Houston’s hot weather—the region got its first real taste of the mid-90s this weekend—will continue for one more day before moisture begins streaming into the area from the south. From late Tuesday through Thursday, a tropical disturbance moving up the coast will bring a healthy chance of rain to the region. While some heavy rain is likely, we don’t have any major flood concerns at this time. The National Hurricane Center gives the system a 60 percent chance of becoming a tropical depression or storm, and the ceiling on intensity is almost certainly a low-end tropical storm. More on this below. 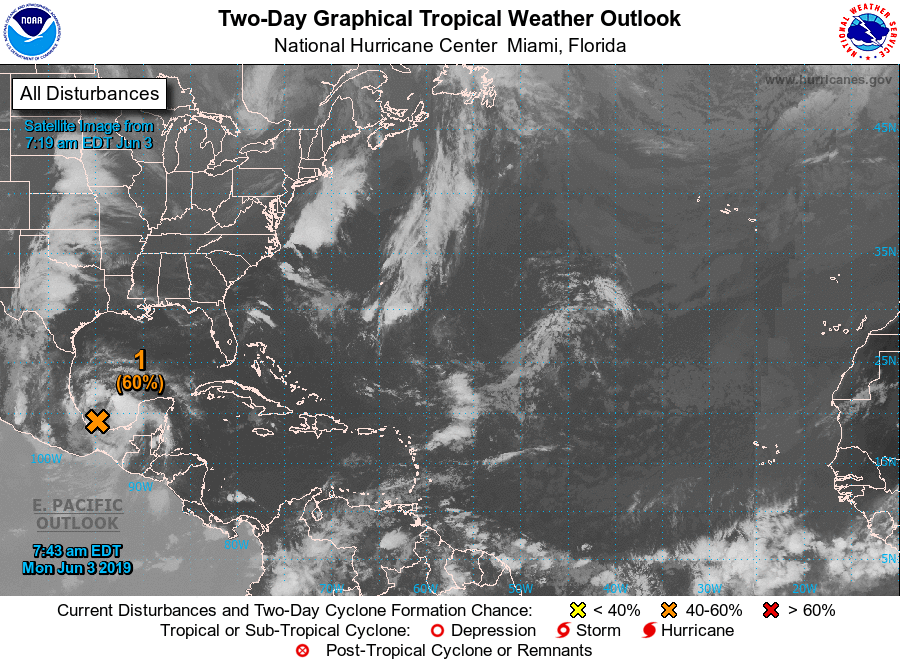 Tropical disturbance status as of 6:30am Monday. (National Hurricane Center)

Conditions today will be a lot like Sunday, with partly to mostly sunny skies, and high temperatures in the low to mid-90s. Sunscreen, water, and repeat. Lows Monday night will only fall into the upper-70s.

Skies will turn partly cloudy as moisture begins to move into the area from the south. Rain chances should remain fairly low—20 to 30 percent —for most of the day before the tropical tropical disturbance begins pulling north toward the region. Timing is a bit tricky, but the heavier rain should hold off through the daytime hours on Tuesday. Highs will be around 90 degrees during the daytime.

Between now and Tuesday night, the tropical disturbance should follow a track to the northwest, toward Brownsville. But by Tuesday night or Wednesday morning, it should follow a more northerly or northeasterly path, likely along the Texas coast, or just offshore. For Texas’ rain chances, offshore would be better because it means reduced rainfall amounts.

Beginning from Wednesday morning, rain chances will be higher in Houston, above 70 percent, and still higher on Thursday as the bulk of the disturbance moves near Houston. Tropical air masses are especially efficient at producing heavy rainfall, but again we’re hoping that the best conditions for heavy rain will set up offshore. If that happens, most of Houston should see 1 to 3 inches of rain through Thursday night, with potentially a few higher bullseyes of perhaps 5 inches of greater. If the tropical disturbance plows into Houston, rain totals will be greater, but for now we expect the former scenario. We’ll continue to watch this closely and apprise you of changes. 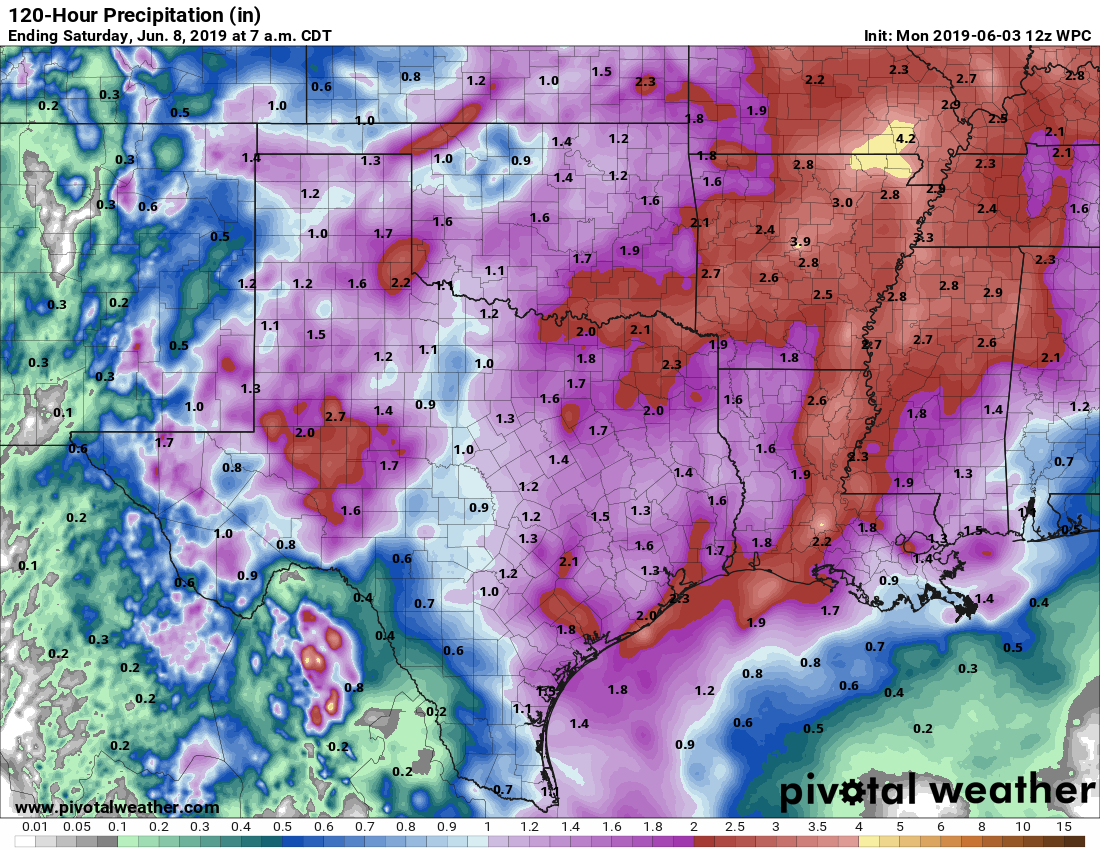 NOAA’s rain accumulation forecast for now through Friday isn’t too bad, but we’re concerned about the potential for higher bullseyes. (Pivotal Weather)

The other concern, for the coast, will be higher tides due to the onshore flow. Right now, it appears as though tides will be about 3 feet above normal levels, but again this is subject to change due to the storm’s movement and strength changes.

Friday through the weekend

Although the bulk of the moisture should move east of the region by Thursday night, we should see some lingering shower and thunderstorm chances on Friday, with highs in the low 90s.

At this point, most of the weekend looks sunny, with hot temperatures in the mid-90s—a lot like what we just experienced this past weekend.