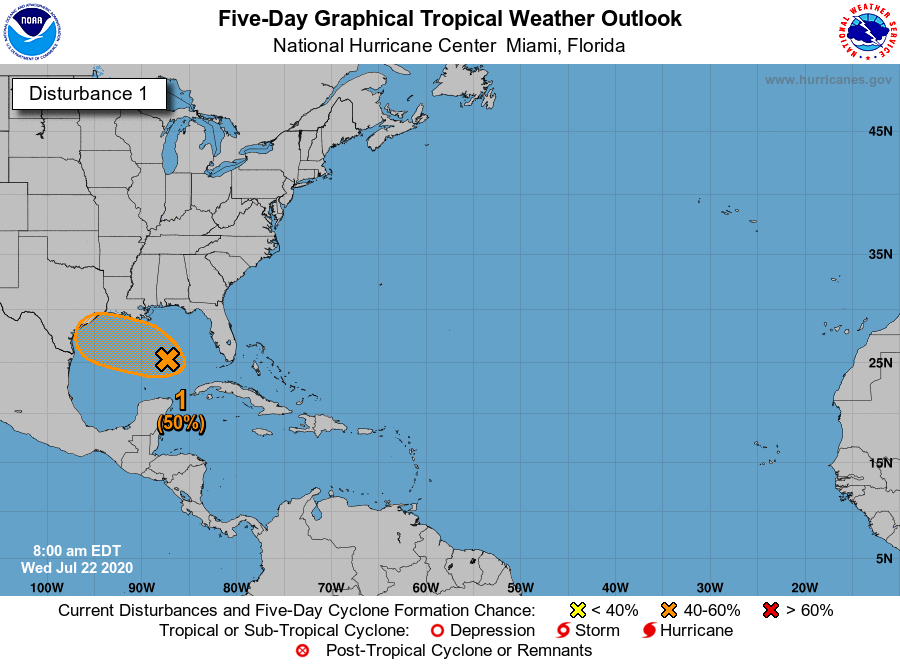 All eyes on a Gulf disturbance for Texas. (National Hurricane Center)

The radar is mostly quiet this morning, with the exception of northward moving storms near Baytown and Channelview. With tropical moisture pushing in from the coast, we expect more widespread storms to develop this afternoon. For the most part accumulations should be less than one-half inch but a few areas may see higher bullseyes—such is the nature of tropical rainfall. Skies should remain partly to mostly cloudy today, limiting highs to around 90 degrees, with light southeasterly winds. This evening and overnight hours should be mostly rain free, although we can’t rule out a few stray showers. 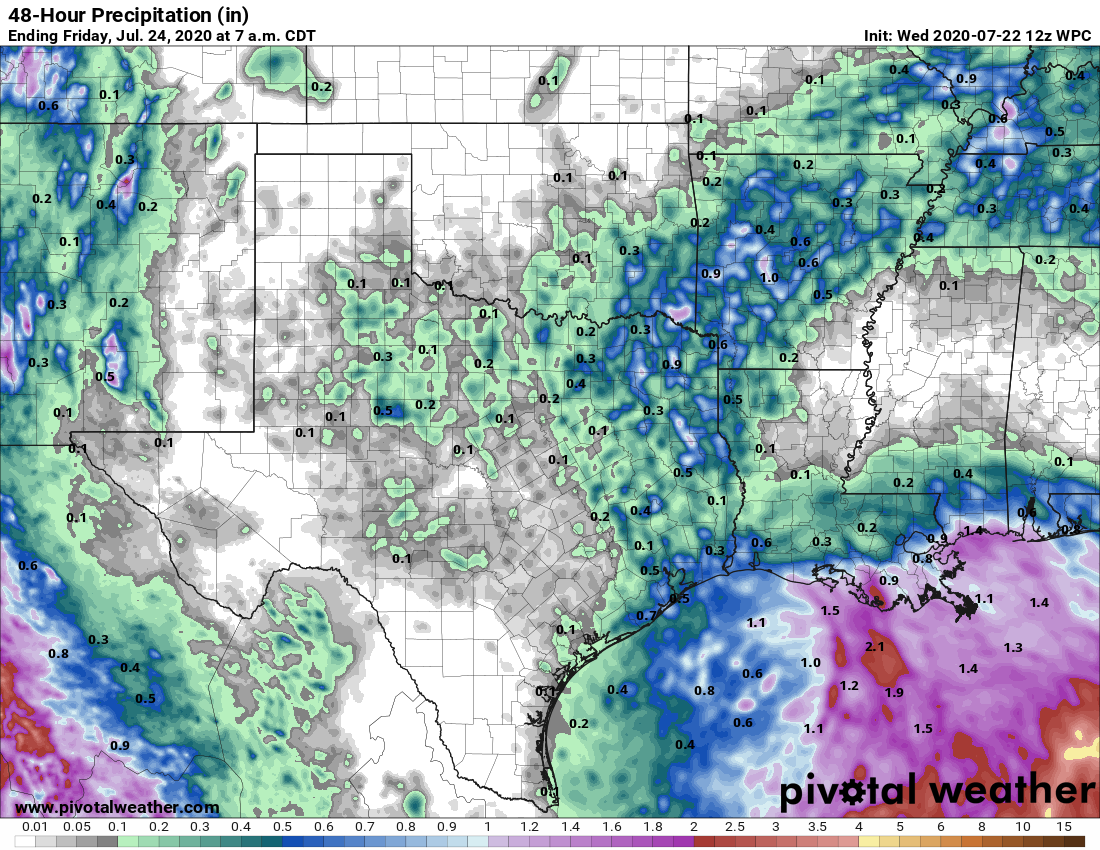 We probably will see a brief reprieve from widespread showers on Thursday as some drier air mixes into the atmosphere. At the surface, conditions will still be plenty humid, however, and combined with partly sunny skies we should see daytime temperatures rise into the mid-90s. These afternoon highs, in turn, could trigger a few afternoon showers, but most of us should remain dry.

Our weekend weather will be determined by the evolution of a low pressure system, tagged as Invest 91L, presently in the eastern Gulf of Mexico. Although wind shear is fairly low, and seas are plenty warm, this system is at present disorganized and encountering some dry air. It has a little more than two days to get better organized to become a depression or tropical storm before making a likely landfall along the Texas coast on Friday night or Saturday. The National Hurricane Center predicts a 50 percent chance of this happening, and we think the odds of this are probably slightly better than 50-50. 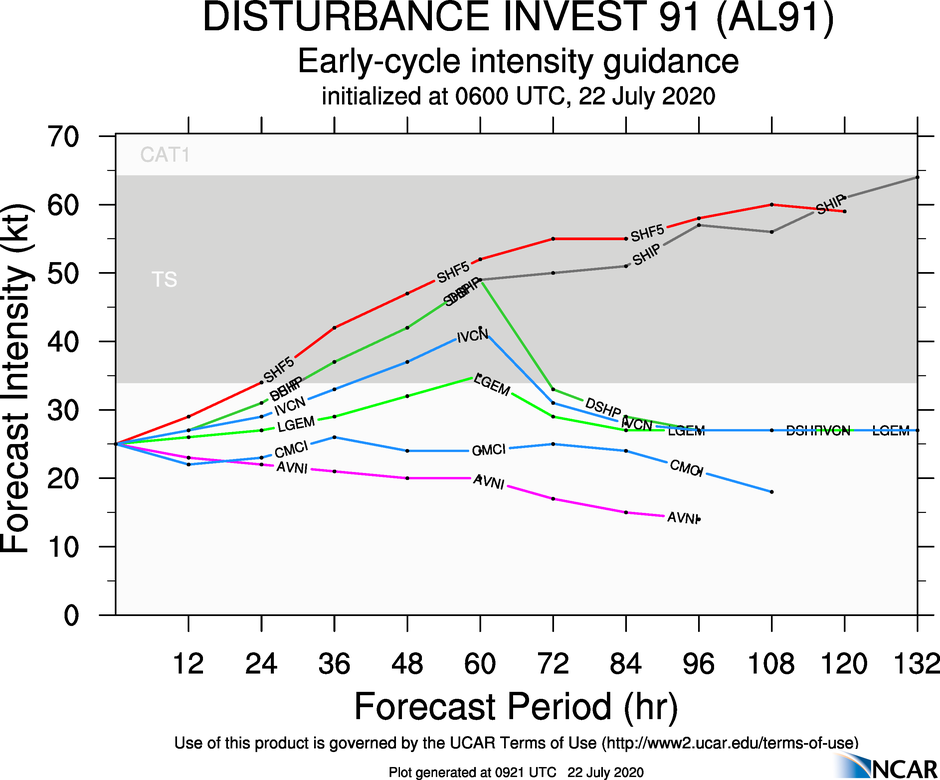 The intensity guidance for Invest 91L is split on whether it becomes a tropical storm, or fails to develop further. (NCAR)

What does seem clear is that the greater Houston metro area will be on the right side of this system, and therefore subject to some of its heaviest rains. However, due to the westward progression of the system, and the aforementioned dry air, at present it does not have the look of a prodigious rainmaker. Right now we would forecast 2-4 inches of rain for most areas (with totals toward the higher end along the coast), with higher isolated amounts. With tropical moisture like this we always are concerned about high rainfall rates, which can back up streets quickly. We’ll be watching for this and updating as needed, but right now we envision a pretty wet weekend in Houston, rather than one with widespread flooding. 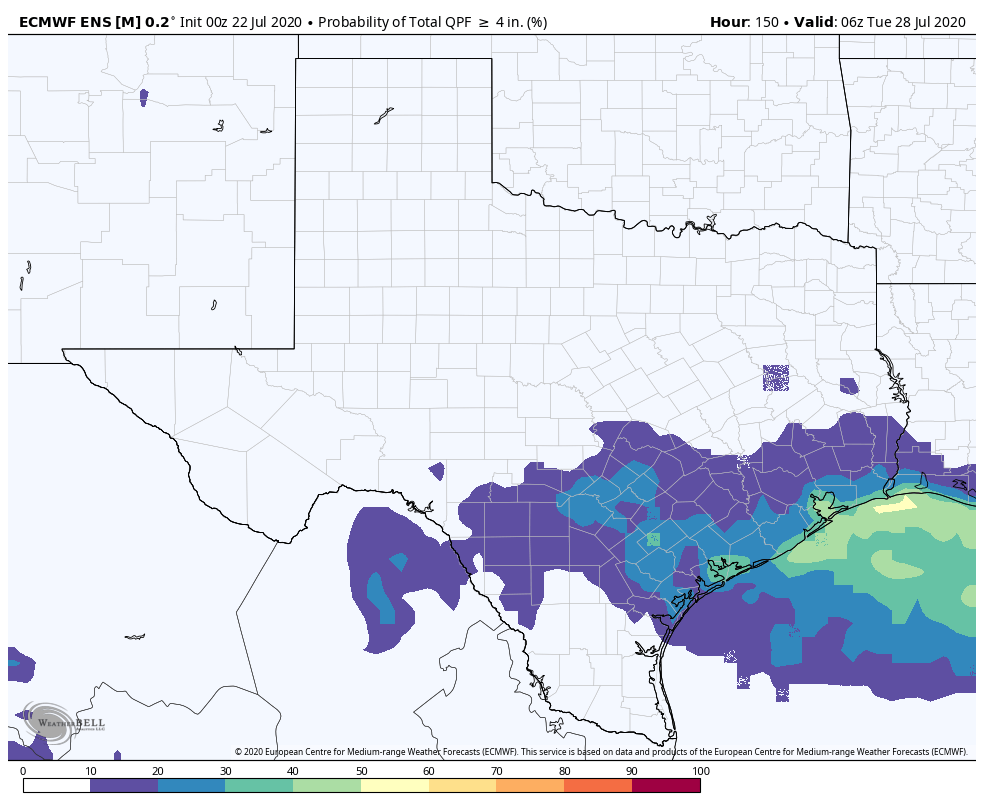 This map shows the European ensemble forecast for probability of rainfall accumulations above 4 inches through next Monday. For coastal areas the probability is 30 to 40 percent, whereas it is less than 20 percent for most of the metro area. (Weather Bell)

With mostly cloudy skies and rains, high temperatures throughout the weekend will struggle to reach 90 degrees.

After Sunday we should transition back to a more summer-like pattern, with highs in the low 90s and a chance of showers.