The 2020 Atlantic hurricane season got off to an early and fiercely active start back in May and early June, which had many people justifiably on edge wondering what was to come. Now, here we are on June 30th and we’ve had one additional storm since Cristobal made landfall in Louisiana at the beginning of June. Things have thankfully slowed down a bit. We’re going to aim to provide sort of a broad overview of the state of the tropics every Tuesday here at Space City Weather, just to keep you apprised of things we don’t make time or space for in the morning updates.

While we will be watching the potential for some kind of hybrid system to develop off the Florida or Georgia coast early next week, we do not see any threats to the western Gulf for the foreseeable future.

Our most recent named storm was Dolly, which briefly threatened some fish in the north Atlantic back on June 23rd. Dolly just missed being the earliest “D” storm on record by 3 days. For those of you scoring at home, the earliest “E” storm was 2005’s Emily, which formed on July 11th. 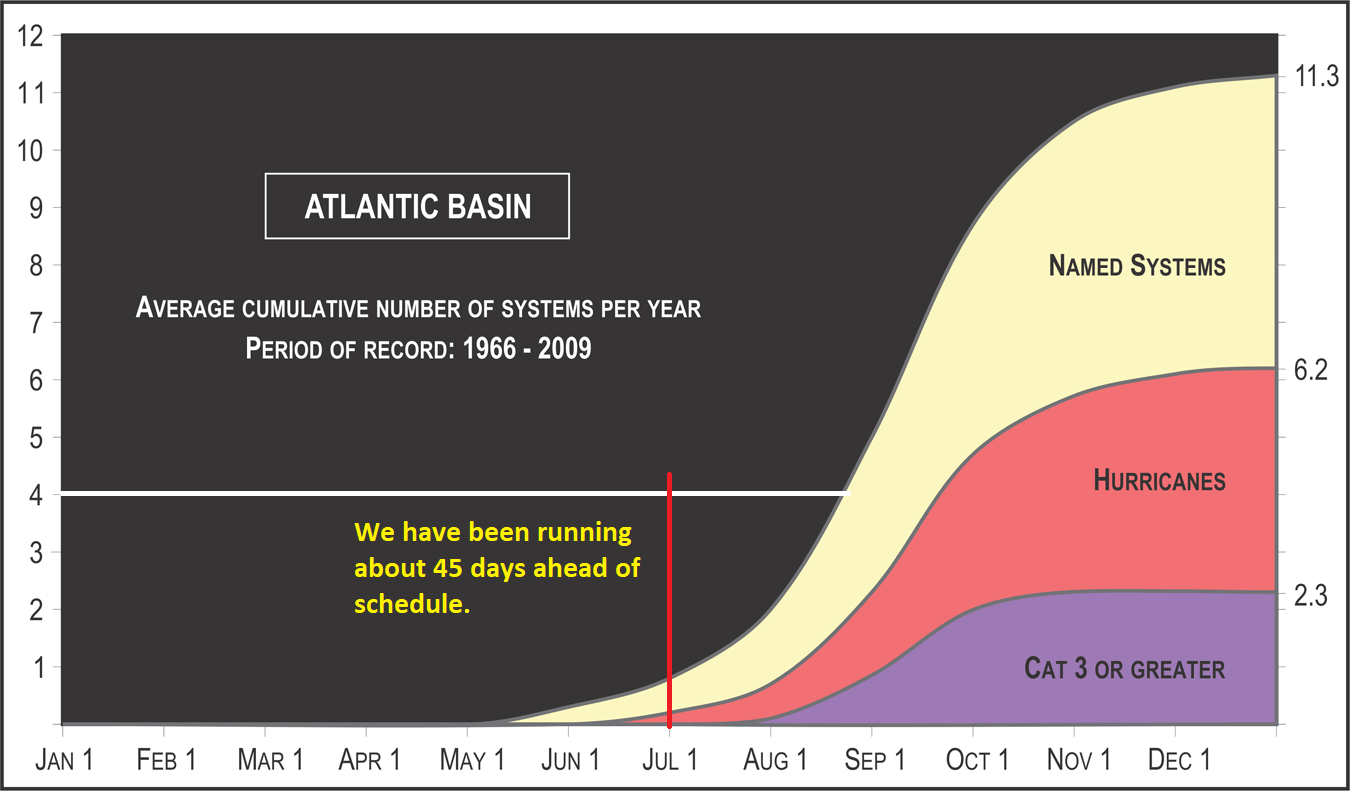 We normally don’t get to the letter “D” storm until mid-August. (NOAA)

But interestingly, even though we’re running about 45 days ahead of schedule in terms of named storms, when you look at cumulative intensity, it’s less impressive. We like to sometimes look at what we call “accumulated cyclone energy,” or ACE to really hammer home how active a season has been to place it in better historical context. We can name more storms now because we have superior technology to even 10 or 20 years ago that allows the National Hurricane Center to name something borderline that might have slipped through the cracks in the past. Stronger storms likely would not have been missed in the past, so ACE provides a good way to almost compare apples to apples better than number of storms would.

So what is ACE? We said there would be no math, so I won’t go into the details of how it’s calculated. Read the Wikipedia article here for more (yes, it’s legitimate and accurate). Essentially, it’s just an equation that factors the length of time a storm had particular sustained winds. The stronger the winds, the longer it maintains strong intensity, the higher the ACE. Since it only factors in wind, by no means is it perfect. For instance, Hurricanes Harvey, Andrew, and Katrina won’t crack the top 25 list of storms that have generated the most ACE because they didn’t last long enough. So in that respect, the calculation is imperfect, but overall it’s a pretty good gauge of where a season stands historically. You can track seasonal ACE in real time here. 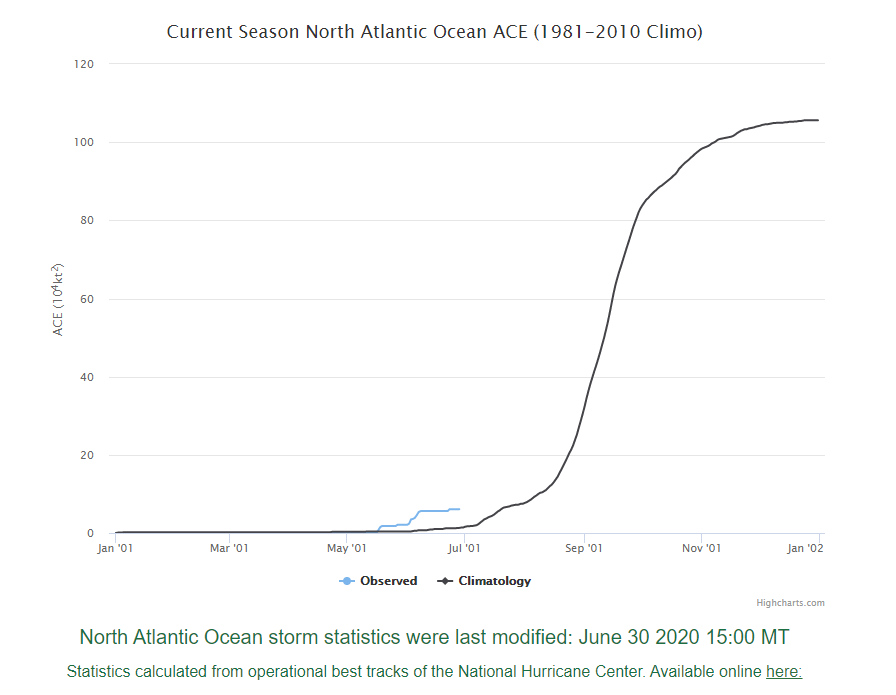 The accumulated cyclone energy for this season so far is running about 3-4 weeks ahead of schedule. (Colorado State)

Regardless of how you want to slice it, we’re off to a fast start, so this pause is welcome.

Things won’t stay quiet forever, and it appears the next opportunity for a system will be sometime later this weekend or early next week, and in true 2020 fashion, it will occur in a peculiar manner. An upper level low over the Northeast looks to exit over the next couple days, but it seems like a weak little lobe off the south side either stays trapped over or drifts into the Southeast. Here’s the latest 500 mb GFS Ensemble mean view through next week, looking at what’s happening 20,000 feet up. Note the light blue color over the Southeast. This is showing an upper level disturbance of some type by the weekend.

The upper level pattern shown here by the GFS and also by the European model suggests shenanigans are possible off the Southeast coast early next week. (Tropical Tidbits)

From here, we start to see <waves hands> things happening. It appears this may gradually transition to a surface low as it drifts eastward, off the Georgia or Carolina coast and it’s plausible to think it could become tropical on its exit out to sea. While this will likely have limited impact to any land mass, we have a legitimate shot at having our earliest E/5th storm on record this year. 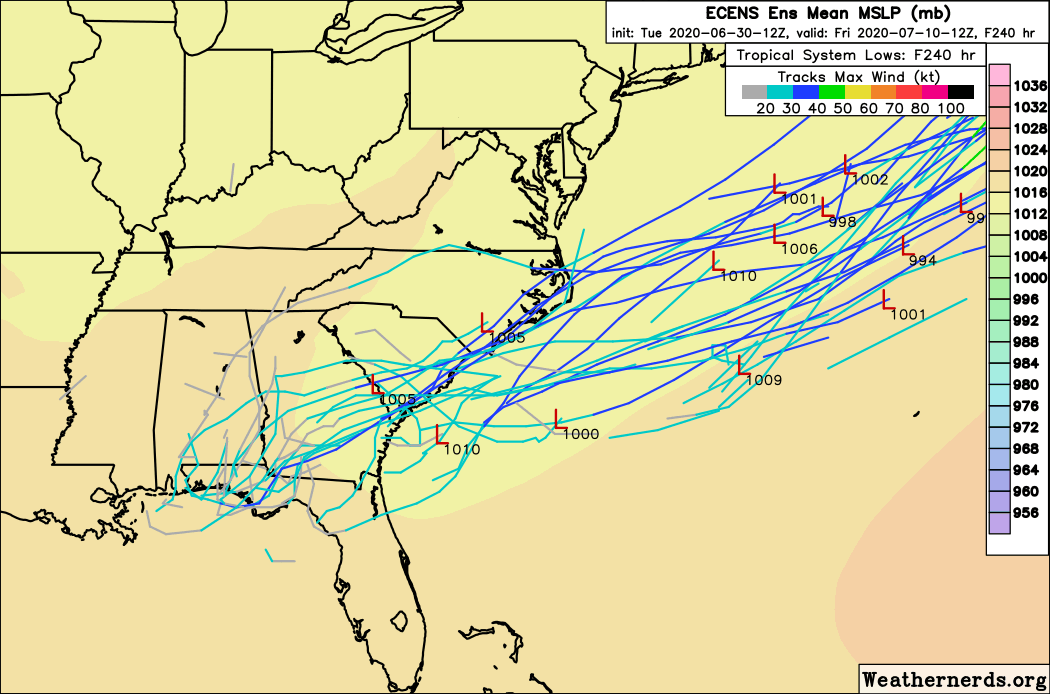 The European ensemble is particularly enthusiastic about a risk for a depression or weak tropical storm to from from the transitioning disturbance over the Southeast early next week. It likely will move steadily out to sea. (Weathernerds.org)

But that’s it; that’s the tropical update for the next 10 days or so. The overall background state of the Atlantic is one that has become more favorable in recent days. I won’t delve too much into the meteorology here, except to say that we’ve had some shifts in the atmosphere over the tropics that should, in theory, allow for a few more waves. But you’ve seen the Saharan dust here in Houston. It’s out there, and it’s widespread. 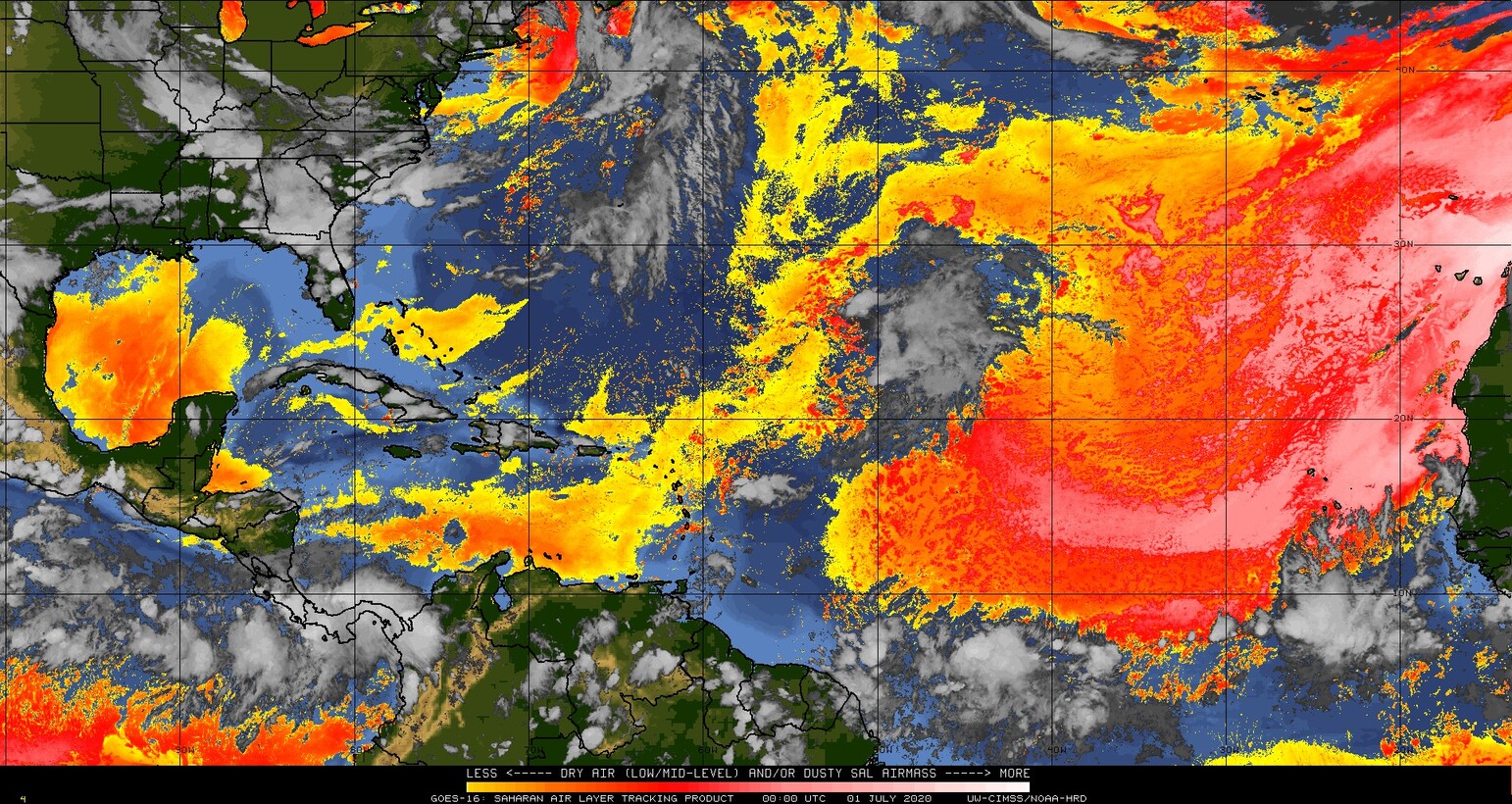 Yellow, orange, red, Saharan dust is all over. (University of Wisconsin CIMSS)

Anywhere you see yellow, orange, or red on that satellite image is an indication that dust is present. It’s all over the Atlantic basin right now, not necessarily abnormal for this time of year. But where you have dust, you have drier air and a less hospitable environment for tropical development. Suffice to say, with this all over, conditions right now are not ideal for tropical development in the Atlantic basin. In addition, you still have a good bit of shear as well. So the basin isn’t completely immune to storms, but it’s rather inhospitable.

Is there anything happening in fantasyland on the models? Nope. Things look quiet right now as we head through early or mid-July. Short of something rogue like this thing off the Southeast coast next week, we don’t expect much through mid-month. So breathe easy here in Houston for the time being. We’ll check back in on things in a week.

3 thoughts on “Tropical update: After a rapid start, the season has slowed down”