Houston’s weather will remain hot for a few more days as the region flirts with high pressure, but as we head into August it doesn’t look as though the region will immediately fall under a classic “ridge of death” that stifles rain chances. Quite the contrary, later next week could be fairly wet and a bit cooler.

Moisture levels have jumped back up today, and we’re likely to see at least some scattered showers this afternoon across the area. I think it’s even possible that most areas will see some light to moderate rainfall, but I wouldn’t bet on that. In any case, more clouds should hold temperatures in the low- to mid-90s.

High pressure builds in somewhat, and this should limit shower activity and bring out the sunshine. I’d expect highs to jump up accordingly, into the mid- to upper-90s. Either of these days could bring temperatures of 100 degrees for inland areas, so be prepared for the heat.

But unlike a lot of summers in Houston, the high pressure isn’t going to build directly over Houston, and in fact should begin to recede to the west by this weekend. Saturday could still be pretty hot, in the mid-90s, but Sunday should be cooler due to increasingly cloudy weather. Right now I’m not overly bullish on rain chances this weekend. I think Saturday will probably be dry for most people, but Sunday could bring some light to moderate rainfall for 30 or 40 percent of the area. 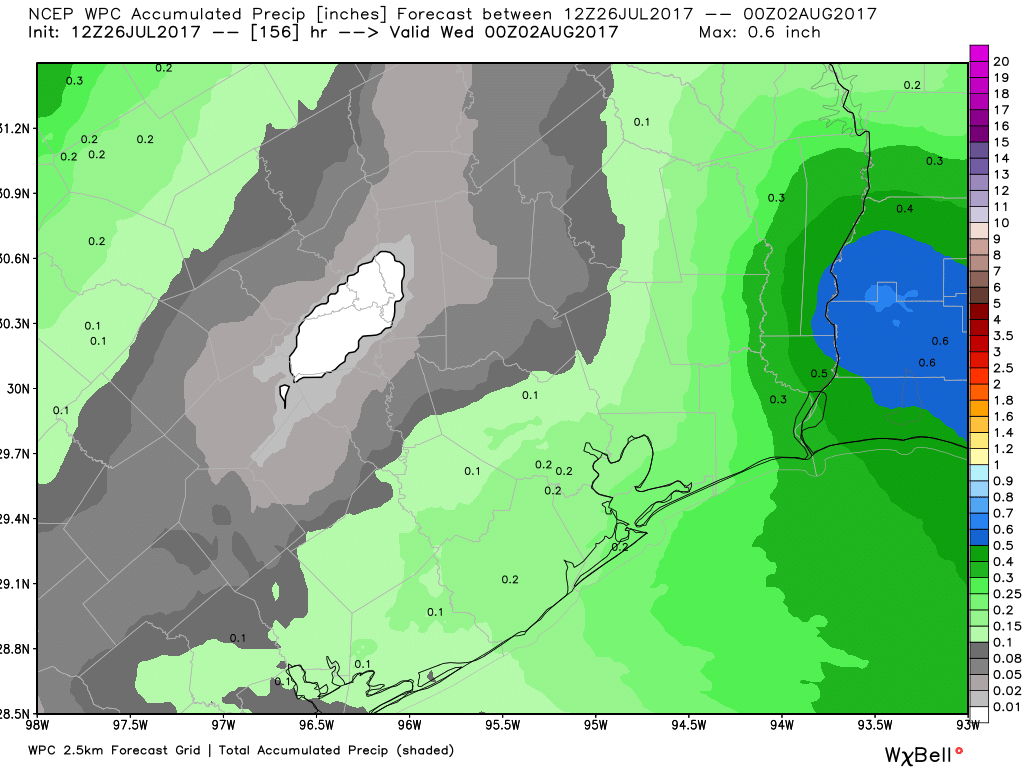 Overall, don’t expect rain accumulations to be too great through next Tuesday. (NOAA/Weather Bell)

August begins next Tuesday, but as of now it’s sure doesn’t appear as though it will feel like it. Our rain chances will depend upon the influence of the high pressure system off to the west, but at some point it’s likely to move far enough away to lead to mostly cloudy days, healthy rain chances, and highs of around 90 degrees. For August, this would be pretty grand weather for Houston.

Posted at 7:45am CT on Wednesday by Eric

8 thoughts on “High heat this week in Houston, a bit cooler next”