Quick local note: Strong to severe thunderstorms are racing through the Houston metro as of 5:30 PM. We expect these to drop south and east through 7 to 8 PM, bringing much of Houston a burst of heavy rain yielding perhaps 1 to 2 inches, as well as gusty winds. Areas south and east of Houston are likely to see some heavy rain from this as well. Areas north and west of Houston are mostly done with storms now or should be soon. The storms should begin to diminish and shift offshore after sunset. 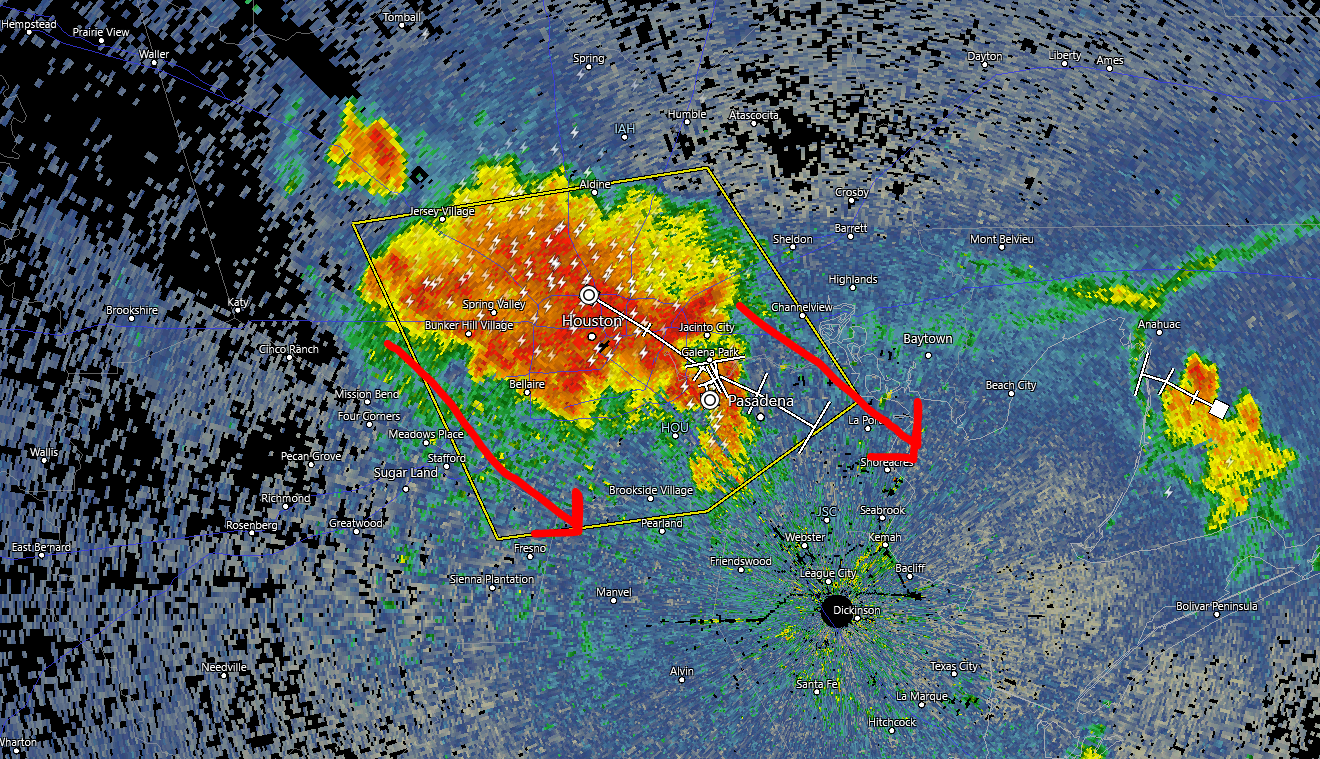 On to the tropics. Interest regarding Hurricane Dorian has spiked today as the track has shifted a bit and the upgrade to a hurricane occurred this afternoon. We’re here to walk you through what the future may have in store regarding Dorian.

Hurricane Dorian is likely to impact the Florida Peninsula around Labor Day before heading into the eastern Gulf of Mexico where it could impact the eastern or central Gulf Coast next week, east of Texas, though there is still some degree of uncertainty.

Dorian is located just northwest of St. Thomas in the U.S. Virgin Islands, as of the National Hurricane Center’s (NHC) 4 PM CDT advisory. Satellite shows a fairly healthy looking system that has managed to keep itself together in the face of adverse conditions around the storm.

Dorian’s maximum sustained winds are 80 mph, and it’s currently moving to the northwest at 14 mph.

Through the holiday weekend

Dorian will take a cruise east of the Bahamas over the next couple days. As this occurs, high pressure over the Atlantic is going to begin building back to the west. This will force Dorian to begin to turn more to the west instead of northwest by the time we get to Friday night or Saturday.

High pressure building from near Bermuda west to the Southeast will force Dorian to turn west toward Florida over the weekend. (Pivotal Weather)

Around this time, forecast uncertainty begins to rapidly increase, unfortunately. The most likely scenario right now indicates that Dorian will remain on a westward heading toward the Florida Peninsula. Whether that’s aimed toward Miami, West Palm, Vero, Melbourne, or somewhere else is contingent on when Dorian turns and how sharp of a turn it is. Thus, you have to assume that at this point, the entirety of the Florida Peninsula needs to monitor Dorian’s progress, and they are all in the cone of uncertainty still. 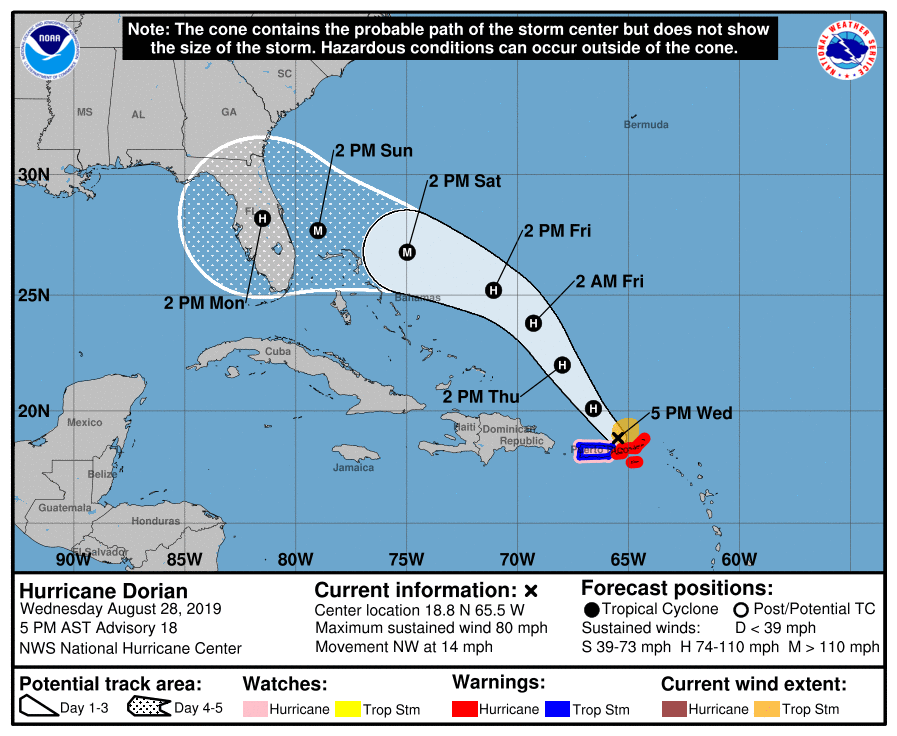 The NHC forecast for Dorian shows a major hurricane approaching somewhere along the Florida Peninsula on Labor Day. (NOAA)

If you are planning a Labor Day weekend trip anywhere on the Florida Peninsula, you must be aware of this storm and that there is an increasing chance of some kind of impact beginning later Sunday or Labor Day Monday. We can’t tell you specifically what to do, but it’s a scenario you need to be aware of.

Uncertainty roofs beyond Monday regarding Dorian’s track. Much will depend on what’s happening over the Plains, how strong a trough of low pressure is across the Midwest and Mid-Atlantic, and ultimately how much the high pressure ridge over the Atlantic wants to build back to the west. This means numerous scenarios involving Dorian are in play.

An example of how much uncertainty there is beyond ~ day 3. Each "L" on this @Weathernerds map represents where the 51 Euro ensemble members places Dorian's center on Tues AM. This is a tremendous spread in possibilities, underscoring the need to not take any 1 solution literally pic.twitter.com/ERN1QZy3aP

The most likely scenario at this point, or at least the one favored by most weather models and ensemble members involves Dorian moving into the eastern Gulf of Mexico and then gradually turning to the northwest and north toward the central or eastern portions of the Gulf Coast. While we continue to believe this will not ultimately be a concern for Texas, we should continue to monitor Dorian’s progress through the weekend, especially given the high degree of uncertainty that exists right now. We will gradually gain some color on this tomorrow and Friday and can hopefully completely rule out certain possibilities for us here.

The bottom line on Dorian:

That other Gulf system

Eric this morning noted the other feature we’re watching: A disturbance near Cuba. We expect that to arrive in the southern Gulf of Mexico this weekend. Weather modeling this afternoon continued to keep that pointed mostly well to our south and either into far south Texas or Mexico by midweek next week. Most also did not suggest it would strengthen a whole lot. Still, given the uncertainty surrounding Dorian and any potential interplay between Dorian and that disturbance (the systems won’t merge, but one could impact the other depending on location and intensity), we are going to continue to watch this one. The disturbance could also become a significant rainmaker for parts of South Texas or Mexico.

The good news is that after these two systems run their course, conditions look quiet in the Gulf again for a little while. More from Eric on Thursday morning.