On Wednesday, for Houston’s now-daily game of rainfall roulette, the Inner Loop area of the city generally “won” the contest with 2 to 3 inches of rainfall. Meanwhile, most of the suburbs were dry, or saw only a few raindrops. This pattern will likely continue through the work week, although the intensity of storms today and Friday hopefully won’t be quite so high.

Today will be hot and mostly sunny, with high temperatures in the mid-90s. We’ll see our usual ramp up in storm activity this afternoon, but high-resolution models indicate that storms won’t be as widespread or as intense as Wednesday. As usual, storms should wane with the loss of daytime heating, and nighttime temperatures probably won’t fall much below 80. 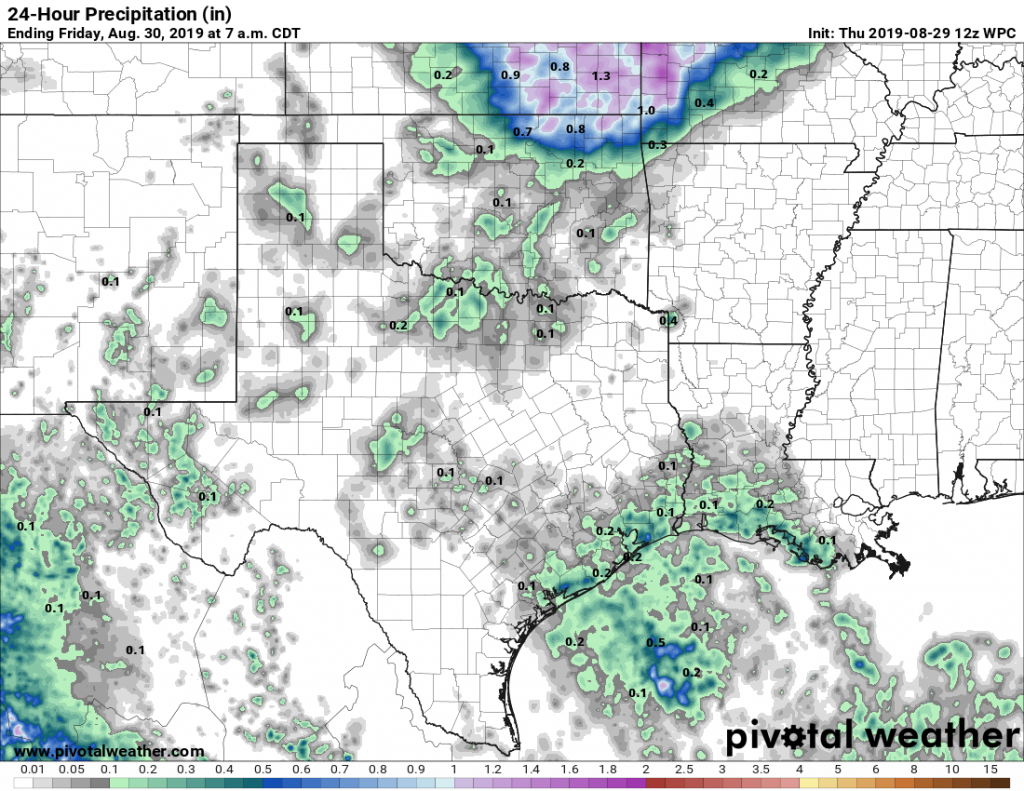 Rain chances on Thursday will be a little better along the coast. (Pivotal Weather)

Another day like Thursday, although rain chances may take another step backward, with perhaps only 20 percent coverage during the afternoon and early evening hours.

Drier air from a dying front should make for a pretty nice—all things considered—Labor Day Weekend. Expect high temperatures in the mid-90s, with mostly sunny skies. Lows at night may get into the mid-70s for central and northern parts of the metro area, so mornings and evenings may be a smidge more pleasant than we’ve seen. Finally, rain chances will be very low.

Moisture levels start nudging back up, so I’m a little more bullish on Labor Day’s rain chances now, as they’re probably about 30 percent.

Our overall weather pattern next week will be determined by the “unnamed feature” I mentioned yesterday, an atmospheric low pressure system that will be drifting westward across the Gulf of Mexico. Right now the preponderance of the models drag it southwest, toward Mexico, rather than Texas. This is due to higher pressure building over Texas. Frankly, the second half of next week looks like pick-your-poison: Potentially heavy rain from the Gulf of Mexico, or stultifying high pressure that drives temperatures back up to near 100 degrees with plenty of humidity.

Matt did a fine wrap-up of Hurricane Dorian on Wednesday evening, and we remain concerned about the storm’s potential to bring very severe weather to Florida, and potentially other parts of the Southeastern United States. Right now the storm is fighting some drier air to its east, but over the next two to three days it should find ideal conditions near the Bahamas to strengthen, with warm water, low wind shear, and a favorable upper atmosphere pattern. The National Hurricane Center forecasts that a strong Category 3 Hurricane will strike Florida on Monday, but frankly it could be even stronger than that. 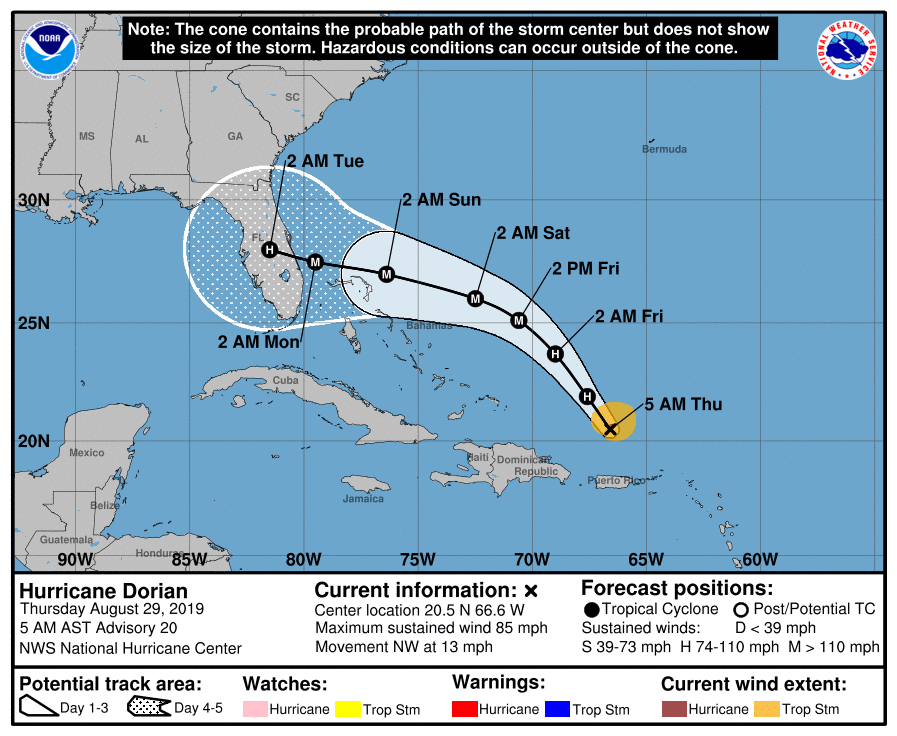 Frustratingly, there remains a wide spread in landfall locations along the Florida coast, and this is due to questions about the strength of high pressure over the Southeastern United States. Our best guess is somewhere between Fort Lauderdale and Titusville.

If you live in Florida please pay close attention to the storm, and heed any evacuation warnings. At this point, we have every reason to believe the state is going to get hit very hard by Dorian. We’ll have a Dorian-specific update this afternoon.

11 thoughts on “Summer rambles on for Texas, Dorian coming for Florida”