Autumn is often a time for weather forecast headaches. We’re wasting no time this season, with our first legitimate cold front of the season knocking on the door next week, though there’s a good chance the door won’t open. Let’s talk details.

First, the “easy” part of the forecast. Summer-lite continues the next couple days. We’ll see some showers and perhaps some thunderstorms off the Gulf each morning and afternoon. These will be of the typical Southeast Texas scattered and hit/miss variety. If you have outdoor plans the next couple evenings, go ahead with them, but just know there may be a downpour or two to contend with. 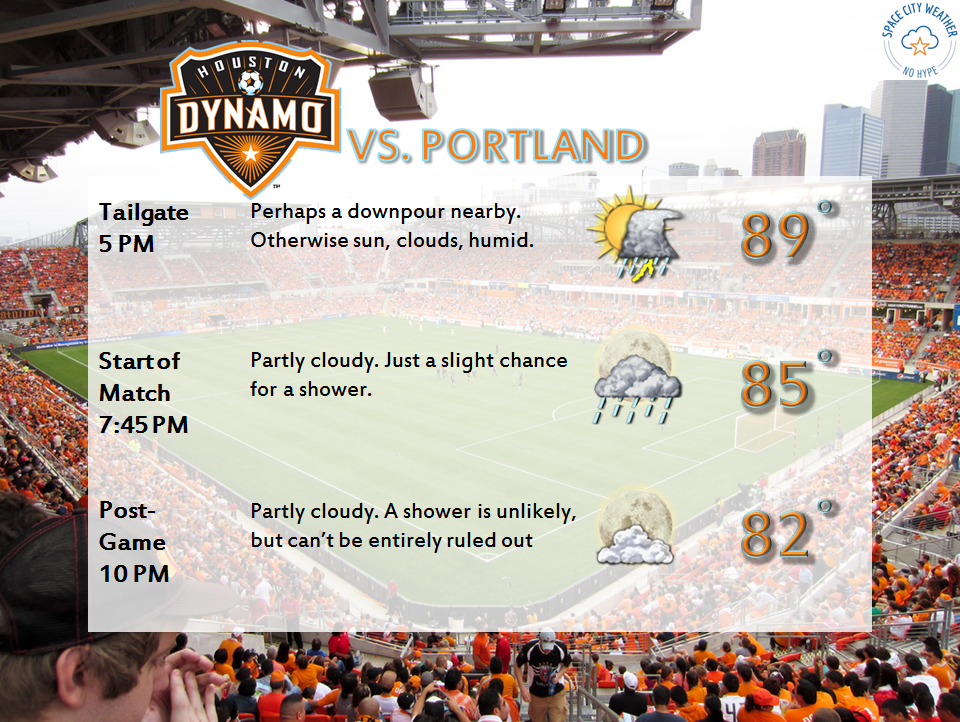 Heading to the Dynamo match, Rice game, or Astros game? Maybe a downpour, but not terrible.

Temperatures will remain on the warmer side. Expect highs near 90 or in the low 90s. Overnight lows will remain miserably warm, in the mid to upper 70s inland to near 80 at the coast.

Alright, let’s talk cold front. On Sunday afternoon, the models are in good agreement that the front will be exiting the Panhandle region on its way to Central Texas. A simple way to see this is by looking at dewpoints.

Models are in decent agreement and have the front moving out of the Texas Panhandle on Sunday afternoon. (Weather Bell)

Ahead of it, expect plenty of humidity and mid to upper 80s, along with scattered showers and thunderstorms. I don’t think Sunday is a washout for us, but there will almost certainly be some downpours to contend with across the region. From this point on, the models get messy almost to the point of being useless. I see three reasonable scenarios that could play out here.

Scenario A: “I promise to never let go.” – Summer. This is what yesterday afternoon’s European model liked. Basically, the front gets to maybe I-35 and then stops forward progress. This means continued high humidity, temps in the upper 80s to near 90 (AM lows in the mid to upper 70s still), and daily scattered thunderstorm chances into much of next week, but only locally heavy rain. This would probably the option most of us hate.

Scenario B: “You will try…” In this scenario (which would a hybrid split between the GFS and Euro), you’d end up with the front getting to Eastern Texas or near Houston and then stalling. This would mean cooler temperatures, but not quite like autumn; perhaps something like low 80s during the day and low 70s at night. We’d still have plenty of humidity, and we’d have repeated chances of showers and thunderstorms daily next week. This wouldn’t be particularly ideal, but at least it would be a bit cooler, right?

Scenario C: “The end of summer….for now.” This is what I think most of us are rooting for. The front sweeps through Houston Monday sometime, and we end up refreshed, with drier air and comfortable temperatures early next week. Rain would be in a band Sunday night and Monday as the front moved through, would add up to an inch or so maybe, and then be on its way. Autumn bliss, at least for a few days.

The European model (left) and GFS model (right) show distinct temperature differences in SE Texas Tuesday evening. The Euro keeps us near to above normal, while the GFS pushes the front through. (Weather Bell)

All that said, while I want terribly to give Scenario C and a couple days of autumn the best chance here, I cannot. I’m not an odds-maker, but if I had to assign percentages to the 3 scenarios outlined above, I would currently give A about a 40% chance, B a 40% chance, and C a 20% chance. I just can’t get optimistic about this front given the latest model data.

The European model throws an interesting curve ball though. It basically stalls and weakens the front to our west, so it never gets through Houston. However, by Thursday, it brings a weak front in from Louisiana, which would serve to knock down the humidity but not cool us off much. Something to watch.

At this point, I’d expect slightly unsettled weather much of next week, with highs in the mid 80s and lows in the mid 70s. As you can see, there are still options out there, so this forecast could very well change over the weekend. We’ll stay on top of it for you and update you tomorrow or Sunday on the latest.

14 thoughts on “Will our first autumn front arrive?”