Good morning. There’s a lot to discuss this morning, including some uncertainty in the near-term forecast, a bonafide fall-like weekend ahead, and a strengthening Tropical Storm Zeta. So let’s jump right in.

Skies are generally partly cloudy across the region and will likely remain so during the daytime. High temperatures for most areas should reach around 80 degrees. The big question remains the timing and impact of a front moving in from the northwest. It should reach areas west and north of Houston by roughly around sunset, plus or minus an hour or two. Some scattered showers and gusty winds are possible, but we’re not anticipating any strong storms with this front. The front should keep on moving, but it’s difficult to say how far it will get—the Interstate 69 corridor? All the way to the coast? The bottom line is that if you live in the western half of Houston, you’re waking up to cooler, drier air on Tuesday morning. If you’re southeast of I-69? We’re making no promises. 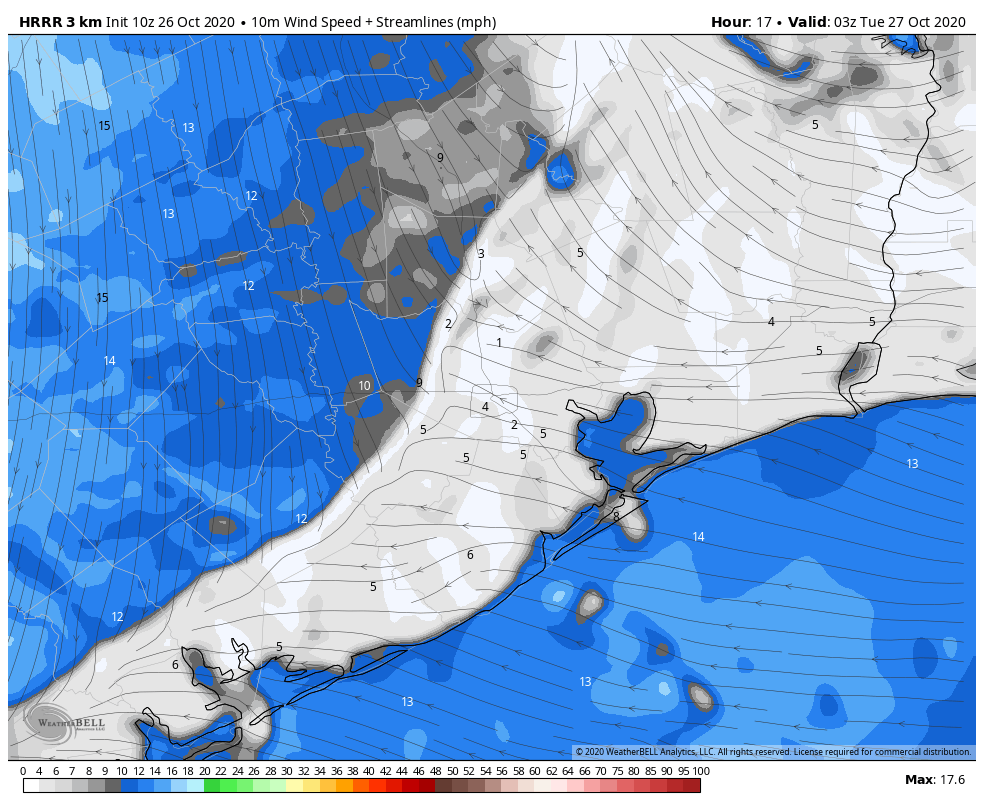 High temperatures on Tuesday will likely fall somewhere in the 70s for most people, with partly to mostly cloudy skies. Dewpoints will depend on how far east the front makes it. This frontal boundary should linger nearby, so we may see some additional, mostly light rain.

Conditions may be a bit warmer and muggier on Wednesday morning, but during the afternoon and evening hours we expect a stronger front to push through. Unlike several recent cool fronts, we expect this one will have sticking power, bringing cooler weather and lower dewpoints into the region through much of the weekend. I have some hope that most areas will also see some precipitation with this front, and as a guess I’ll go with 0.25 to 1.0 inch of rain through Wednesday night. The front should drop Wednesday night’s temperatures into the 50s.

We still have some questions about the strength of the front, but generally I think we’ll see highs in the low- to mid-70s through the weekend. As for low temperatures, they’re likely to vary from 40s for areas well inland (i.e. Conroe) to 50s for the city of Houston generally. This will be some of the coolest air of the season, and it will be sustained for several days. We also should see mostly sunny skies through the weekend. Cannot wait! 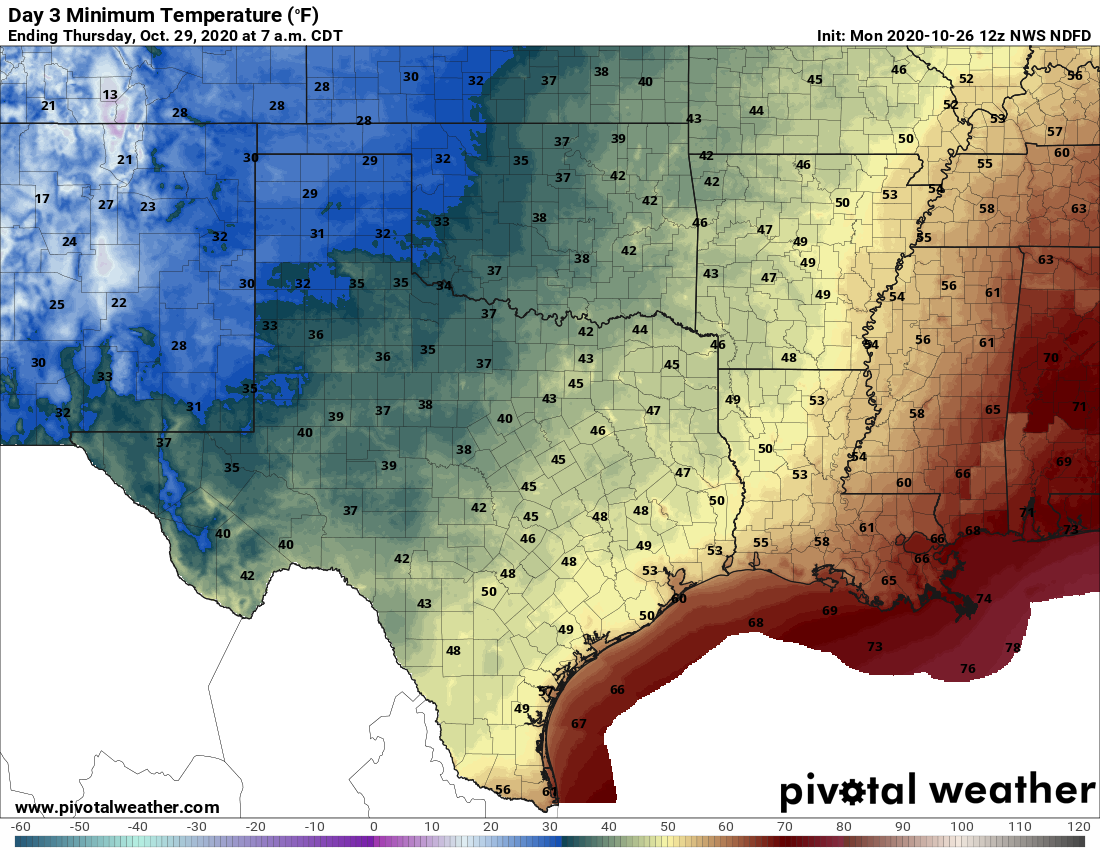 A gradual warm-up should begin by Monday or so, but temperatures should remain mild.

As anticipated, Tropical Storm Zeta formed this weekend, and after meandering around the Caribbean Sea it has begun a motion to the northwest. For much of the weekend, the track models were widely divergent in terms of where Zeta will go along the northern Gulf of Mexico coast. However, with better data, the models are now tightening in their solutions, showing a landfall somewhere along the central or southeastern Louisiana coast on Wednesday evening or Thursday morning. The track forecast from the National Hurricane Center captures this well: 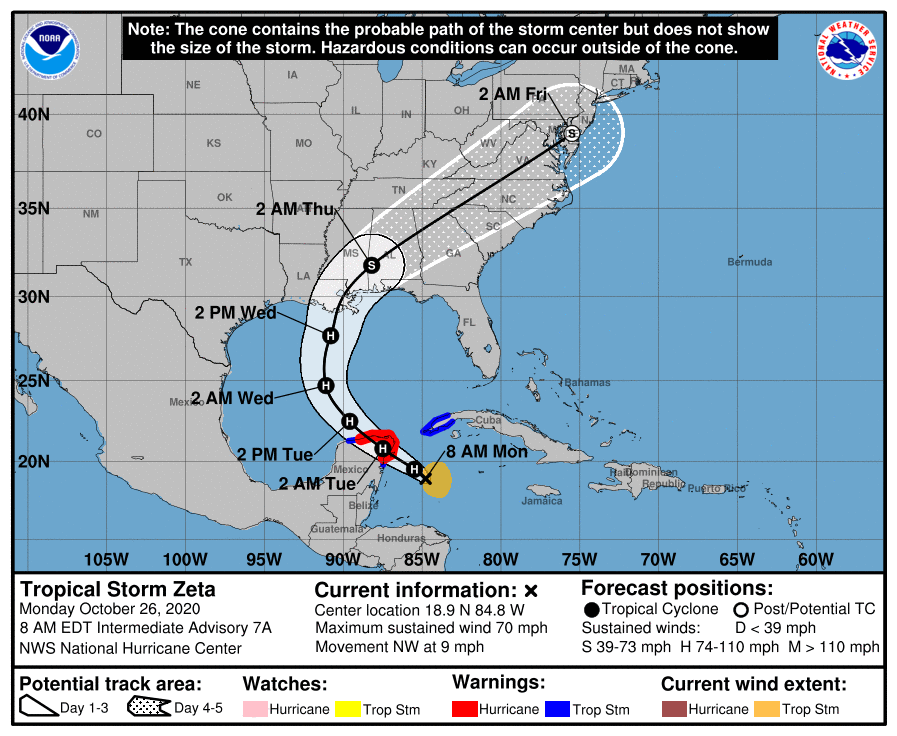 Unfortunately, Zeta has found low shear in the northwestern Caribbean Sea during the last 24 hours, and has now strengthened to near hurricane status, with 70 mph winds. Tonight the storm will make landfall—likely as a Category 1 hurricane—in almost the same location struck by Hurricane Delta only three weeks ago. Then the storm will move into the Gulf of Mexico. Zeta is likely to remain a Category 1 hurricane over the southern Gulf of Mexico before reaching cooler seas and increasing shear in the northern Gulf. It likely will make landfall in Louisiana as a strong tropical storm, although some uncertainty remains—more misery the state does not need.

29 thoughts on “Zeta bound for Louisiana, Houston to see its first sustained stretch of fall”