Good morning. Some areas of dense fog have developed north and west of Houston this morning, but it should burn off entirely within a few hours of sunrise. For this week the region will fall into a pattern of a day of rain chances, followed by one to two sunny days, and then more clouds and rain. Fortunately, right now, it appears as though sunshine will align with Saturday and Sunday. This will probably make for a fine weekend.

Low temperatures this morning in the upper 50s should rise to around 70 degrees this afternoon under mostly sunny skies. With calm winds slowly turning to the southwest this afternoon, it’s going to be a gorgeous day for whatever you need to do outside. Lows tonight will generally fall into the mid-50s again tonight with the likely redevelopment of some fog for the southern half of the Houston region. 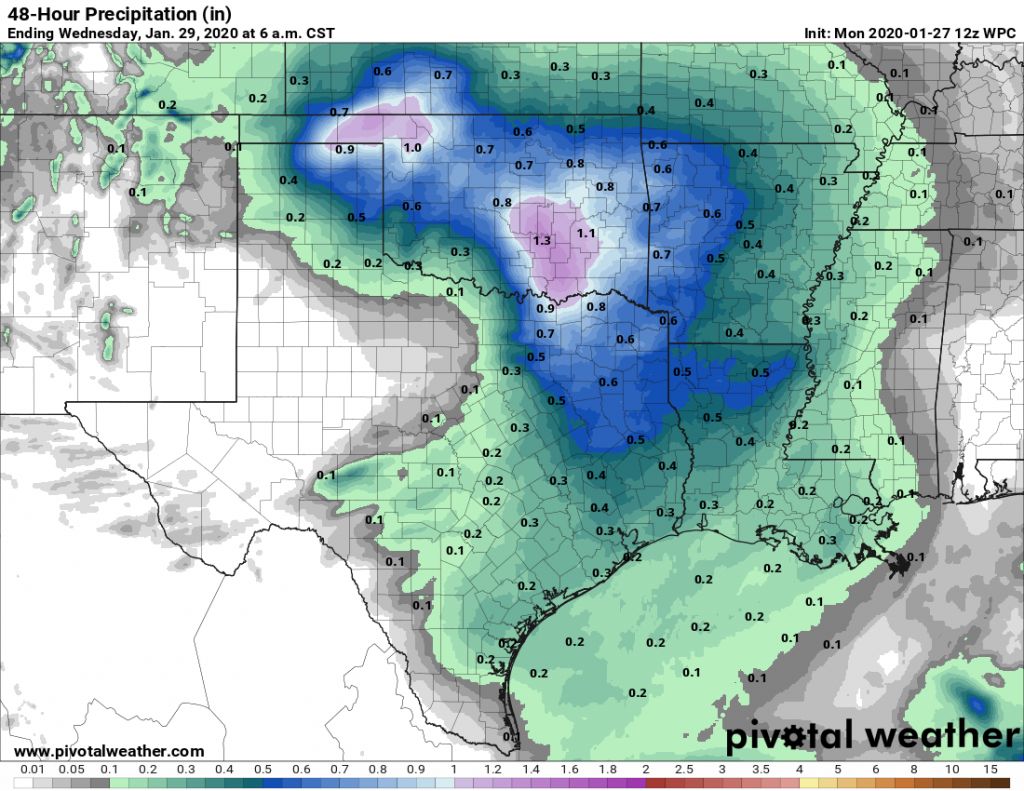 This will be a gray day. Likely beginning some time during the mid-morning hours, light to moderate rainfall will begin to spread over most of the Houston area. A slightly more organized band of showers may work its way through during the afternoon or evening hours, but for the most part we expect accumulations on the order of a few tenths of an inch of rain. A cold front will sweep through during the evening, likely between 6pm and 10pm, bringing stronger winds (likely gusting above 20mph) and drier air. Skies should clear out Tuesday night, with lows dropping into the 40s.

END_OF_DOCUMENT_TOKEN_TO_BE_REPLACED

Quick note: If you were woken up by or heard/felt an explosion this morning, you were one of many. There was indeed an explosion northwest of Houston near the intersection of Gessner and Clay Road. This is just south of 290 and east of the Beltway. As is often the case in situations like this, weather radar picked up the actual explosion or fire.

I’ve seen people as far away as Clear Lake hearing the explosion. We send our best to readers in that part of the area that may be cleaning up this morning. An unfortunate morning northwest of Houston.

On to weather, we are back into a really nice pattern today, but we do have a couple minor issues to discuss for the weekend.

Friday should be a beautiful day with sun, light winds, and highs reaching into about the mid 60s.

While I believe we will start out with sunshine, high clouds should begin moving into the region in the morning. The day will get progressively cloudier from there. Clouds thicken up in the afternoon, and at least a slight chance of light rain or some showers will begin by late afternoon. The best chance for seeing some of that rain during the daytime hours will be south of Houston, particularly from Freeport south through Matagorda Bay. Most areas north of Houston will likely remain dry during the daytime Saturday. Temperatures will warm from the mid or upper 40s in the morning to the mid 60s or so in the afternoon.

From Saturday evening through Sunday morning, it will be fairly dreary across the region. Look for periods of mostly light rain and showers. A brief period of heavier rain cannot be entirely ruled out, especially along the coast. So if you placed an “X” over downtown Houston, areas to the south and east of there have the chance to see some higher rain totals. Inland from Houston, the odds drop off for seeing anything heavy. 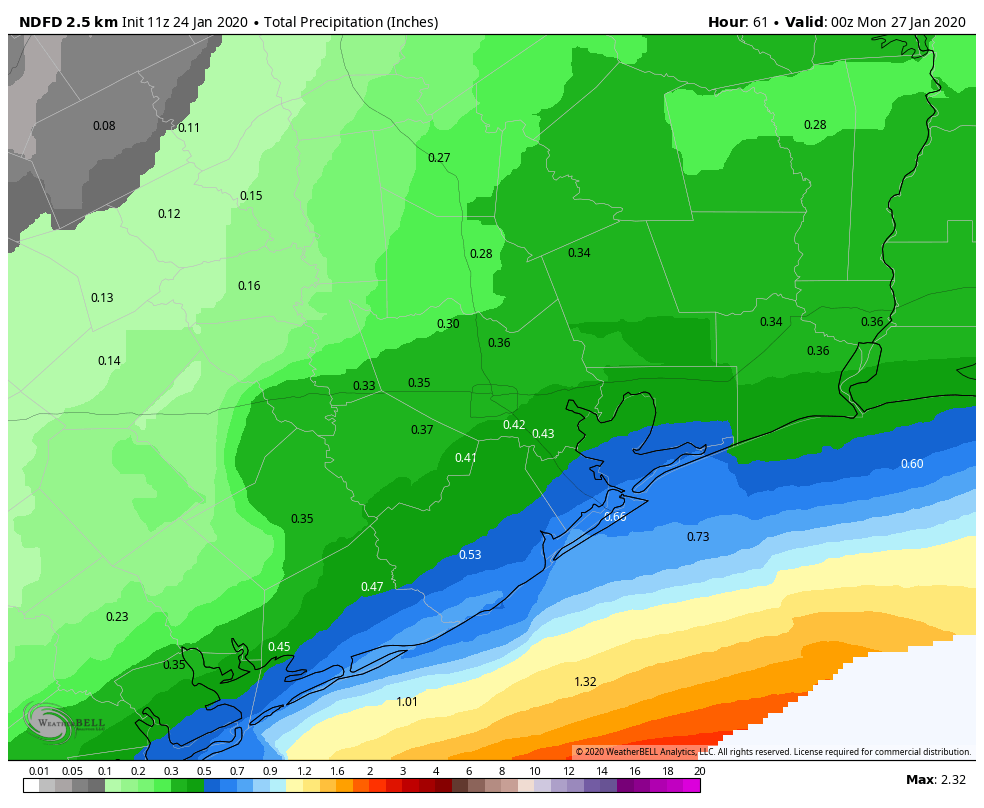 Rain totals from Saturday night and Sunday should be manageable, although a few areas southeast of Houston may see higher amounts than shown here. (NWS via Weather Bell)

Regardless, no serious flooding is expected, and rainfall totals should be manageable across the vast majority of the region. It will just be a fairly dreary Saturday night and Sunday.

END_OF_DOCUMENT_TOKEN_TO_BE_REPLACED

Wednesday’s rainfall provided a good soaking for the region, with generally 0.75 to 2.0 inches of rain falling across Houston, and slightly more along the coast. It made for a rather dreary day and night, but at least the mostly light- to moderate nature of the rainfall posed no problems. Looking ahead, the weather pattern holds nothing too extraordinary for us, with the return of sunshine, and a stretch of mild days. 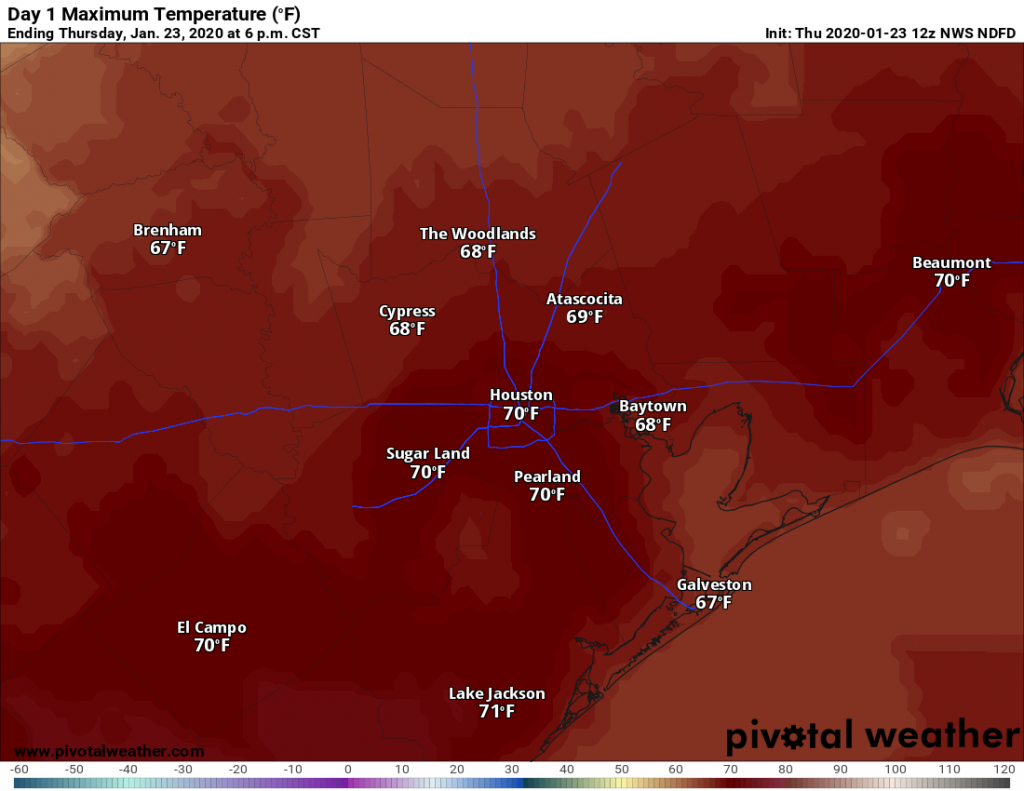 In the wake of Wednesday night’s rainfall, it is a fairly warm morning, with temperatures generally in the upper 50s to 60 degrees across the region. Partly to mostly clouds this morning will give way to sunshine, allowing temperatures to warm up to around 70 degrees this afternoon. A cool front will push through Houston around noon, and off the coast this afternoon, bringing drier air this evening. The front will subtly shift the winds from the west to the north, and temperatures tonight will be cooler, dropping into the upper 40s for most of the region under clear skies.

This should be an exceptional day, with sunny skies, light winds, and highs in the upper 60s. Overnight lows will be similar to Thursday night.

END_OF_DOCUMENT_TOKEN_TO_BE_REPLACED

The combination of increasing atmospheric moisture levels and rising air will create healthy conditions for rainfall today, and the potential for a bit of heavy rainfall later Wednesday evening and during the overnight hours. After this, a front will push through to return sunny conditions for awhile, but alas not through the entire weekend.

Light rain has begun moving into the Houston area from west to east, and a pattern of intermittent mostly light rain should hold for the daytime hours. Due to persistent cloud cover, high temperatures today will likely remain in the upper 50s. The potential for heavier rainfall will increase after sunset tonight, through about 3 or 4am CT on Thursday. Most of the region will likely see about 1 to 1.5 inches of rain, cumulatively, but there could be some areas with 2 inches or more of rainfall. We’re not expecting any real problems from this, just a soggy day and night. Lows Wednesday night won’t fall more than a degree or two most likely due to thick, insulating clouds. 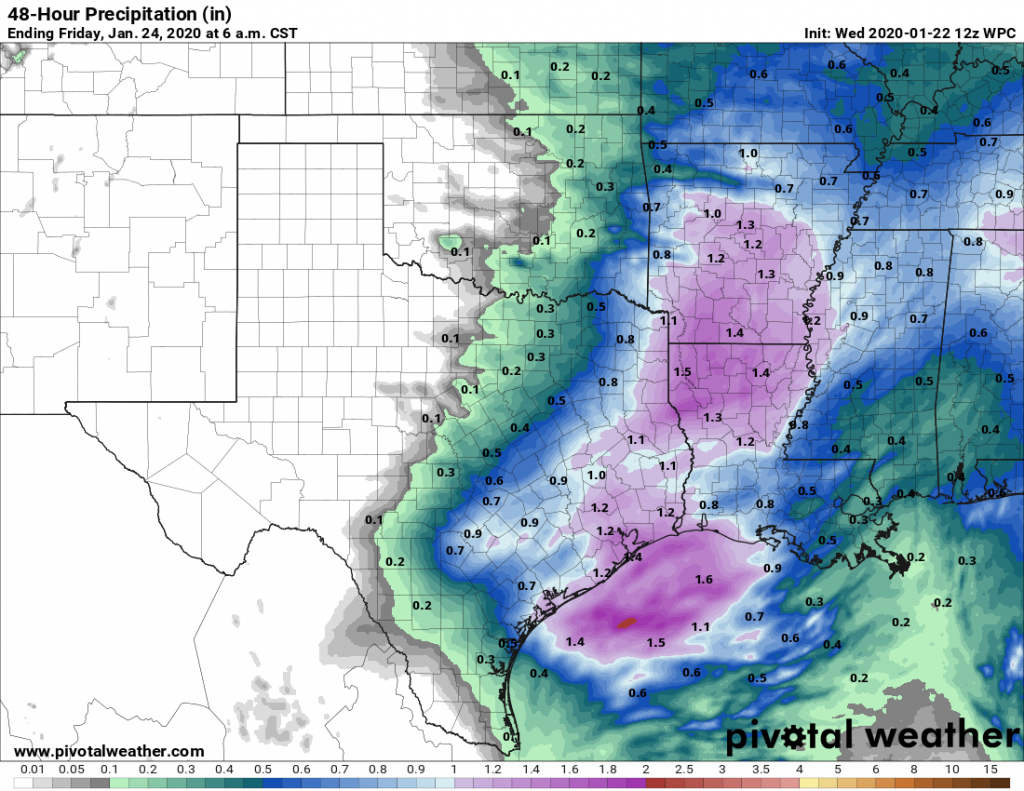 As the rains move out, sunshine will move in on Thursday morning, followed by a front reaching the area by around noon. The afternoon should be nice and sunny, with highs in the upper 60s. Low temperatures on Thursday night should fall into the 40s, under clear skies, for most of the region except for the immediate coast.