4 pm CT Tuesday update: We’re starting to get a better handle on the forecast for the rest of today, tonight, and Wednesday when it comes to the potential for heavy rainfall. The good news is that we’re reasonably confident that this mess will begin to clear out of here by Wednesday morning, if not sooner for some areas. The bad news is that we’ve got to get through later today and tonight.

Beta is now a depression, with sustained winds of 30 mph. In its 4 pm CT advisory on the system, the National Hurricane Center notes that its speed to the northeast has increased a little bit today, from about 2 mph to 5 mph. This speed should increase further over the next 24 hours. The storm’s “center” will pass across the Houston area on Wednesday, probably before noon. Its passage should be imperceptible. 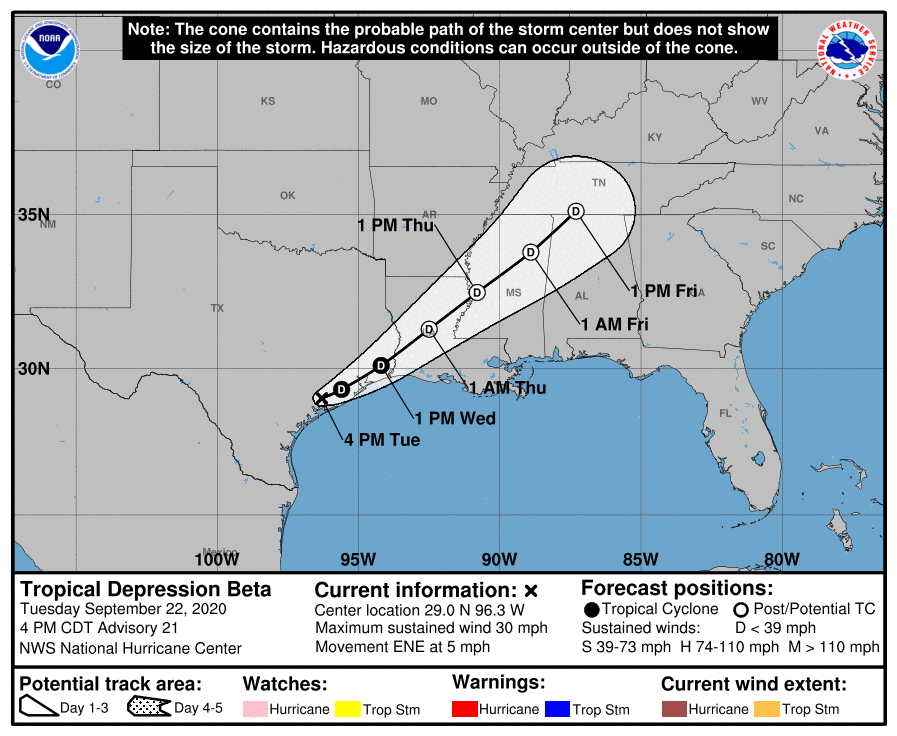 As anticipated, the radar cleared out over much—although not all—of the Houston metro area earlier this afternoon providing a reprieve for southern regions after more than a full day of rain. Aside from Clear Creek on the southern side of Houston, most bayous are within banks at this time. The Clear Creek watershed, by contrast received some of the heaviest rains and some home flooding in Pearland and Friendswood has been reported today. Based upon current levels, it looks like flooding along Clear Creek can be classified as a 10-year flood, although that will have to wait for a post-storm analysis.

As the remains of Beta move northeast, we anticipate the storm’s circulation will draw additional moisture in from the Gulf of Mexico, and form new rain bands. These will likely produce training over the region (at 4pm CT we’re seeing this from downtown Houston up Highway 290). Most model guidance suggests 2 to 6 inches of rain over these areas, but the National Weather Service has indicated a risk of some areas seeing 10 inch bullseyes.

At this time it appears the heaviest rains tonight will probably miss hard-hit areas in Fort Bend, Brazoria, and Galveston counties—they may go further north. However, it’s going to be close. For example, and take this with a grain of salt, here is a 12-hour rainfall forecast from the HRRR model showing accumulations from 4pm Tuesday through 4am Wednesday. 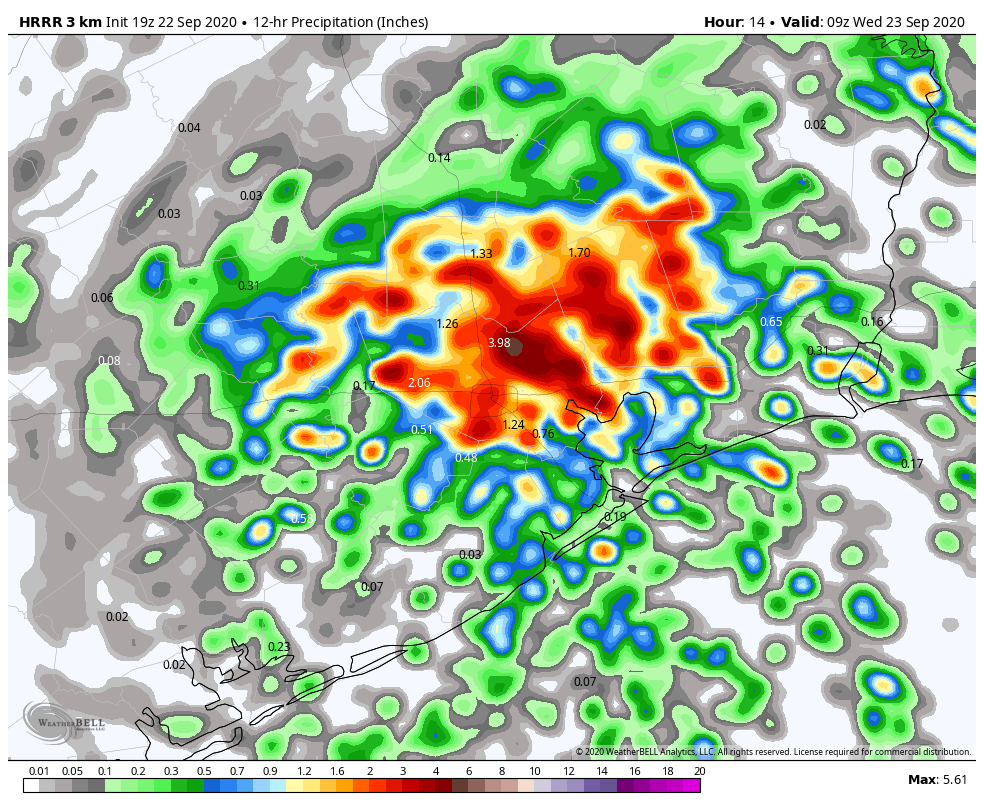 Beta is a messy storm and unpredictable, so this is just one forecast and far from gospel. Still, this model (and others) indicate the heaviest rains during the next 12 hours will probably stay north, and current radar trends support the idea that high rainfall rates will be most prominent across north, northeastern Harris County and into Liberty County.

Were such rain totals to come further south into Harris County they would pose a big risk to areas like Meyerland and Westbury, which have recorded in excess of 10 inches of rain over the last 24 hours. However, we have seen some good falls in Brays Bayou today which are continuing. So a few inches, which is our current expectation, are probably manageable, but 10 inches would be pretty bad.

As Beta continues to slog to the northeast, most model guidance shows the precipitation exiting the western half of the metro area by around midnight, or the wee hours of Wednesday morning; and exiting Harris County by around sunrise or shortly thereafter. By the middle of Wednesday morning the focus of heavier rainfall will probably shift toward the Beaumont area. So it looks like we have about 12 to 18 more hours to battle with Beta. Is anyone else sick of this storm?

Our next update will come by or before 8 pm CT Tuesday.