And so it begins. Tuesday marks the first of three days during which the Houston area will face the threat of heavy rainfall as moisture levels surge due to a tropical system moving toward us. As the system has become a little better organized overnight, it’s forecast track has also shifted subtly such that its very loosely defined “center” should now pass just to the west of Houston this week as it slowly lifts north. Here is a rough approximation of a 5-day track from the GFS model ensembles. 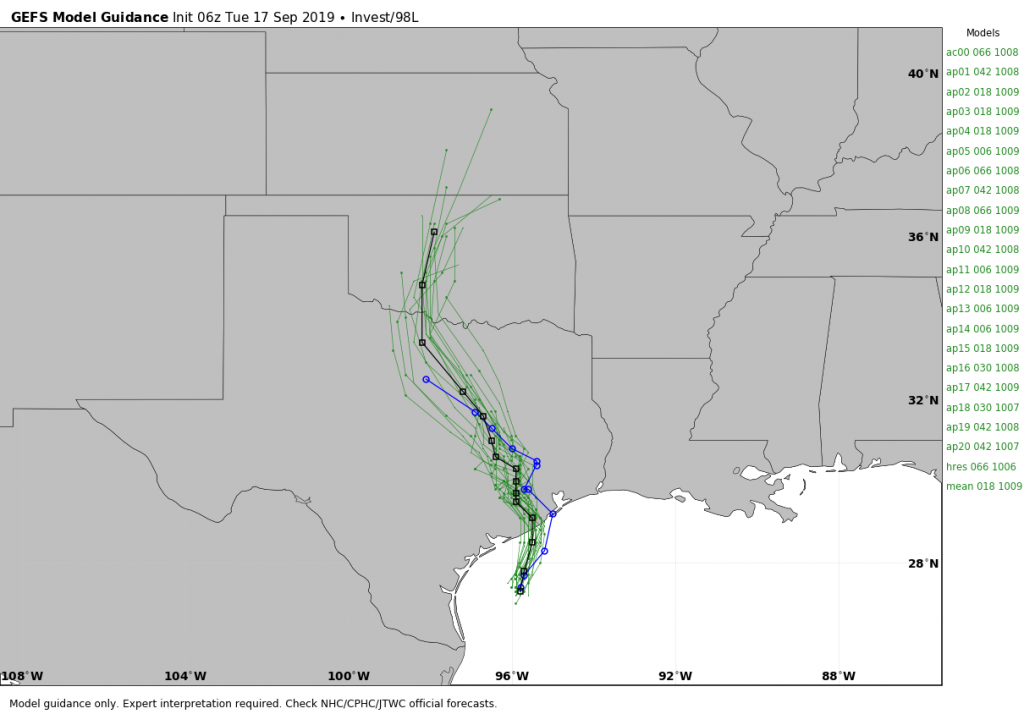 This path likely sets up the heaviest rainfall between Matagorda Bay and the Beaumont area, with Houston very much in the midst of the bullseye. Over the next three days most or all of Houston falls under the moderate chance of “excessive rainfall” according to maps published by the Weather Prediction Center—a strong indicator of where the best experts think the heaviest rain is likely to occur. 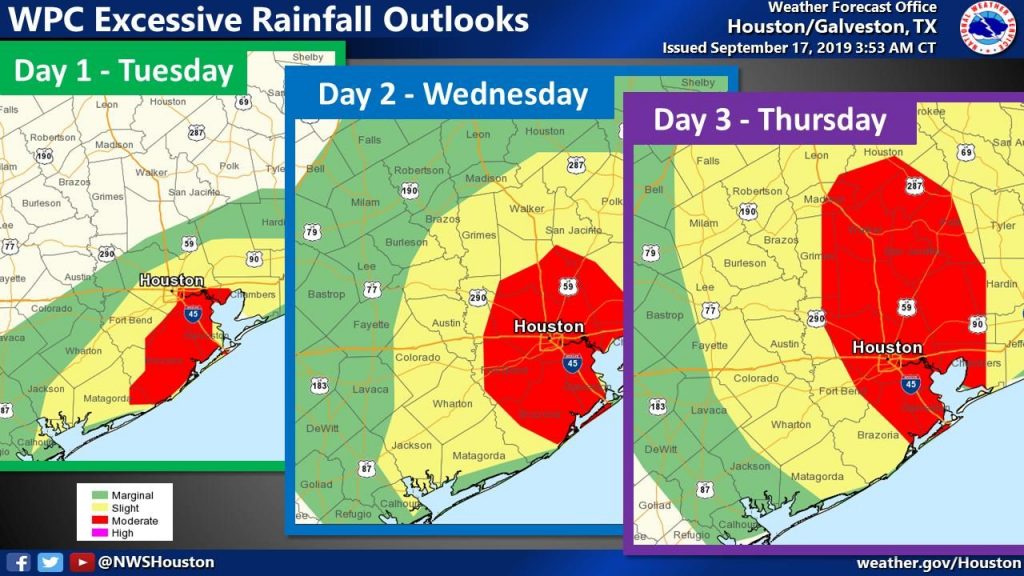 So what does this mean for Houston? It means that Tuesday will be somewhat wet, and Wednesday and Thursday have the potential to be very wet. In terms of travel and normal business, I do not think rainfall on Tuesday will be too disruptive, especially for central and northern parts of the Metro area. But there are strong signals in the models that Wednesday afternoon, night, and Thursday could be more problematic.

Where? The models have drifted a little bit eastward with this heaviest rainfall during the overnight hours—if this trend continues the heaviest rains could come down just east of Houston. But it is far too hard to parse such details at this point, and frankly there is a lot of moisture coming into Texas so everyone is going to get rain. I think widespread totals of 5 to 10 inches are likely for most people over the next three days. Some areas probably will see 10 to 15 inches of rain. This is manageable for most if it is spread over two to three days. But 15 inches in five hours would not be. Unfortunately, as we know, tropical rain often comes in clumps. The system has a shot at becoming a tropical depression or storm before landfall tonight—30 percent per the National Hurricane Center—but that doesn’t really matter. It is going to be a rainmaker regardless.

We are forecasting a Stage 2 flood event for Houston this week.

If there’s any good news, it’s that this event seems likely to come to an end by Friday morning or so, by which time we can begin to dry out. Chances are also decent that we may finally see the season’s first front by the end of the month, although we’re not close to being able to be definitive about that.

28 thoughts on “Heavy rains beginning to fall over Houston, will continue through Thursday”