Houston saw more scattered rather than widespread showers on Monday, and that pattern should more or less hold for most of this week as Houston lies beyond the edge of a high pressure system. This will allow for some areas to see downpours today, and others just sunshine, nearby clouds, and humidity.

Houston will see partly sunny skies today, with highs in the lower 90s. We can expect showers to develop offshore and move inland throughout the day, although again, coverage should be more scattered rather than widespread. Where storms set up, people may see up to about one-half inch of rain fairly quickly, but the storms should move off pretty quickly.

Conditions for rainfall become slightly less favorable during the middle of the week, as we may see some capping of the atmosphere. I’d peg rain chances at 20 to 30 percent both of these days, with mostly sunny skies and high temperatures in the low- to mid-90s. 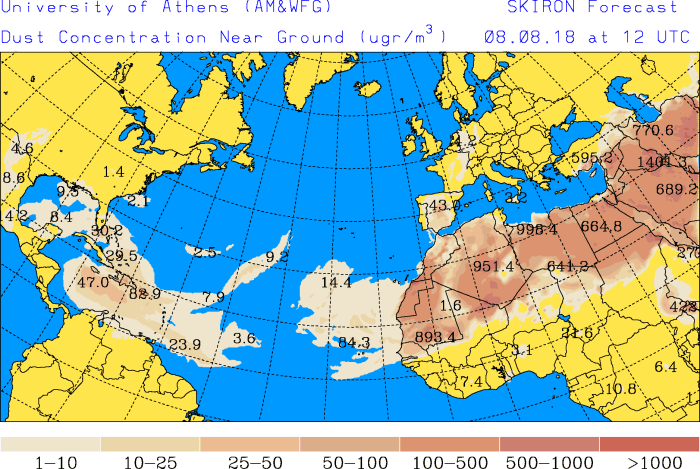 The SKIRON model shows dust backing away from the Texas coast this week. (University of Athens)

We continue to get a lot of questions about African dust. Some of the latest computer models suggest the dust will remain mostly at bay from the central and upper Texas coasts this week—although the dust will remain in place over the Gulf of Mexico—so that shouldn’t be something we have to worry about too much in terms of allergies.

I wrote yesterday that I’d hoped we find some answers on weather conditions for this weekend, but I’m afraid there remains a fair bit of uncertainty. The forecast models just don’t really agree, at all, about how far a cold front will penetrate into northern Texas, and this leads to uncertainty in the downstream effects for greater Houston. The best bet, for now, is probably partly sunny days, with highs in the low 90s, and a healthy chance (~50 percent) of showers during the day time. Again, we’ll try to refine the forecast as we get closer to the weekend. 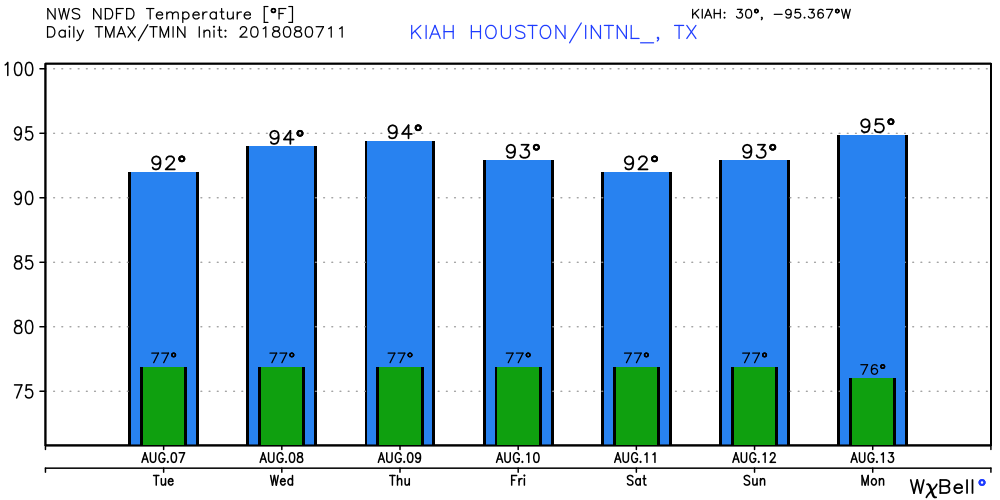 Temperature forecast for the next seven days. (Weather Bell)

Right now I don’t see any signs of high pressure building over Houston early next week, so we’ll go with a persistence forecast of highs in the low- to mid-90s with a modest chance of afternoon showers. It’s safe to say confidence is fairly low.

9 thoughts on “Houston to remain in wetter, summertime pattern this week”