Good morning, and welcome to a new week. Before we get into our daily forecast—and it’s going to be fairly warm and humid until at least the weekend—I wanted to offer a quick look at the forecast for our upcoming winter.

We are now reasonably confident that La Niña conditions will persist in the equatorial Pacific Ocean this winter, and that typically leads to a fairly consistent pattern for the United States. Specifically for Texas, it tends to yield more mild winters with less precipitation. NOAA’s updated, official outlooks for winter conditions—defined here as the months of December, January, and February—were just released. And they reflect this La Niña-like pattern. Here’s the temperature outlook:

Expect above normal temperatures in Texas this winter. (NOAA)

And below you will find the corresponding outlook for precipitation. Will this include snow? The likelihood of warmer temperatures lowers the probability of this, but there is always the old wives’ tale that says Houston will see snow during the winter following a tropical system landfall. So we’re not ruling it out.

Expect a dry winter in Texas, too. (NOAA)

Now, let’s jump into the forecast for the week ahead.

A cold front is pushing through Texas this morning, but it should stall out around College Station, and will not bring any cooler or drier air into Houston. However, the front will help engender some scattered showers over the region today—ultimately probably about 30 percent of the area will see rain. Under mostly cloudy skies, we can expect highs to reach into the mid-80s, with lows unlikely to fall below 70 for all but areas far north and west. Winds will be light, out of the south.

The region will be largely stuck in the same pattern for much of the work week, with partly to mostly sunny skies, highs in the mid-80s or so, and plenty of humidity. Nighttime temperatures will probably again not drop below 70 degrees. Rain chances will not exactly be zero, but they’re on the order of 10 to 20 percent for most days.

Our weather this weekend will be determined by whether a weakening cool front makes it all the way through Houston later on Friday or Saturday. The overall pattern is not fully supportive of the this front diving southward, and off the coast, but it seems possible. If there’s no front, expect more of the same. If the front does make it, expect a pleasant, slightly cooler weekend with drier air. Rain chances seem modest either way. 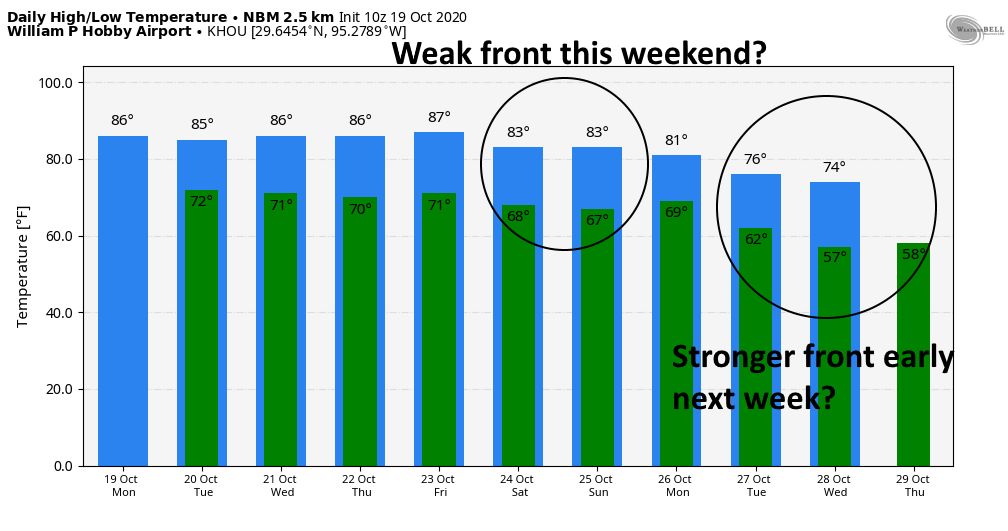 The forecast models are hinting at a stronger front coming through by next Monday or Tuesday, and there does seem to be more support for this one’s passage. If the front verifies, we could see lows in the 40s for areas well inland, and 50s in Houston next week. But let’s see a few more days of data before we fully buy into this one.

6 thoughts on “Looking ahead to Houston’s winter: Likely drier, warmer than normal”