We begin with the November 21, 1992 Southeast Texas tornado outbreak.

November 1992 represents the benchmark tornado outbreak for Greater Houston. Six tornadoes were confirmed in the Houston area that day, including an F-4 rated tornado in Channelview. Several other tornadoes spun up elsewhere across Southeastern Texas, for a total of 14 in the state. At one time, three tornadoes were on the ground simultaneously in Harris County. Miraculously, no one was killed, but over 30 people were injured. The twisters caused more than $150 million in insured damage (in 2015 dollars). Roughly 2,400 homes were damaged, with another 450 destroyed. These tornadoes marked the beginning of a much larger tornado outbreak that ended up taking 26 lives across the Southeastern United States and causing at least $500 million in damage (in 2015 dollars) nationally.

Some of the pictures from this event are incredible for this area. The absence of any fatalities in Texas is a testament to good fortune, and really outstanding warnings and analysis produced by the NWS Houston. In fact, at that time, the Doppler radars we currently use (and can’t imagine living without) were literally brand new, and Houston was fortunate to have one installed (fast forward to 2:48 in the video below).

We’ll talk more about the impacts and results in a bit. First, let’s tackle the meteorology behind the storms.

Meteorological Setup for an Outbreak

Let’s start with the big picture. From the morning weather map that Saturday, we can see a surface low pressure system in the Great Lakes with a trailing cold front that was stationary over East Texas and connected back west to another surface low in West Texas.

When we look at the reanalysis maps from that morning (shown below), there clearly was a very strong storm system at the 500mb level (about 20,000 feet above us) in West Texas. This was fueling strong southwesterly winds aloft over Southeast Texas that morning.

That Saturday morning started out cloudy, mild, and humid. Temperatures rose in the morning from the 50s into the 60s and the humidity was high. Dewpoints skyrocketed at Hobby Airport from the mid 50s at 7 AM to 70° by 10 AM, indicating a surge in Gulf moisture over the area. This would help fuel severe thunderstorms. Additionally, winds that morning were from the east. This was important. When you look at what we call a “sounding,” or a graph of temperature a dewpoint by height as recorded during weather balloon launches each morning, you see a serious problem.

The Houston office of the National Weather Service recognized this danger, and issued a special weather statement that morning highlighting the possibility of tornadoes later in the day: 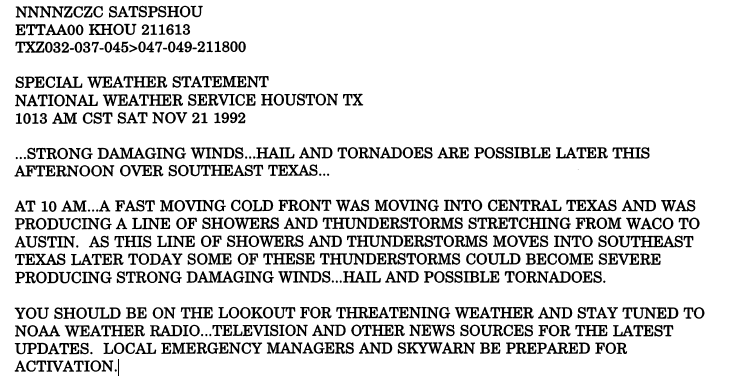 As the forecasters looked deeper into the available data, they saw absolutely incredible wind shear in the Houston area. Additionally, clockwise turning of wind as you go up in the atmosphere indicates that storms can rotate without a lot of effort. As Tim Marshall, a leading storm chaser, engineer, and storm damage expert, also noted, the speed of wind increasing substantially as you go up in the atmosphere (speed shear) helped to sustain the storms and allow the tornadoes to be quite visible. Another look at the wind profile from the Houston radar that afternoon also illustrates this well. 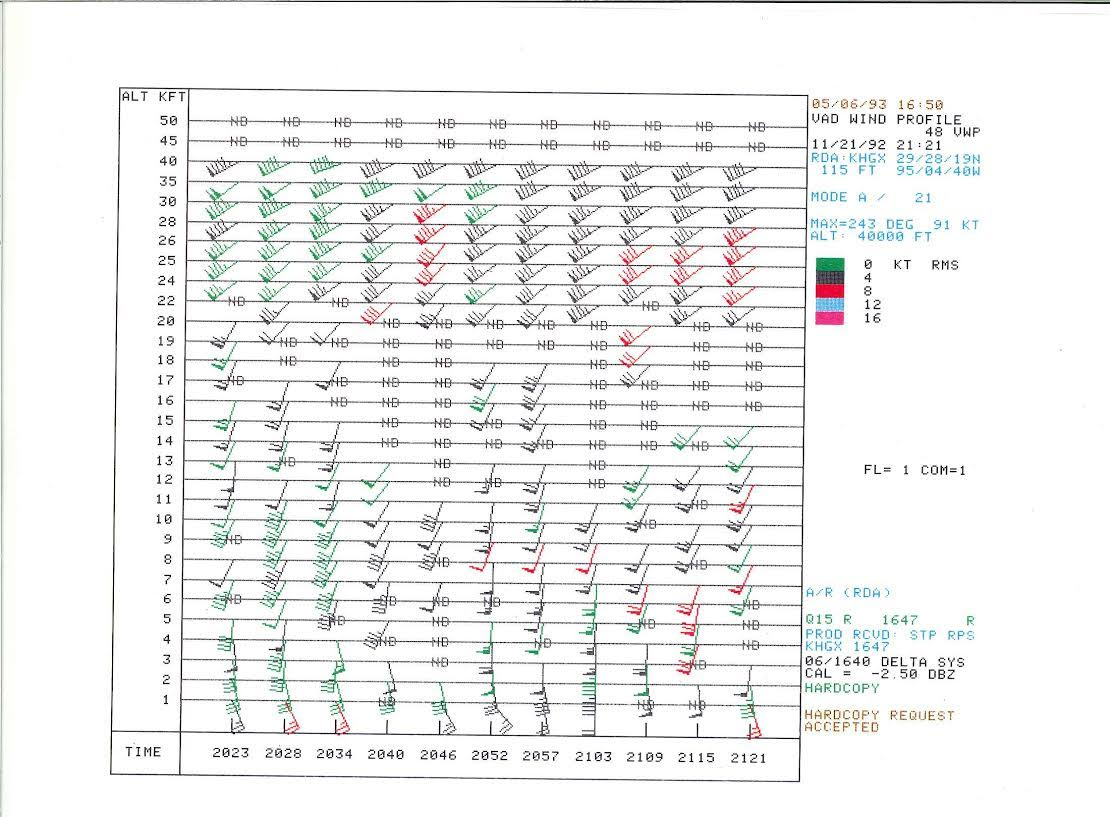 The hodograph that morning from Lake Charles also looked fairly classic for a tornado day.

The summary here is simple: Weather maps and parameters that morning screamed tornado potential. By midday, the upper level storm had carved its way into Central Texas, helping to lock in the parameters of the morning and allowing the spark necessary to trigger the tornado producing thunderstorms that afternoon.