Houston’s temperature hit 100 degrees for the first time in a year on Sunday, reaching 100 exactly at Bush Intercontinental Airport. However, of more note have been the “low” temperatures overnight, which on the last four nights have only fallen to 80 degrees. This has set or tied a “high minimum temperature” record for each of the last four days. This only adds additional stress to the region’s ecosystem—not to mention people who live without air conditioning—on top of the already high daytime temperatures. Fortunately we only have one more extremely hot day before the heat breaks slightly. 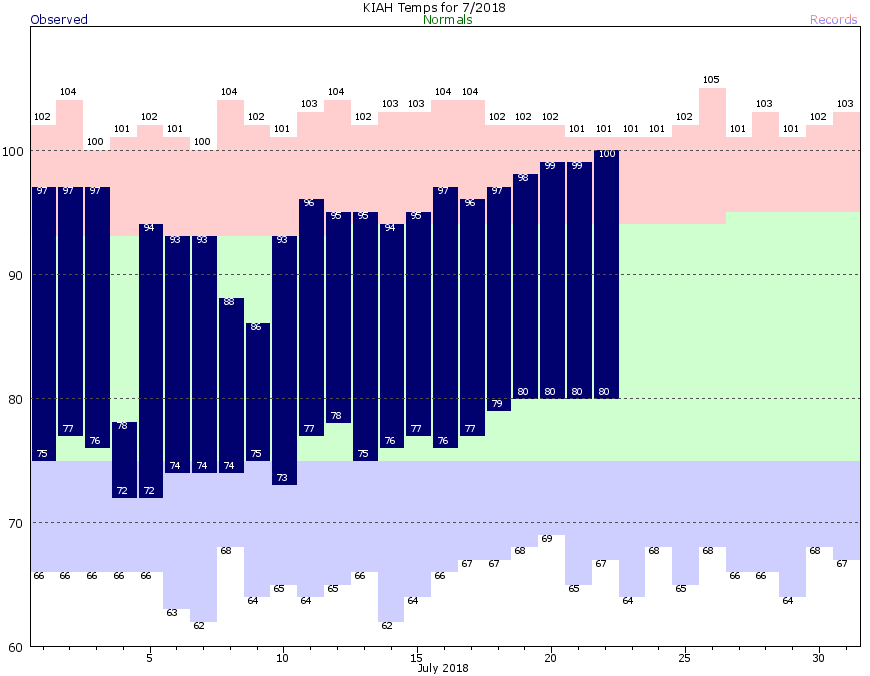 A heat advisory remains in effect for today, until 9pm, as high pressure will lead again to mostly sunny skies and high temperatures of about 100 degrees across the region. By now, you know the drill, as today will be a lot like Saturday and Sunday. Areas to the northwest of Houston, including the Bryan-College Station region, are under an “excessive heat warning” because high temperatures could reach into 105-degree range for some areas.

Don’t get too excited, but a “front” will slowly move southward from northern Texas and Louisiana on Tuesday. During July these aren’t cold fronts, per se, but more of just a differentiated air mass. In this case, the air is slightly cooler, and more moist. The net effect of this should be to knock daytime temperatures on Tuesday back into the mid-90s, as well as the bring a 20 to 30 percent chance of rain to the area. What I think will happen is that while most people won’t see rain, a few parts of the region could see some pretty heavy thunderstorms during the afternoon hours. 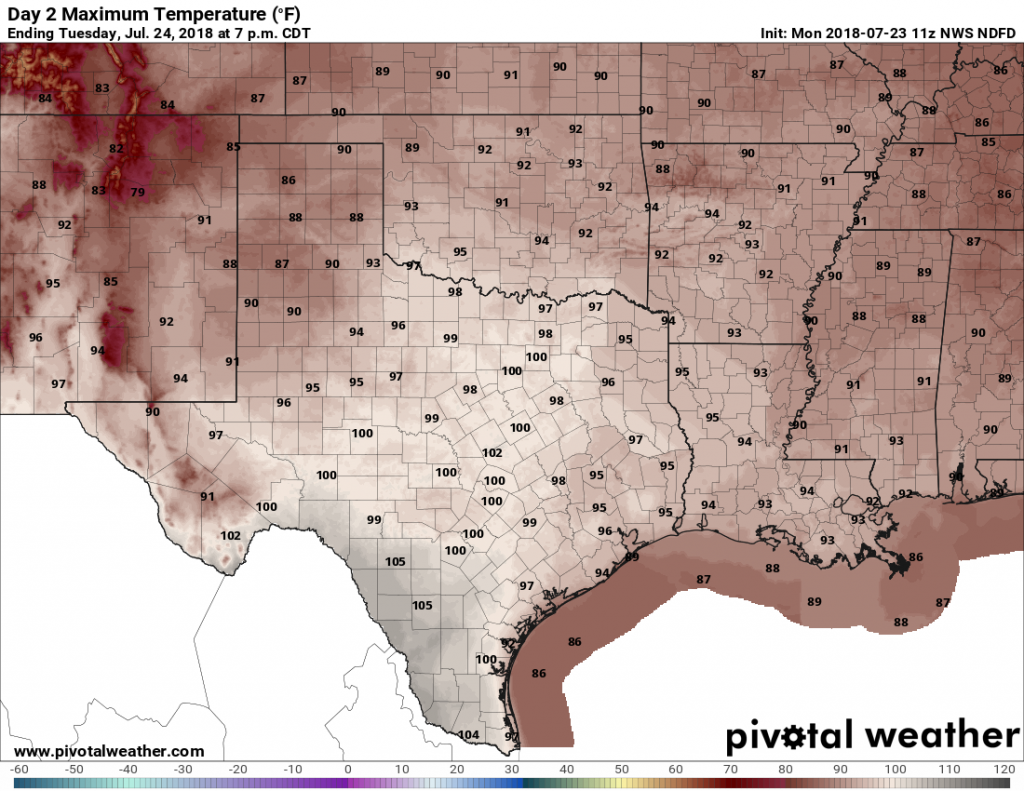 High temperatures should be cooler on Tuesday in west and east Texas. (Pivotal Weather)

The effects of the front won’t last long. The middle part of the week will be hot and mostly sunny, with highs probably in the upper 90s. Low temperatures in the upper 70s.

The weekend and beyond

Some slight rain chances will probably return by Friday, but we’re still talking about isolated to scattered showers that kick up during the afternoon hours with daytime heating. For the most part, we can probably just expect a warm weekend with highs in the mid-90s.

Next week could see something of a pattern change, as forecast models show better rain chances beginning Monday or Tuesday, and high temperatures falling back into the low 90s. At this point, as we get into August, that sounds pretty great. But alas, there are no guarantees at this point.

In light of the ongoing heat wave, Reliant has asked me to share this important information with our readers.

With extremely hot weather across the state and a record demand for electricity, the Electric Reliability Council of Texas has broken multiple peak demand records this week.

As temperatures continue to reach triple digits, we all will be tempted to crank up our air conditioners. A home’s air conditioning system typically accounts for 60 percent of electricity use. So, when it’s hot outside, your AC works harder and uses more energy than normal to keep your home comfortable.

Now more than ever, in our homes and businesses across Texas, we must work together to conserve energy. This is especially important during peak-demand hours (2 to 7 p.m.).

Two of the easiest ways we can do our part to help relieve stress on the electricity grid is by increasing your temperature a few degrees and avoiding heat-generating activities, like using the oven, dishwasher or dyer, during the 2-7 p.m. high-demand period.

If you’re a Reliant customer, you can track your electricity usage alongside daily temperatures with the Reliant app for iPhone or Android (you can also find Space City Weather linked there). Plus, you can set personalized alerts for electricity usage, bill estimates and more. It’s a great tool to have as we all try to conserve energy and beat the heat this summer. For more tips, visit here.