After a splendid weekend, Houston’s weather turns a little more unsettled this week, with a weak front, and on-and-off rain chances.

A warm front moving inland from the Gulf today should drive fairly widespread showers throughout the day. Rain with a few embedded thunderstorms will be more likely near the coast this morning, and spread further inland later this morning and during the afternoon hours. Overall, accumulations for most people will likely be a few tenths of an inch of rain, with perhaps one-half to two-thirds of the area seeing at least some brief showers. Highs will be in the mid-80s with mostly cloudy skies. Lows will only fall in the mid-70s.

This will be a hot day, with highs likely reaching 90 degrees in some locations under partly sunny skies. Rain chances will drop back to about 30 percent for Houston. 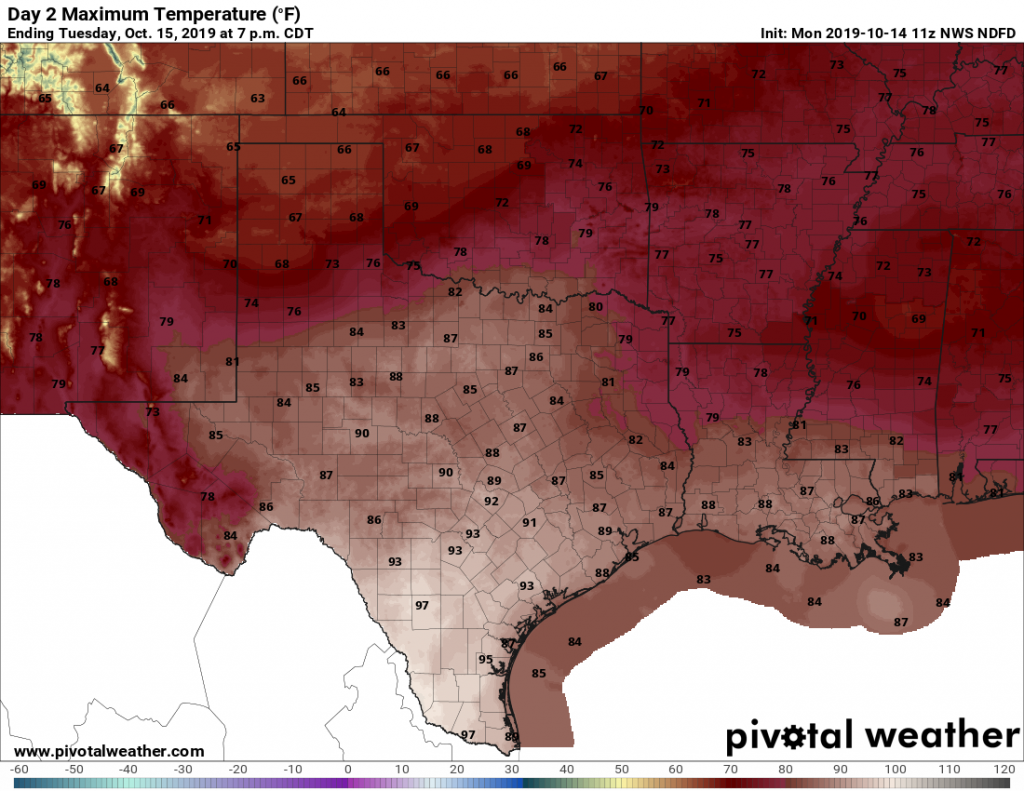 Tuesday will be a hot day for Houston. (Pivotal Weather)

At some point on Wednesday, likely during the morning hours, a cold front will push through the area and off the coast. Some storms are likely to accompany this front, although they may weaken as they approach Houston. In any case, after the rain, Wednesday will be cloudy and cooler, with highs in the mid-70s.

This, certainly, will be the pick of the litter for this week. Morning lows will probably reach the upper 50s for inland areas. Highs likely will climb into the mid-70s under mostly sunny skies. This front won’t last long, but it should deliver one great day of weather.

Partly sunny, and warmer, as the front washes out. Some slight rain chances.

At one point it looked like this weekend would be fairly wet, as tropical moisture surged into the region from the Gulf of Mexico. Now it appears increasingly likely—but not certain, by any means—that the bulk of this moisture will get pushed east toward Louisiana. So if you’re planning on spending some time outdoors at an event like Wings over Houston this weekend, conditions right now appear decent, if not even good. Saturday, especially, should have partly to mostly sunny skies with rain chances of only 20 to 30 percent. Sunday has a better chance for more rain, but it appears to be by no means a washout. Both days will be warm with highs in the mid- to upper-80s. We should have more confidence in the weekend forecast in a couple of days.

Confidence is fairly high in a stronger cold front arriving next Monday or Tuesday, which should usher in several days of considerably cooler weather, with highs in the 70s.

8 thoughts on “Slightly unsettled weather returns to Houston this week”