A somewhat wet weekend has come and gone in Houston. Parts of the city, such as the area between Memorial City and Katy, received almost no rain, whereas separate locations near Alvin and Bush Intercontinental Airport received up to 3 inches. The sunshine on Sunday afternoon felt pretty nice.

For this week, we can expect some more wet weather—although frankly, the scattered reports I’ve seen of a “tropical wave” or other language to suggest a serious flooding threat is headed this way are significantly overstated—before drying conditions later in the week. See below for a full outlook for the July 4th holiday.

Conditions today should be fairly mild for the first day of July, with highs of around 90 degrees and partly to mostly sunny skies. With daytime heating we may see some isolated showers and thunderstorms pop up later this afternoon, but coverage probably will only be in the 10 to 20 percent range. Lows tonight should get into the mid-70s. 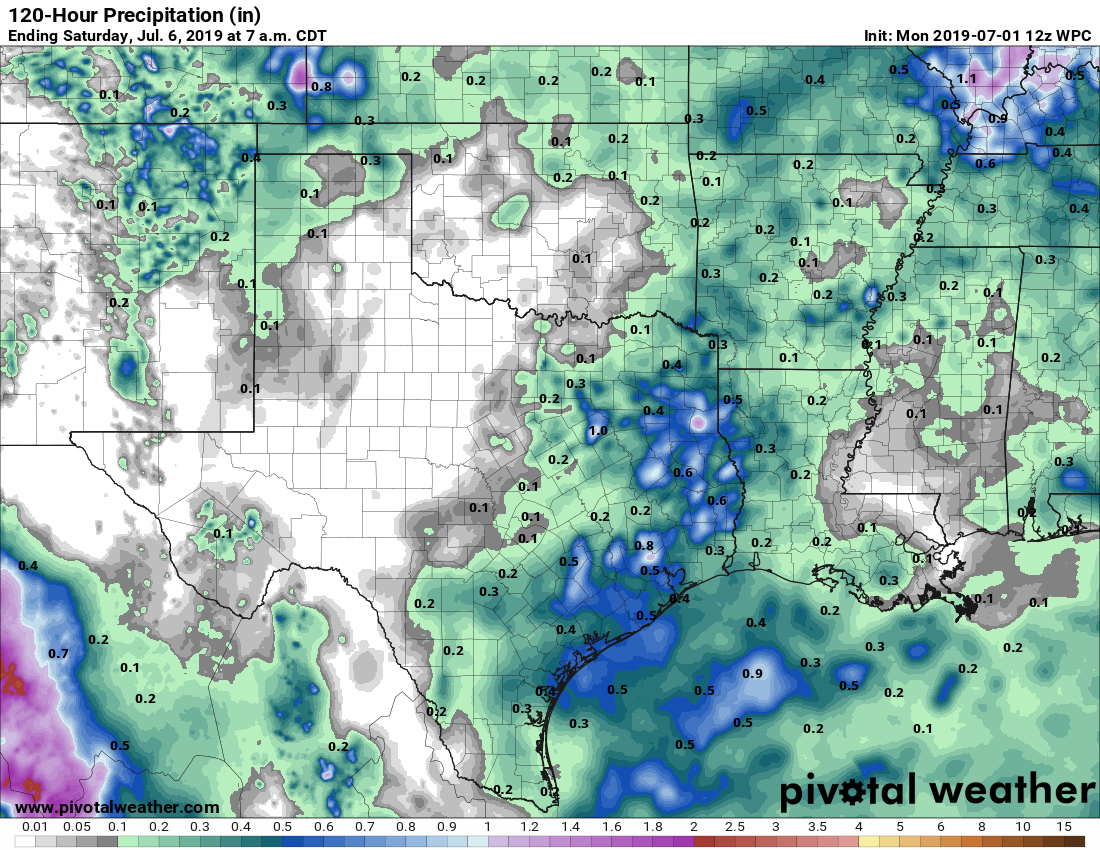 The region will fall under the influence of a more moist air mass from the Gulf of Mexico, and this will lead to increased rain chances for Tuesday, Tuesday night, and most of the day Wednesday. Right now there doesn’t appear to be too much to drive organization of these storms, and models indicate most of the area will see 0.25 to 1.0 inch of rain, with a few bullseyes of heavier rain where 1 to 3 inches may fall fairly quickly given the tropical nature of the moisture. These will be partly to mostly cloudy days, and the intermittent rain showers should limit highs to the upper 80s for most areas.

This should be a mostly sunny day. We can’t entirely rule out a few stray showers, but they should be fairly fleeting. Despite the sunshine, temperatures will still be fairly manageable for the holiday, with highs likely only reaching the lower 90s. Temperatures shortly after sunset, around the time July 4th fireworks begin, should be in the mid- to upper-80s with partly to mostly clear skies. Given the range of weather conditions possible in early July, in Houston, this is a pretty darn good forecast. The only real concerns I can see at this point are humidity and mosquitoes, especially after our recent run of wet weather. Prepare accordingly.

We have no real concerns about next weekend’s weather, either. For now, we anticipate mostly sunny days, with highs in the low 90s, and rain chances near zero due to the influence of high pressure. Rain chances look to remain fairly low through at least the first half of next week.

Warmer ahead for Houston, but not ultra-hot. (Weather Bell)

As we get into the heart of summer in Houston—early July through early September—Reliant wanted to remind readers about the need for energy efficiency (and some benefits for taking such action) as the heat descends upon the region:

2 thoughts on “Some rain before warmer, sunnier weather for the Fourth of July”