One might very well be asking that question about the winter we just experienced in Houston, when we had precisely two official freezes as the mercury dropped to 32 degrees on Jan. 11th and the 28th. And this was supposed to be a colder winter. During an El Niño winter, and this was an especially strong El Niño, typically the greater Houston region sees slightly cooler and somewhat more wetter conditions than normal.

The most noticeable thing about this winter has definitely been the temperature. We just haven’t had that many cold nights. And it’s not that we’ve seen exceptionally warm temperatures (for example, none of the months from November through February ranked among the top 10 warmest in Houston), we’ve just been consistently warmer than normal.

The effect of this has been that Houston and Texas, like much of the rest of the United States, has been quite a bit warmer than normal. Overall, Texas had its 114th warmest December-February period out of 121 years, according to NOAA data.

I’ll have more in a minute on this.

If we look at the last three months of rainfall data it seems much of Houston has had near-normal precipitation. 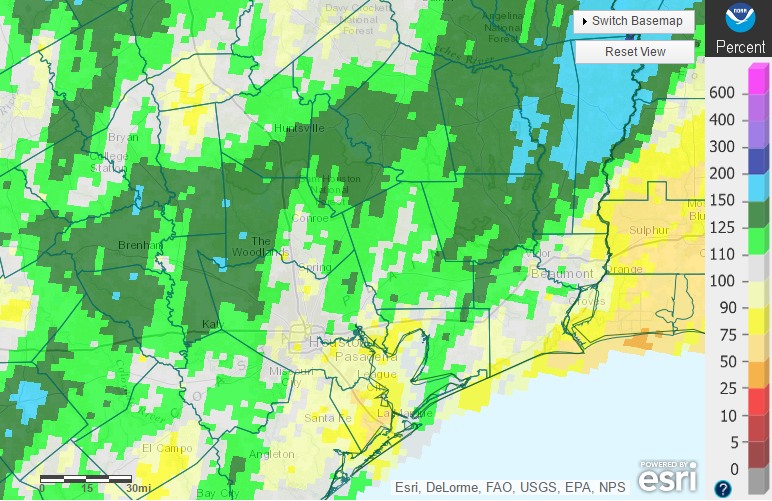 “Percent of normal” rain from mid-December through mid-March. (NOAA)

We were obviously helped by heavy rains in early March to get to this point. But the bottom line is that while we were below normal in January and February, we weren’t excessively so. And if you take a broader view, this has been a wet winter.

“The shorter the averaging time, the more the randomness of the weather plays a role. If you count from the beginning of October, this has been a very wet winter, and even December through February hasn’t been all that dry in Houston,” John Nielsen-Gammon, the state climatologist, told me. And he’s right. Here’s a look at “percent of normal” rainfall for the region since October 1: 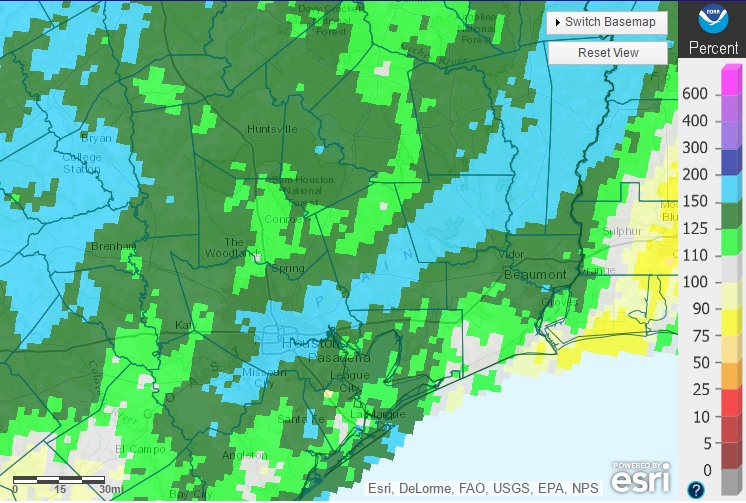 “Percent of normal” rainfall the Houston area has received since Oct. 1, 2015. (NOAA)

That big swath of blue running through the center of Harris County represents 150 to 200 percent of normal rainfall, so some areas got nearly twice as much as would be expected during the last 5.5 months.

From this we can conclude that the Houston region had a more or less consistent rainfall pattern with an El Niño, but the temperature remains a real abnormality. “Experts were split on whether this winter would actually end up colder than normal, but nobody was expecting something as warm as what eastern Texas has experienced so far,” Nielsen-Gammon said. “Offhand, there doesn’t seem to be anything unusual in the way the large-scale atmosphere is responding to this El Niño. The average jet stream pattern for October through January was very consistent with what is typical during a moderate to strong El Niño year.”

Sometimes weather is not predictable. Additionally, with climate change, we might expect to see warmer winters even when a pattern such as El Niño has historically brought us cooler weather. In any case, Houston experienced a truly warm winter.

What does this mean for summer? I am leery of putting too much stock in seasonal forecasts, but right now there are fairly strong indications of warmer than normal conditions across Texas this summer. And let’s face it, Houston had back-to-back somewhat “mild” summers in 2014 and 2015. (Remember that August high of just 82 degrees on a sunny day in 2014?) I don’t think we’re going to get that lucky again in 2016. I cannot predict precipitation with any confidence, that is too dependent on weather from the Gulf. But temperatures? Perhaps an air conditioning company would care to sponsor this weather site.