Temperatures are generally in the 40s or 50s this morning across Houston, but that’s probably the end of the cool weather until next weekend. A warm front will move onshore today, and will leave us with warm and muggy conditions for most of the rest of the week. Rainfall will never be too far away, but accumulations probably won’t be that significant, likely less than one inch.

Light showers along the coast should migrate inland along with the warm airmass moving in from the coast. After the rain moves through, we’ll be left with a mostly cloudy day, with high temperatures in the mid- to upper-60s. With a thick cloud deck Houston is unlikely to see much of a change in overnight temperatures. Lows tonight will probably only fall 3 to 5 degrees from high temperatures on Monday.

With the warm, moist air the region will likely see the development of sea fog along the coast as warm air moves over the cooler near-shore waters of the Gulf of Mexico and Galveston Bay. Highs Tuesday will reach the mid-70s. More rain showers will be possible on Tuesday, although at this point they likely will be more scattered than any activity on Monday. Lows Tuesday night are unlikely to fall much below the upper 60s. 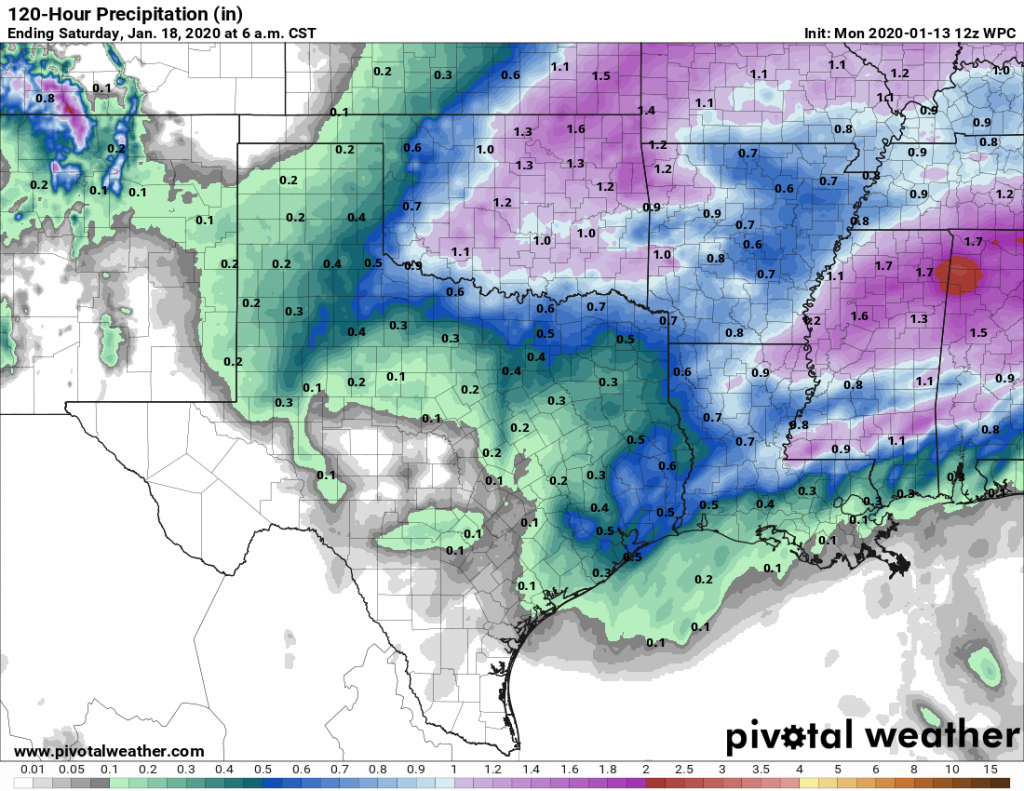 Overall rainfall accumulations this week should be modest. (Pivotal Weather)

These will be two more gray days, with highs in the upper 70s and warm nights. Rain chances will likely take a step back to the 20 to 30 percent range. The bigger question is whether a cold front makes it all the way down through Texas and into Houston on Thursday. The answer at this point seems to be very likely not, although if you live in Montgomery County or points north there’s a slightly better chance of seeing some cooler and drier air on Thursday and Friday.

This is the day a bonafide cold front should arrive in Houston. It is not certain, but the front will likely move into Houston some time during the daytime or evening hours. Depending on the front’s timing, highs will probably reach the low 70s under continued, mostly cloudy skies. As of now, the front does not appear likely to bring a line of storms through with it. Temperatures Saturday night will depend on the timing of the front, but likely will get down into the 40s or 50s.

So what does the day of the Houston Marathon hold? I will start by saying the weather is not locked in, as we still have questions about the timing and intensity of the cold front, which will have definite impacts on conditions from 7am to Noon on Sunday. For example, the majority of the European model ensemble members have lows on Sunday morning in the range of 50 to 55 degrees, whereas the GFS model is consistently in the 40 to 45 degree range. That’s quite a broad spread. Forced to pick, I’d still bet that 50 degrees is probably a good estimate for a start-line temperature. 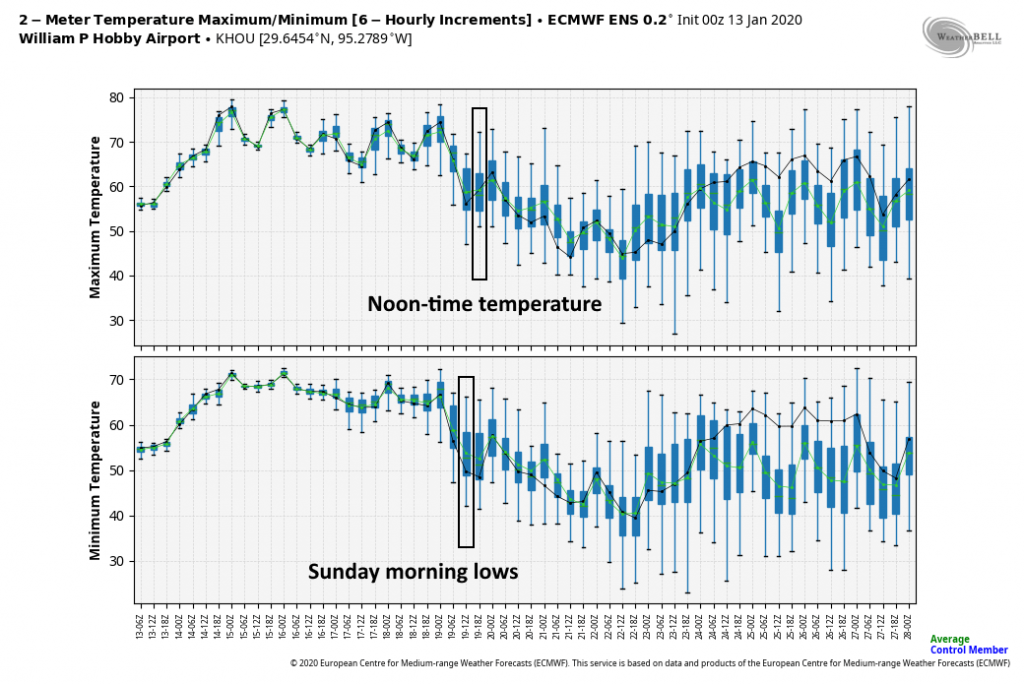 About half of the European members have skies clearing out on Sunday morning, while the other half are cloudy, and a few even have some lingering showers. The bottom line is that until we feel confident about the timing of the front, it’s hard to pinpoint conditions. However, we feel pretty good that some kind of airmass will arrive to end the warm and humid conditions we’ll experience for most of the coming week.

If you’re missing winter, right now it looks like a reinforcing front may arrive on Monday or Tuesday of next week leading to some cold nights in the 40s and possibly 30s.

14 thoughts on “Three words to describe this week: cloudy, humid, and foggy”