2pm CT Saturday: Tropical Storm Beta made its expected turn west earlier today and is now crawling toward the Texas coast at 2 mph, according to the National Hurricane Center. Its maximum sustained winds are 60 mph. Our overall forecast for the Houston metro area has not changed at this time: We still anticipate Stage 2 flood conditions south of Interstate 10, and Stage 1 for areas north of Interstate 10. Bottom line: We have not seen anything today that makes us any more concerned.

I want to start with a satellite image of the Gulf of Mexico this afternoon that illustrates water vapor—a good proxy for convection. When you look at this image there are a couple of important things to notice. One, the precipitation associated with Beta is strongest near its core and well to its east. Second, the reddish hues across Texas indicate dry air. Some of this dry air is wrapping into the circulation of Beta, which is helping to hamper its intensification. Finally, it’s clear that until Beta moves further west the bulk of its precipitation is going to fall over the Gulf, or southern Louisiana. 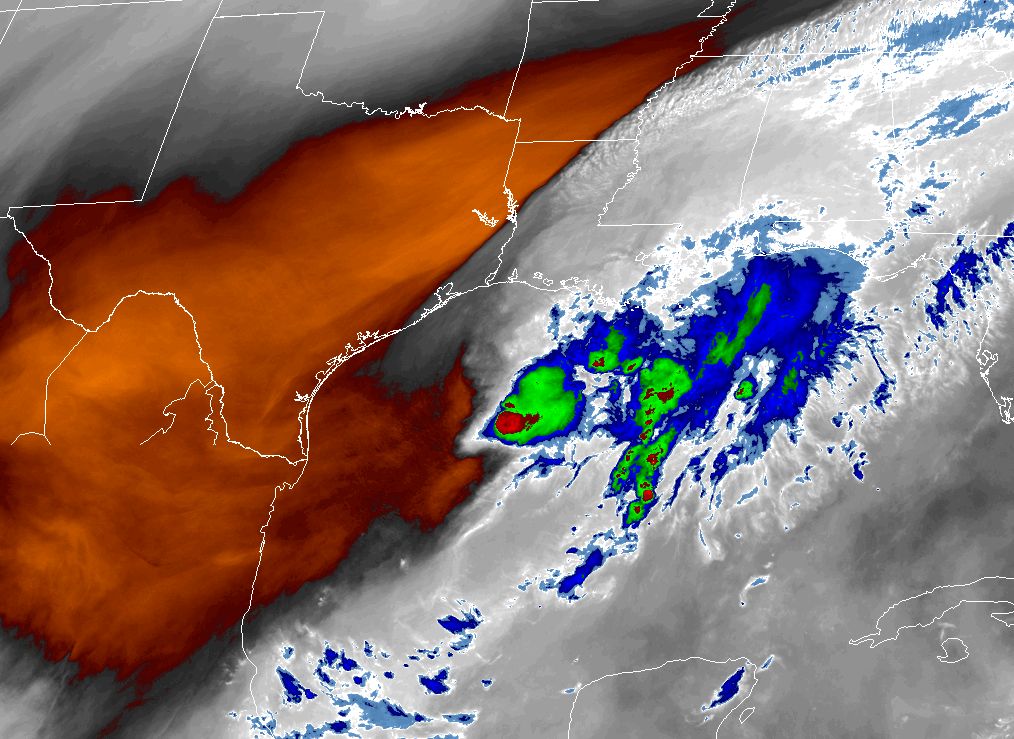 In this afternoon post I want to discuss the timing of what to expect after today, and when. The usual caveats apply, this is a dynamic weather system, so forecasts will change. But this is our best guess as of 1:30pm Saturday afternoon.

Beginning fairly early on Sunday we could see some outer rain bands from Beta moving into the Texas coast. Most likely these will be light to moderate, at least during the daytime hours. Coastal areas may see upwards of 1 to 2 inches of rain, but inland areas will likely see less. All in all, this should not be too disruptive. Coastal areas may see tides 3 to 4 feet above high tide levels, particularly on Sunday evening, and Monday morning. Tropical Storm force winds may arrive along the coast, from Matagorda Bay to Galveston by Sunday evening or during the overnight hours.

Most of the best available model guidance suggests we will see similar conditions on Monday as the storm’s center nears the Texas coastline, probably near Matagorda Bay. I should note that overall confidence in this track remains somewhat low, and that a northward jog in the track would bring more serious winds and surge into Galveston Bay. However, we don’t expect that right now. Beta will likely will be a high-end tropical storm or a low-end Category 1 hurricane at this time. Winds will probably increase across the Houston area, although I’m not sure they will reach Tropical Storm-force. 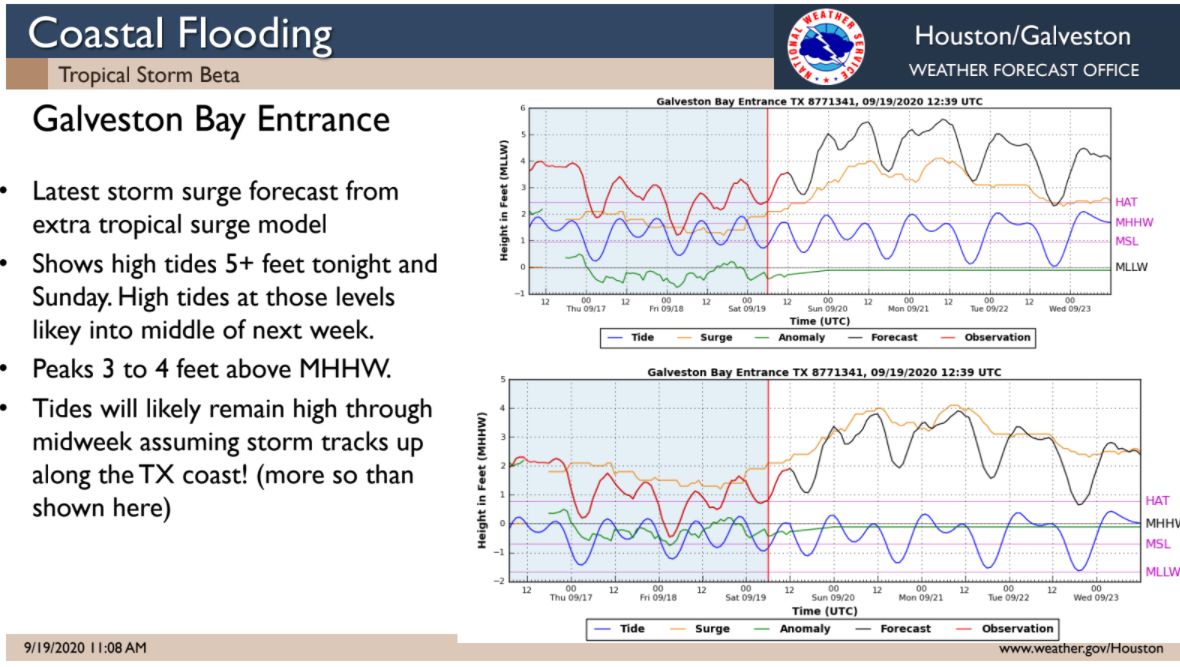 These are the days when we can probably expect the heaviest rainfall, although amounts are still to be determined. This is the period when we expect Beta (or the remains of Beta) to begin lifting to the north and then northeast, perhaps bringing its circulation near the Houston metro area. By Thursday we should see improving conditions across Texas.

So really, how much rain?

If you remember the satellite image at the top of this post, almost all of the convection and strong storms lay to the east of the storm’s center. We think that the most likely scenario is that this pattern continues during the coming week, and we end up with a situation where most of the Texas coast north of Corpus Christi sees 4 to 12 inches of rain over the next week, with lesser amounts inland. This is very general, ballpark value. The key thing to remember is that this scenario would not lead to widespread, catastrophic flooding. 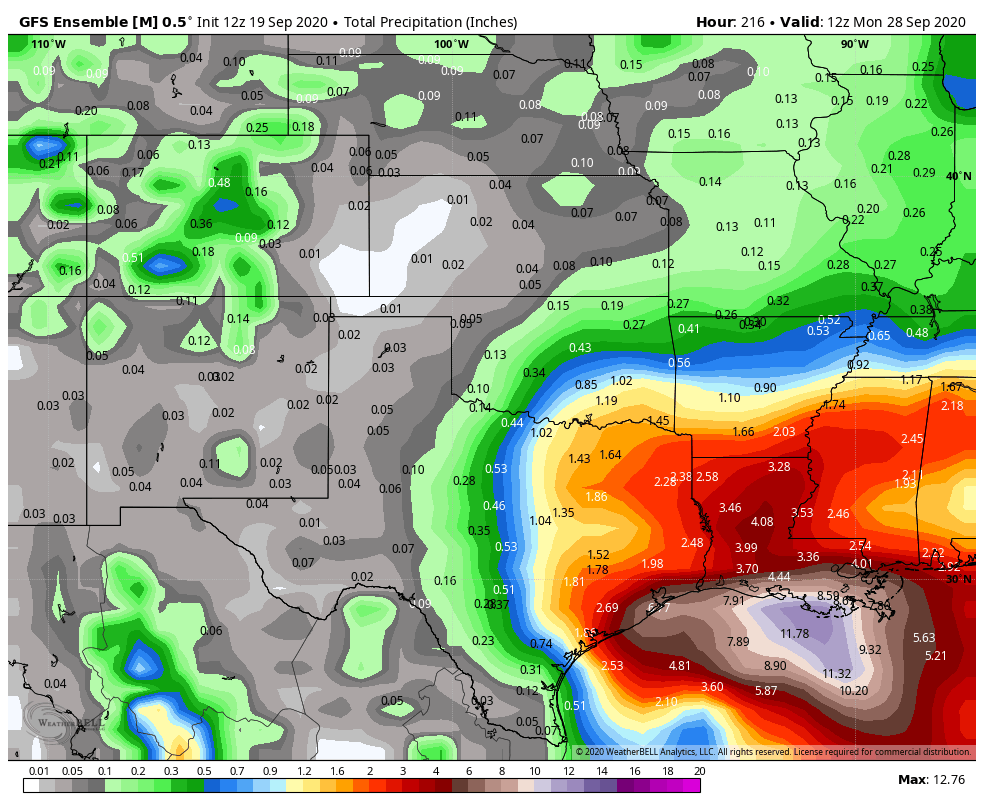 However, we cannot discount the possibility of Beta really getting its act together over the next day or two, and becoming a prodigious rainmaker over Texas. In this reasonable worst-case scenario, areas from Matagorda Bay to Galveston to Beaumont are at risk for 20 inches or more of rain, with 10-plus inches for parts of Houston. That is the high-end risk. But again we do not favor that scenario right now; and if our view changes we will let you know post-haste with a hasty post.

Our next update will come no later than 8pm CT this evening.

21 thoughts on “Tropical Storm Beta turns west toward Texas: Be wary, but not overly worried”