Apologies for being a few minutes late: Toddler life.

So Eric’s post from earlier this afternoon tackled a number of things, including track risks, our flood scale update, and the coastal impacts expected from now Tropical Storm Beta. In this update, I am going to focus primarily on the now and next couple days. We will close with a quick bigger picture update.

Tropical Depression 22 was upgraded to Tropical Storm Beta with the 4 PM advisory package from the National Hurricane Center (NHC). One of their key points, something that seems to be further backed up by the reconnaissance aircraft flying in Beta as I write this, is that the center is both somewhat elongated and seems to be perhaps a bit to the east of where it initially was expected. It’s important that we make note of how these changes in the specific location of the center impact the models over the next 12 to 24 hours. So, a satellite loop of Beta shows a storm that’s more like a “blob” of thunderstorms than a well-defined tropical storm

Beta initially being a blob is in line with what we’ve seen from a lot of storms early on over the last couple seasons. (Weathernerds.org)

But if you look at the data from the Hurricane Hunters in the storm, there are pockets of winds supportive of a moderate tropical storm already. Winds will likely be increased this evening during the 10 PM update to at least 55 or 60 mph. So despite the “blobby” nature of Beta, it’s already fairly formidable. With us heading into the typical nighttime ramp in tropical thunderstorms, we would expect additional gradual strengthening of Beta tonight.

As we go into Saturday, a number of things may happen with Beta’s center. It may come a bit to the north. It may meander not far from where it sits currently, or it may even reform in another section of the storm. It’s for these reasons that the storm track and rainfall impacts beyond the weekend are extra uncertain. We know that at some point tomorrow, Beta will begin to feel the influence of the strong area of high pressure to our north, which will be responsible for the glorious weather we have tomorrow morning. 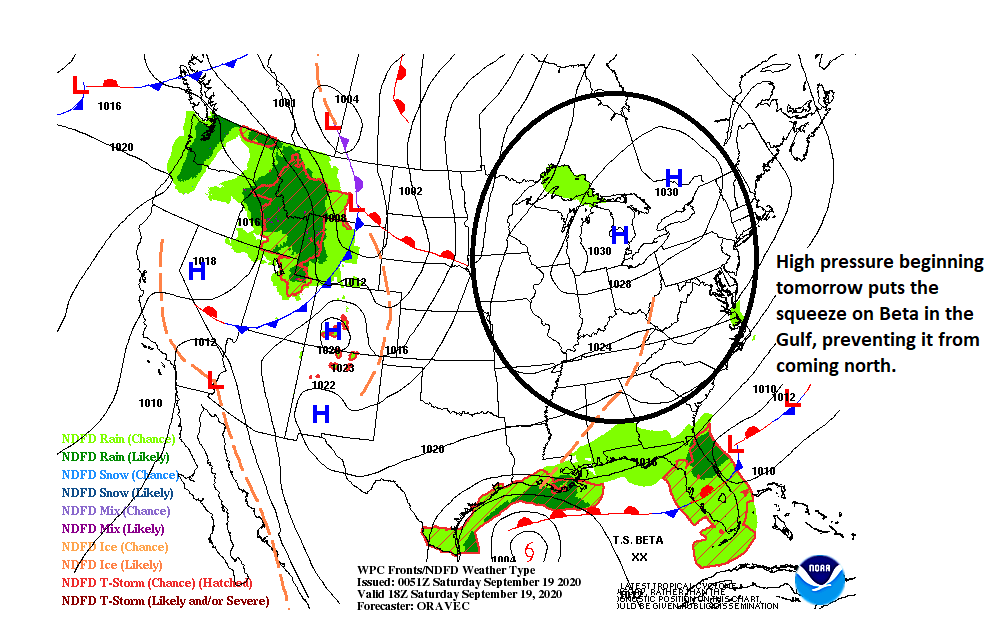 As that happens, Beta will basically screech to a halt and begin to drift west. And that will be Beta’s M.O through Monday: A slow drift west.

So what does that mean for our weekend? One strategy I have found in the many slow moving storms we’ve had around here in recent years is that it makes the most sense to focus most on what we know, the next 36 to 48 hours, and then touch base at a high level on the future. So let’s do that.

Saturday should start off sunny and pleasant. Look for clouds to gradually filter in during the afternoon, particularly south and east of Houston. A shower or two is possible by evening toward Galveston, Freeport, or Matagorda. No serious weather expected.

On Saturday night, we could begin to see some of the northern outer bands from Beta creep toward the coast, so I wouldn’t rule out a couple periods of showers or storms after midnight for coastal adjacent communities.

As we go through Sunday, look for this chance of storms continue at the coast and gradually spread inland. The way things are lining up right now, I would think we see outer bands on the coast off and on throughout the day. Inland areas may see some scattered storms, and perhaps a more organized, heavier single band of activity pivots across the region east to west through the morning and afternoon. Overall, conditions through Sunday evening should be manageable across the entire area. 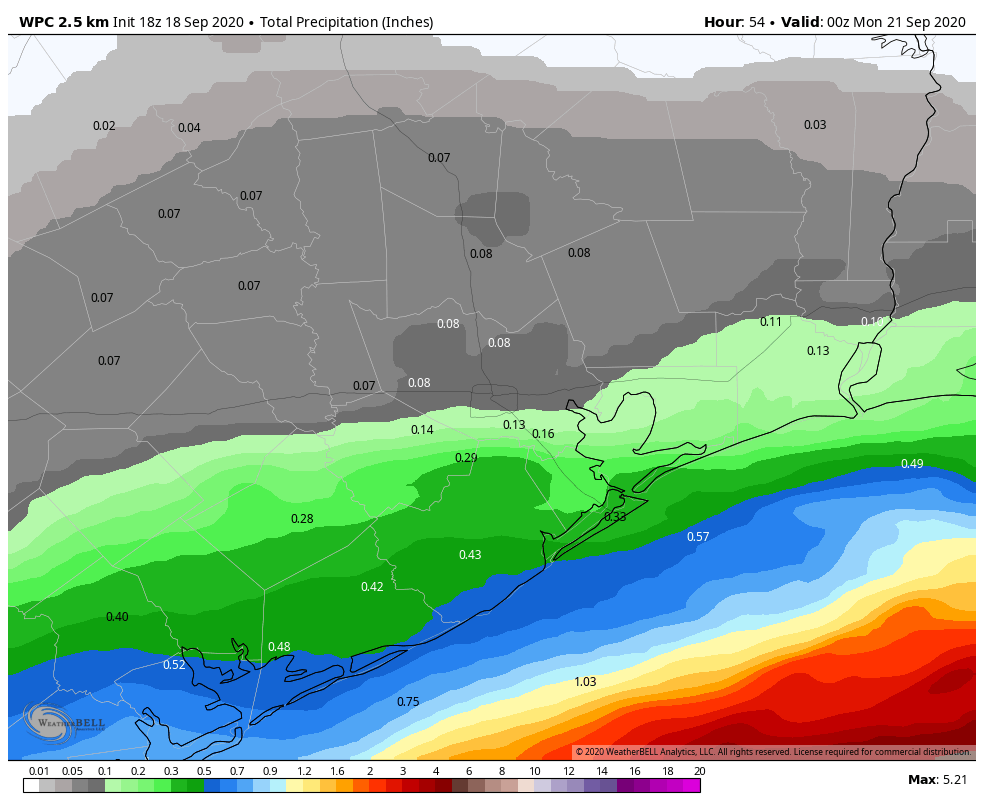 Rain totals through Sunday evening should be at most an inch or two along the coast, with lesser amounts inland. (NWS forecast via Weather Bell)

Rain totals by Sunday evening will likely be 1 inch or so on average at the coast, with risk for perhaps up to 2 inches or so between Freeport and Matagorda, right up along the coast. For the Houston metro, we probably range from minimal rain north and west to a quarter or half-inch in the city to perhaps three-quarters of an inch south and east of the city. Again, these are average amounts. Some will see less, some a bit more.

Coastal areas will begin to notice the rough surf and stiff, steady breeze pick up, and coastal flooding is likely to commence by Sunday’s high tide cycles (see Eric’s earlier post for more on that).

Sunday night into next week

Beyond Sunday evening, we expect Beta to approach the coast near Corpus Christi Monday and stall out for a time by Tuesday. This will keep continued periods of rain and storms in our area with breaks likely, but the heaviest rain will stay to our south and west. There is also a chance that heavier rain event could break out well out ahead of Beta. This would be from about central Louisiana into North Texas, away from the Houston area.

A plume of deep tropical moisture straight out of the Pacific, with perhaps some additional contribution from the southwest Atlantic is going to basically converge on Louisiana. You can see this on the GFS forecast of precipitable water for midnight Monday night/Tuesday. 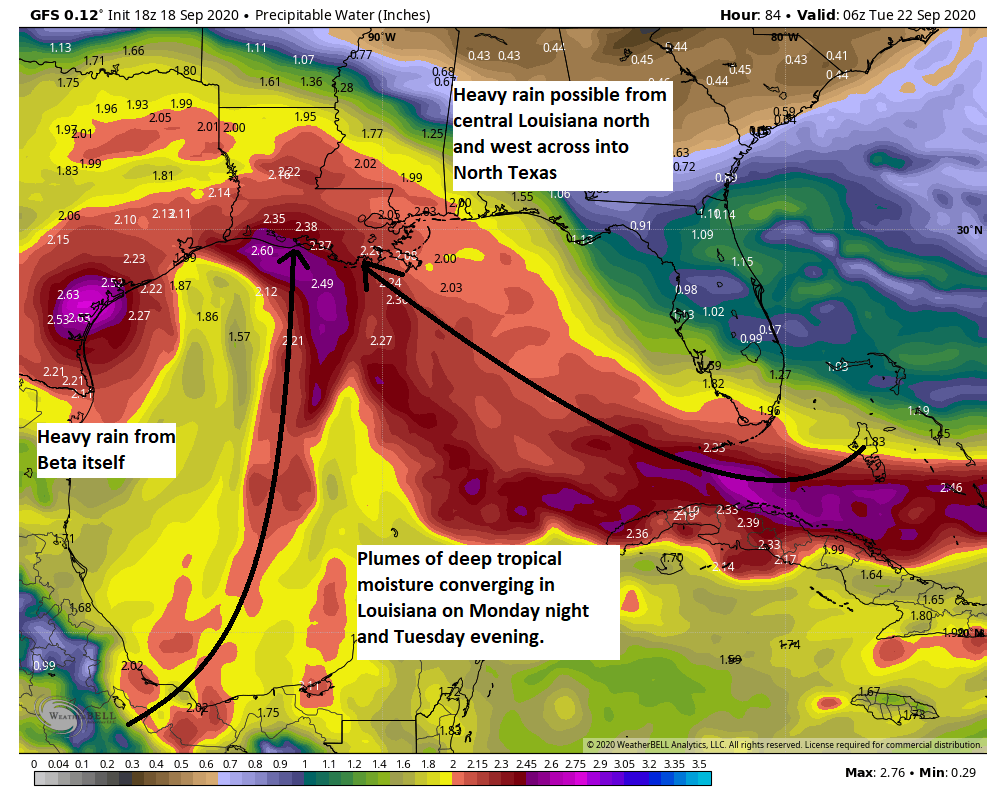 High precipitable water forecast around Beta may direct a distinct band of heavy rain into Louisiana and up north and west into northeast Texas. (Weather Bell)

This has been a more pronounced model wrinkle today that seems to suggest heavy rain will break out east of the Houston area and possibly east of the Beaumont area also. This would direct heavy rain into Louisiana that may perhaps expand and arc north and west into northeast Texas maybe north central Texas as well. The heaviest rain in that situation would stay both to our southwest and east on Monday and Tuesday. I don’t want to say that’s the “likely” scenario here, because a lot can change depending on how Beta is oriented at that time. If the storm is farther inland, that plume could end up much closer to Houston. If Beta is more offshore, we remain on the fringe of the heavier rain chances. So a lot of uncertainty here. We will keep you posted. Beta should begin to exit Wednesday and Thursday. But details are very much TBD at this time.

Eric will have our next update by 9 am CT on Saturday.