Last week, we discussed how 2020 had started off tremendously fast but slowed a bit. We’re coming out of that lull now, but thankfully what we are amassing is mostly curiosity rather than any serious impacts.

While another system is possible off the East Coast, the Gulf is not expected to deliver any action over the next 1 to 2 weeks, as summer roasts much of Texas.

With Tropical Storm Edouard being named on Sunday night, the Atlantic has now set a new record for the earliest 5th storm on record. The previous record holder was Emily back in 2005, which formed on the 11th of July. We typically do not see our 5th storm until the end of August, so we are off to the races right now. We’ll discuss 6th storm records in just a moment.

Again, there’s a huge difference between utilizing number of named storms and accumulated cyclone energy (ACE) to characterize the start to a season. Please see last week’s post for an explanation of the value and shortcomings of ACE. From the named storm standpoint, we’re at late August levels already. From an ACE standpoint, we’re at July 20th levels, not super abnormal. 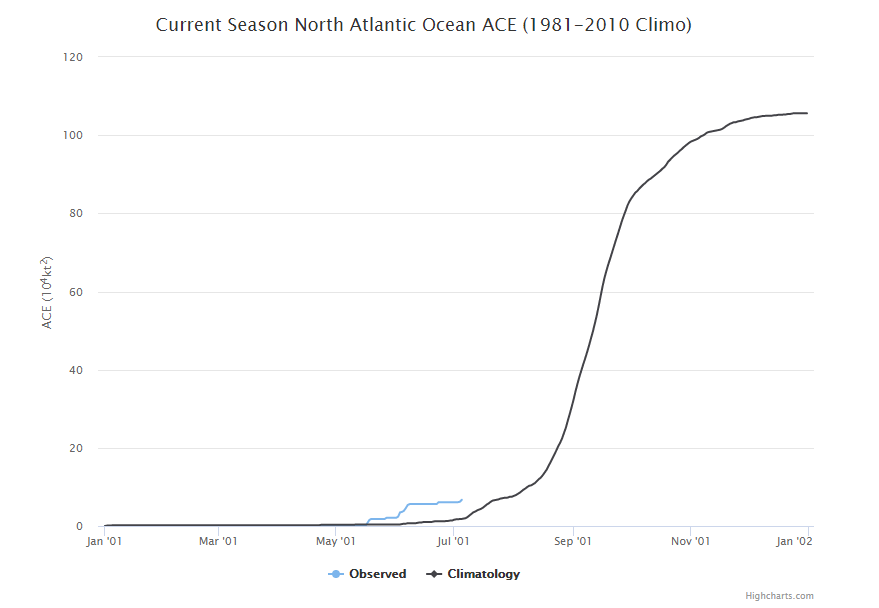 While named storms are up to typical late August levels already, accumulated cyclone energy (ACE) is only running about two weeks ahead of schedule right now, which is probably a more reasonable way to characterize the 2020 season thus far. (Colorado State)

Just to put this into a little perspective: In 2005, the year we keep beating for earliest storm, by the time the 5th storm dissipated on July 21st, we had amassed an ACE of 56, or what is normal for September 14th. As I’ve told some people, 2020 thus far is about quantity, not quality.

Of this year’s five storms so far, four of them have formed near or off of the East Coast. Could our next system come from that area? It very well could. A disturbance dubbed “Invest 98L” moved ashore on the Florida Panhandle on Sunday night. It is currently over northern Georgia and projected to lift to the north and east over the next few days.

Invest 98L is disorganized over Georgia today, but it does have about a 40% chance of developing as it pushes off the coast later this week. (Tropical Tidbits)

Right now, the National Hurricane Center is giving this about a 40 percent chance at becoming a tropical system over the next few days as it lifts north and east off the East Coast. If it does become a tropical storm, it would be named Fay, and it would break the record for earliest 6th storm (Franklin on July 21, 2005). This disturbance should produce heavy rain on the coast of the Carolinas, but at this point, it is not expected to cause much serious trouble before rolling out to sea.

We continue to see the bulk of the Atlantic basin littered with dust today. 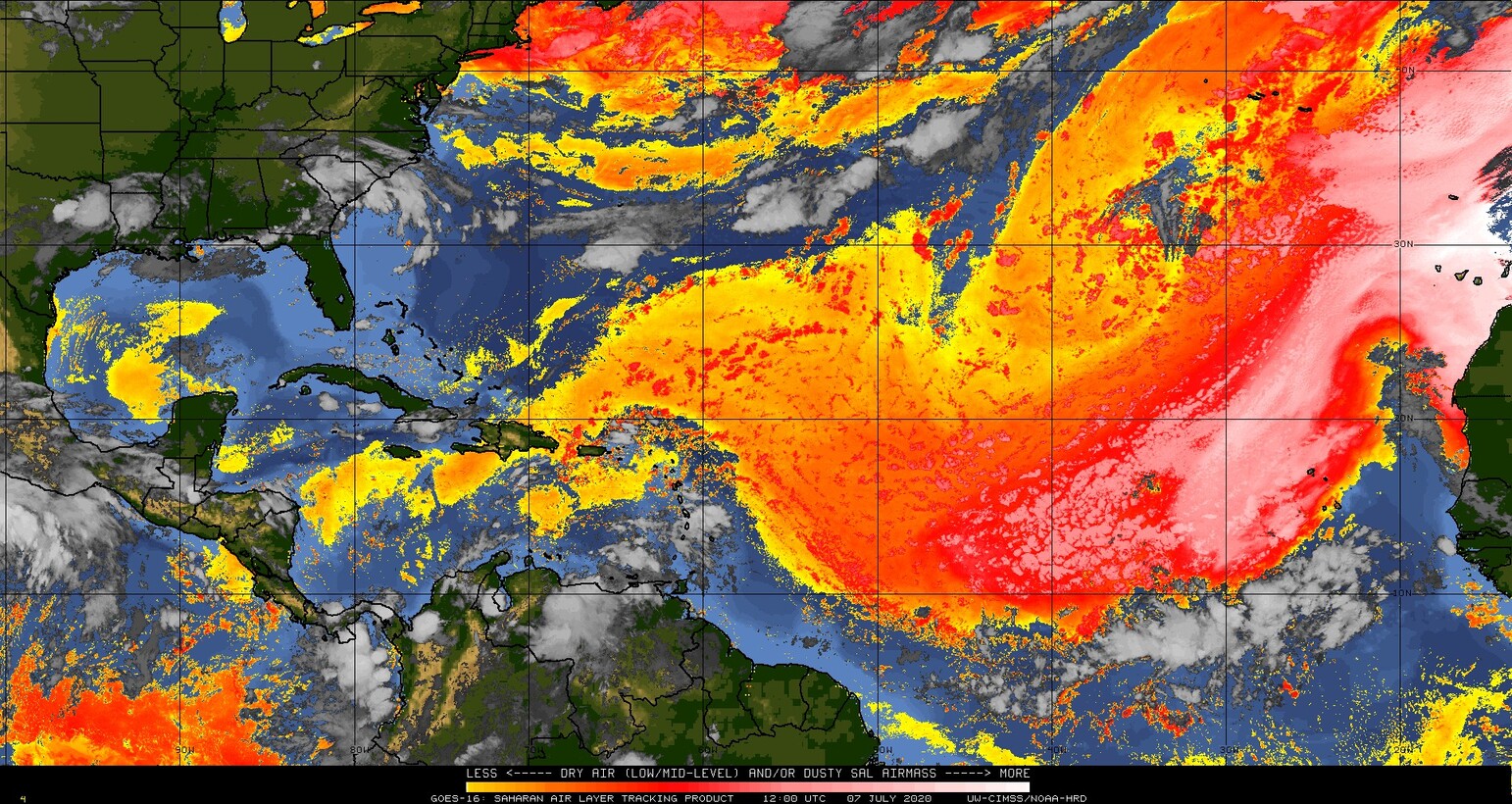 Widespread dust continues to hold over most of the Atlantic Basin, but it has eased up in density and coverage a bit. (University of Wisconsin CIMSS)

Dust, while widespread, is beginning to ease up a little relative to late June. The good news for us in Texas is that the quantities of dust reaching the Gulf are slowly diminishing, so we’re not expecting quite as ugly of an impact from dust over the next 10 days as we saw in late June up through this past weekend. Still, as dust rolls west across the basin, it’s always possible we see some in our area. But we do have something extra working in our favor by this weekend.

Look, some of us like the heat this time of year. Many of us deride as just something we have to accept about living here. Sometimes the heat can be good for something, and in our case, it would seem that it will help shield us from any Gulf happenings, including Saharan dust over the next week or two. To be clear, we don’t really expect any Gulf happenings, but in the off-chance something could form, strong high pressure over Texas would most likely deflect anything back to the east or well south into Mexico. Below, you will see the GFS ensemble mean forecast for days 6 through 10 (Sunday to Thursday next week), which shows high pressure in the upper atmosphere oriented just right to keep Texas protected. 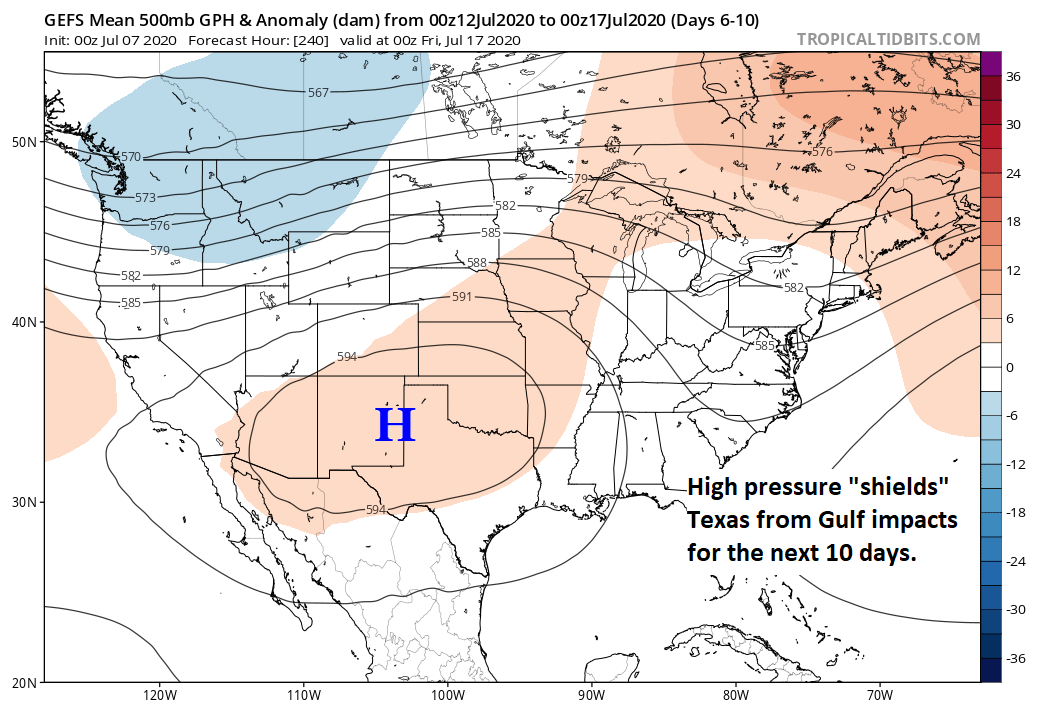 The upper air forecast for days 6 through 10 shows a rock solid, strong high pressure system over Texas, which should be enough to keep the region “shielded” from any Gulf impacts. (Tropical Tidbits)

Of course, that will come with a cost, assessed in triple digit temperature risk and heat index values. But as long as high pressure can hold over Texas, we’ll be pretty safe from the Gulf. We don’t expect that to last forever, but for the next week or two, it is expected to be quiet, albeit dry.

Our weekly tropical roundup is Powered by Reliant.

6 thoughts on “Tropical Update: 2020 continues to pile up storms and set new records”