Most of Houston saw cloudy skies, but not too much rain this weekend. But the same cannot be said for some coastal areas, particularly in Matagorda and Brazoria counties. As much as 10 inches fell in the Freeport area, and coastal regions in Matagorda, Brazoria, Galveston and Chambers counties remain under a flash flood watch through at least noon today. 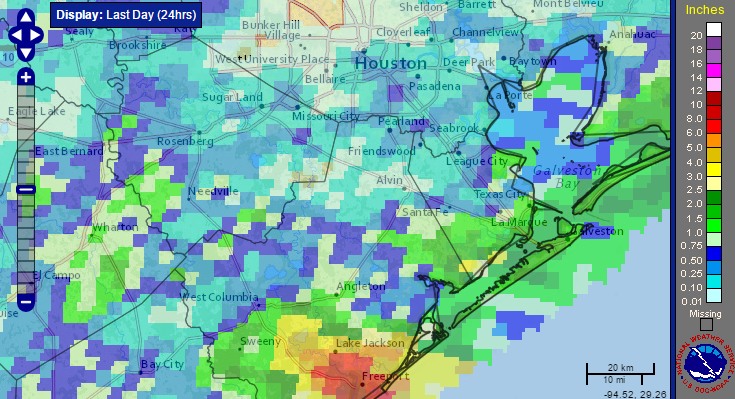 Very heavy rains fell south of Houston, on the coast, on Sunday. (NOAA)

These coastal areas could pick up another couple of inches today as a slow-moving area of low pressure drifts slowly down the Texas coast. While it is not particularly a threat to develop into a tropical system it will remain a rainmaker all the same.

Truth be told, heavy rain is possible for most of the Houston metro area today, as daytime temperatures warm up. Some parts of town could pick up 1-3 inches whereas other areas see threatening skies, but little to no rain. Highs should remain in the upper 80s.

Conditions should dry out some on Tuesday, with less heavy rain, but we’re still likely to see partly cloudy skies, intermittent rain and highs only of about 90 degrees. Don’t look now, but it’s almost the end of August, and fall isn’t too far around the corner.

END_OF_DOCUMENT_TOKEN_TO_BE_REPLACED

As one might expect at the end of August, the tropics are very active today. Here’s a Sunday roundup of everything that’s going on, with an emphasis on what might affect the Gulf of Mexico. 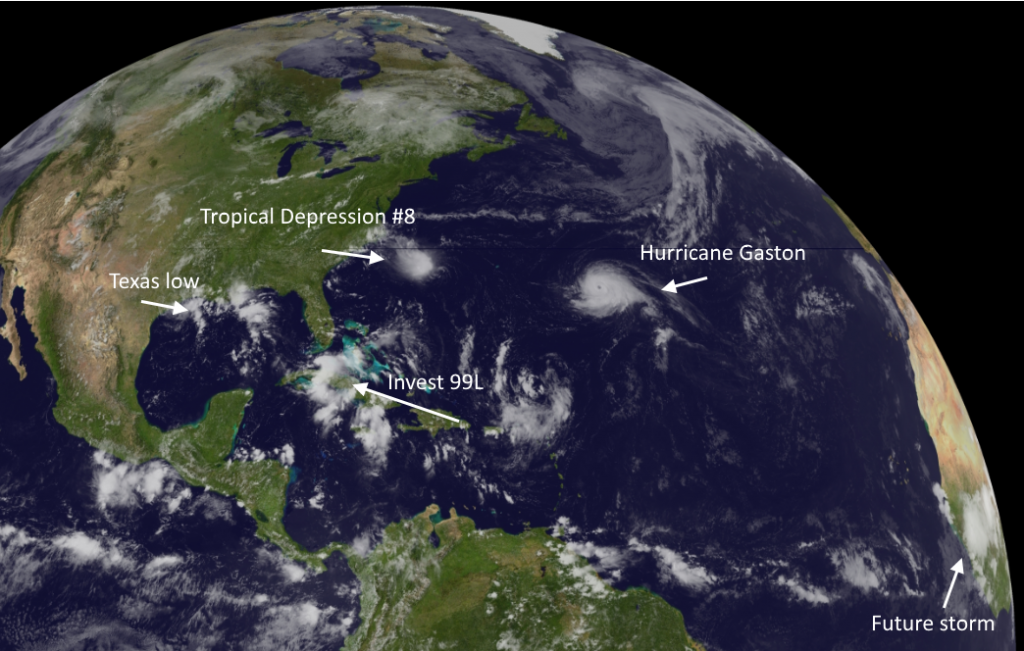 Gaston may be a beast, but we can only admire his eye and 105-mph sustained winds beauty from afar. A quick summary:

This storm developed quickly on Saturday night and Sunday morning, and may become Tropical Storm Hermine during the next day or so. This system is going to move toward the North Carolina coast by Tuesday or so, but shouldn’t strengthen much further due to increasing amounts of wind shear. Should still be a rainmaker for the Carolinas and possibly Virginia this week before it moves back out to sea.

Ahh, our old friend Invest 99L. It seems like we’ve been tracking this undeveloped tropical wave since about 2013. Matt joked that it might be the first Invest to ever get “retired” by the National Hurricane Center. With that said the system does look a little bit better on satellite today, and the hurricane center just upgraded it to a tropical depression. Here’s a look at the track models: 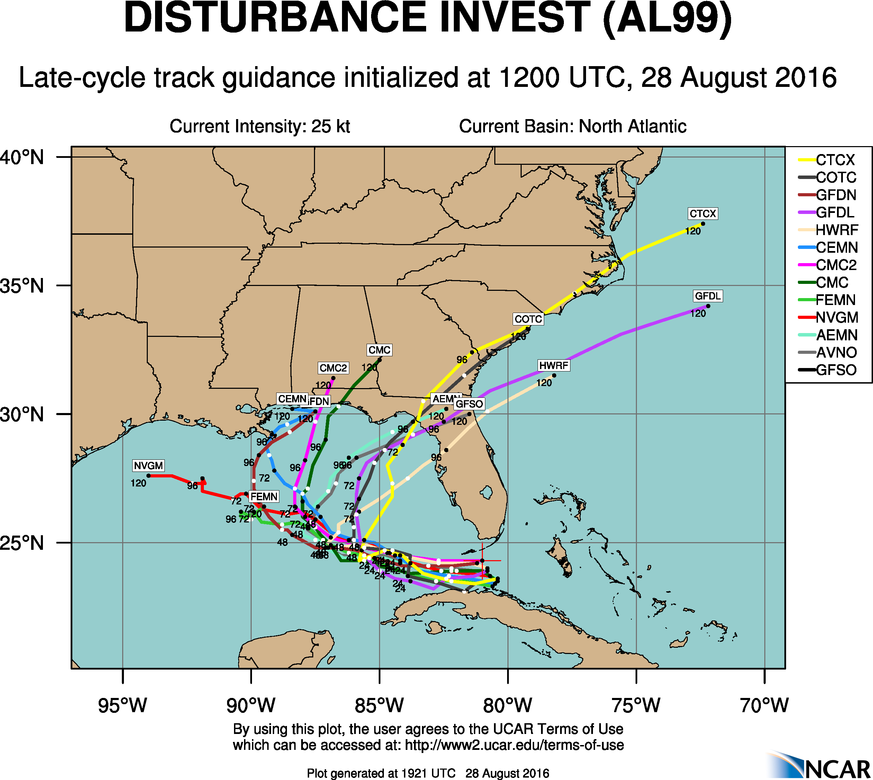 END_OF_DOCUMENT_TOKEN_TO_BE_REPLACED

Heading to the beach this weekend? I may not be your best friend after today’s post. After scattered showers and noisy storms on Thursday, we have some morning rain moving in today. Over the weekend, an upper level area of low pressure over the Gulf, sort of mimicking a disorganized tropical wave should help produce a good deal of rain and storms along the coast. This may keep beach weather at a bit of a premium going through the weekend, though there are still a couple question marks. The details…

A batch of rain was sliding in from the east this morning, and we have also had some thunderstorms along the coast. Weather models hold this shield of light to moderate rain together this morning, fizzling toward midday.

As we go into this afternoon, we should see additional hit and miss showers and storms pop up. Like yesterday, these storms will probably have a good deal of lightning and be capable of producing locally heavy rainfall. Not all will see them, but you’ll be well aware when you do. Temperatures should be held down a few degrees with additional clouds around, so expect upper 80s at best, mid 80s where clouds persist longer.  END_OF_DOCUMENT_TOKEN_TO_BE_REPLACED

After two drier, warmer days in the mid-90s—typical weather for August—Houston will slip back into a mild, wetter pattern.

As high pressure has retreated some, and moisture levels are fairly high, I’m expecting some fairly decent shower and thunderstorm coverage today, especially across southern parts of the metro area where precipitable water levels should be highest. Expect highs around 90 degrees, perhaps a bit higher to the northwest of Houston where rain chances should be lower. Showers may linger well into the evening and overnight hours.

A series of disturbances seem likely to approach the region this weekend, beginning on Friday, and with a tropical airmass in place we can expect to see a fair amount of rain coverage. These three days should see partly to mostly cloudy skies, and on-and-off rain showers. I’m not expecting anything too extreme, and most of the Houston area will likely see 2-3 inches of rain or less. However we can’t rule out some locally heavy rainfall, and brief street flooding, where the strongest storms develop.

Highs will be blessedly cool for late August—likely only in the upper 80s each of the three days. 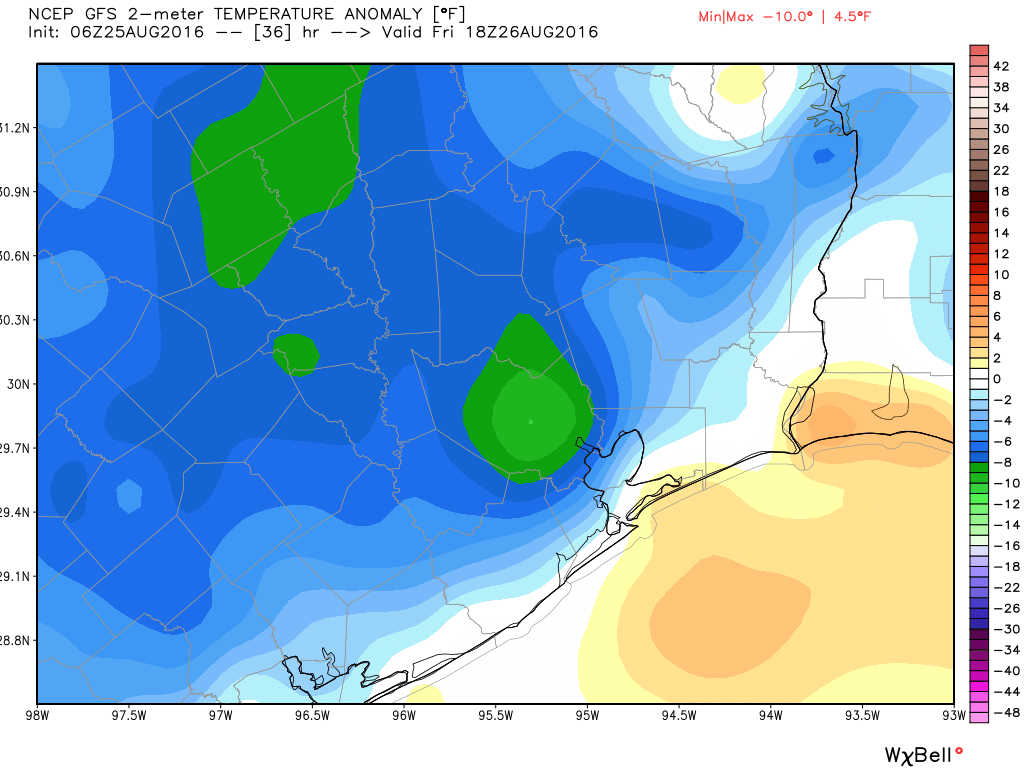 Temperatures on Friday could be a solid 8 to 10 degrees cooler than normal for August. (Weather Bell)