Summer roared back to Houston this weekend, with highs in the mid-90s across much of the region with mostly sunny skies. We’ll have more of the same this week, albeit with some slight afternoon rain chances on some days and a few more clouds to break up the sunshine. We’re not quite into the dead of summer—that typically comes about five or six weeks from now.

A bit of a tricky forecast today, because there is the potential for some rainfall even though most people are probably just going to see some clouds. A key factor today will be a plume of moisture moving into the central and southern Texas coast, which will lead to some pretty decent chances along the Coastal Bend. For Houston, the question is how far east these elevated moisture levels will get, i.e. will it get all the way to Galveston Bay? 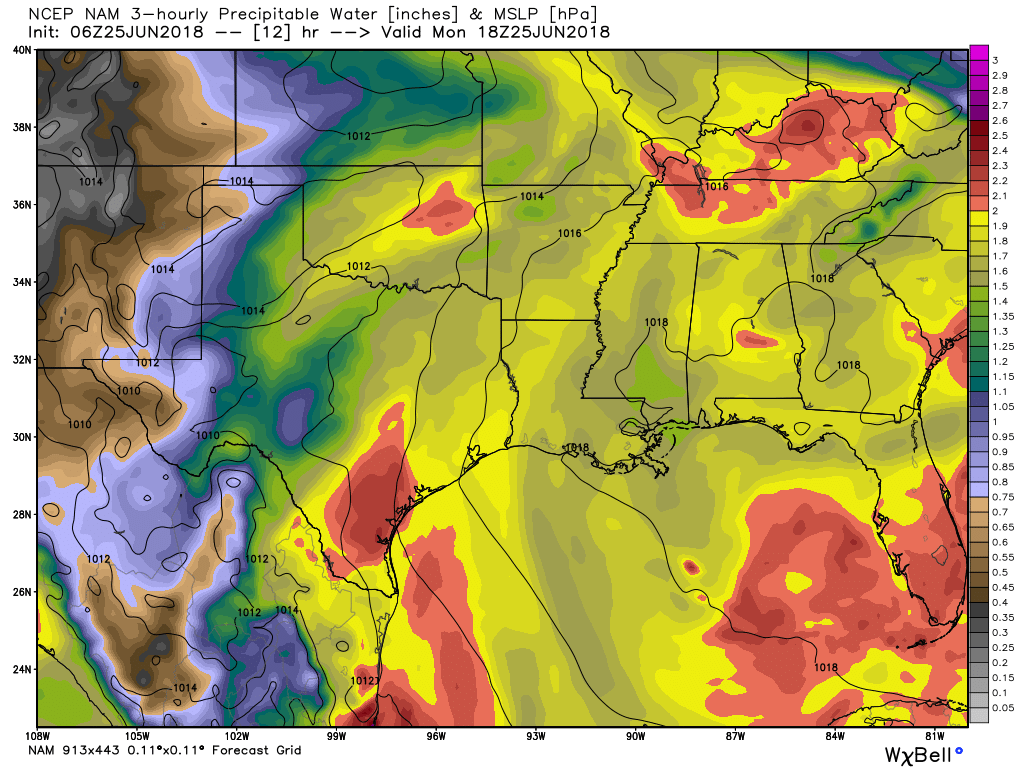 As as result, rain chances for the western half of the Houston region are probably in the 20 to 40 percent range, whereas there is a lower probability in the eastern half (i.e. to the east half of Interstate 45) probably closer to 10 to 20 percent. Temperatures will also depend upon cloud cover, but I’m pretty sure we can count on the mercury reaching into the low 90s, at least.

END_OF_DOCUMENT_TOKEN_TO_BE_REPLACED

One upside to this week’s rains has been temperatures, as Houston recorded five consecutive days with highs in the 80s in June for the first time since 2004. But that will change quickly, as sunny skies and highs in the mid-90s come roaring back to Houston with a blast of summertime heat. 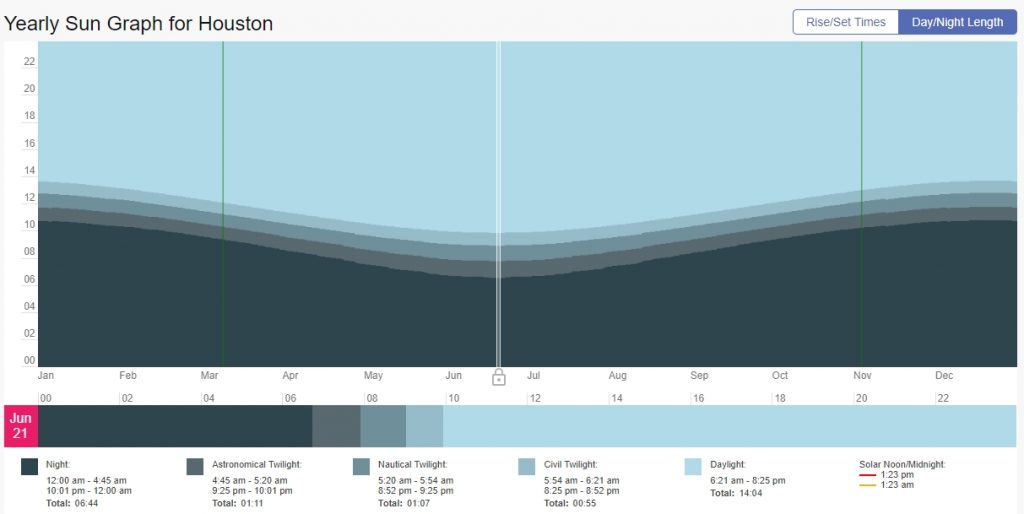 Chart showing the length of day (light blue), twilight, and night in Houston throughout the year. (TimeAndDate.com)

If you enjoyed the reprieve from 90-degree temperatures, all I can offer you is this. The summer solstice occurred Thursday, marking the longest day of the year—14 hours, 3 minutes, 30 seconds. The Sun will now slowly begin sinking in the sky, presaging the coming of fall about three months from now. Temperatures lag behind the summer solstice because water retains heat longer than land, and initially days will shorten by only a few seconds. For example, the day length today is 14 hours, 3 minutes, 27 seconds. However, by the middle of August, the day will already be 1 hour shorter, even though we associate that with the dead of summer in Houston. So fall is coming … eventually.

END_OF_DOCUMENT_TOKEN_TO_BE_REPLACED

After very wet commute home on Wednesday evening, Houston had a chance to dry out during the overnight hours. However, we have to get through one more day of storms—probably not as widespread as Wednesday—before drier air helps bring down moisture levels and puts us into a more typical summertime pattern. And make no mistake, these 80-degree days will be long gone.

Broken bands of precipitation persist along the Texas coast this morning, and these should remain on and off during the daytime hours although likely with less organization than we’ve seen. The system will shear out, and heavier precipitation will eventually move south into Mexico, and northeast into the central United States. 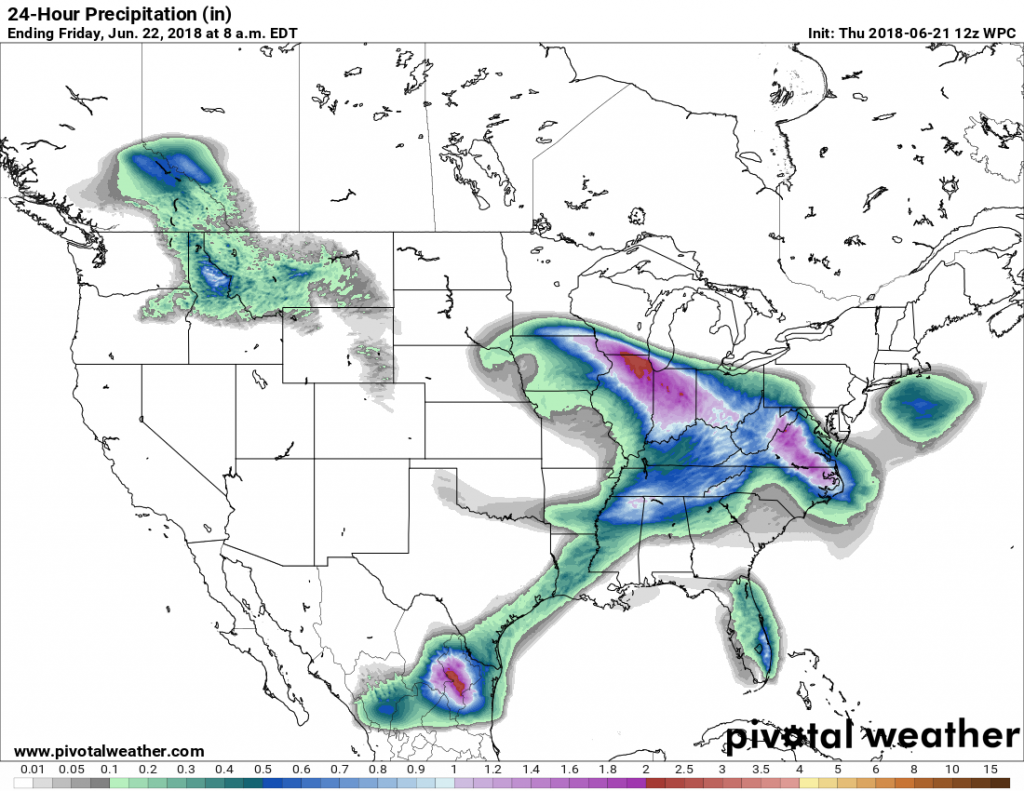 For the greater Houston region, this probably means another day of scattered to widespread showers, with accumulations of 0.5 to 1 inch of rain (likely greater closer to the coast), and a slight potential of some street flooding. Showers will be most likely this afternoon, and high temperatures should reach near 90 degrees.

END_OF_DOCUMENT_TOKEN_TO_BE_REPLACED

As a low-pressure system that had been southwest of Houston—and produced significant flooding in Valley locations such as Welasco today—has begun to be pulled to the northeast, heavier rains have moved into the metro area this afternoon and early evening. Although we are not too concerned about significant flooding from these rains, they unfortunately struck during the evening commute. 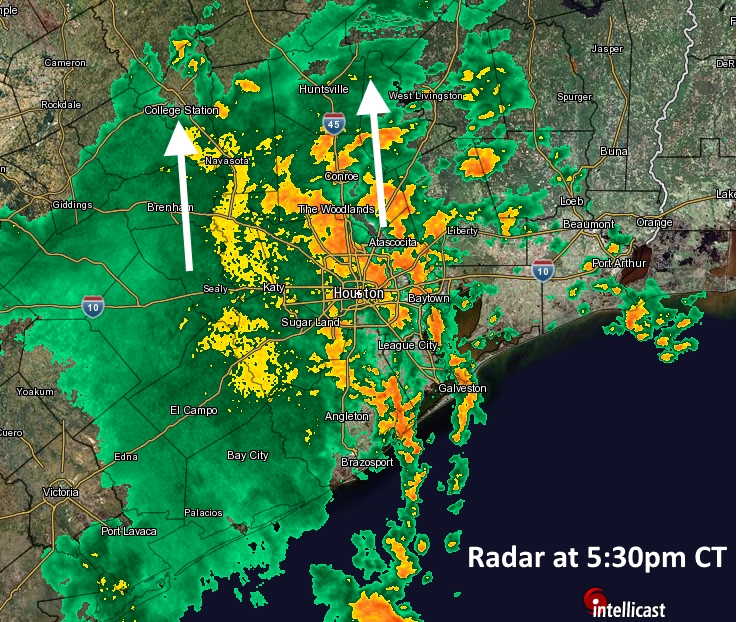 Radar as of 5:30pm CT on Wednesday. (Intellicast)

The good news is that the storms are moving to the north at a pretty solid clip, so the heaviest showers (with hourly rainfall rates of 1-2 inches) are moving through. We are starting to see some high water on roadways and freeway feeder roads, but as of 5:30pm this has affected just a handful of areas. Please drive carefully and do not drive into high water. These storms will pass.

We think this evening is probably the worst of it, but with a moist atmosphere and low pressure lingering, there probably will be some additional showers on Thursday—with some areas picking up another 1 to 2 inches of rainfall. If any of this changes, we’ll update you.