After Saturday’s storms, and then the blustery cold front, Houston will see a lot of sunshine. Then we’ll see another front Thursday, which should hopefully set us up for a mostly sunny holiday weekend. We can be pretty confident in this point in a rain-free Easter, at least as confident as one can be six days out. 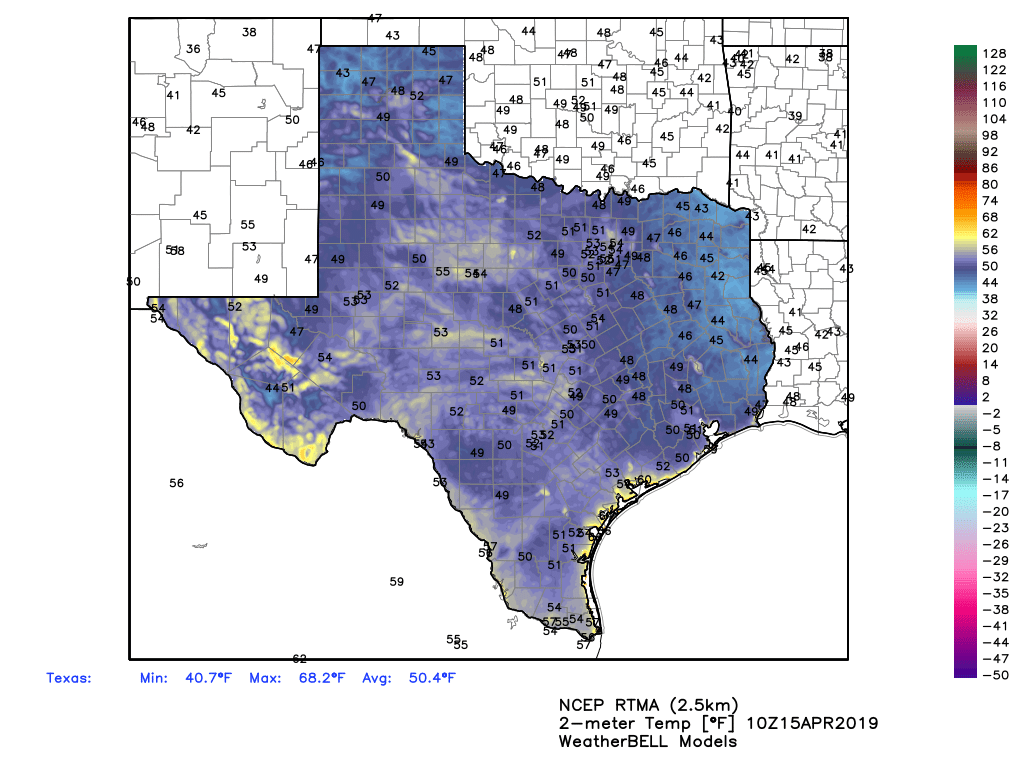 For mid-April, a rather cold morning for nearly the entirety of Texas. (Weather Bell)

Today should be a rather pleasant day for the region, with sunny skies, and highs around 80 degrees. South winds will pick up a bit today, so the drier air we saw this weekend will give way to rising humidity. Lows tonight will be down around 60 degrees—warmer along the coast and a bit cooler inland. One concern: Today is an ozone action day for Houston, when high levels of ozone pollution are possible.

As southerly winds return, we’ll see an increase in clouds on Tuesday, although the sunshine won’t go away entirely. Southerly winds will be noticeable, likely picking up to 15 to 20mph, and this increasing moisture will set the stage for some rain showers later in the week. Highs Tuesday will depend upon the extent of sunshine over your location, but probably will be in the vicinity of 80 degrees. Lows Tuesday night, as clouds build and with the influx of warmer air, are unlikely to fall much below 70.

END_OF_DOCUMENT_TOKEN_TO_BE_REPLACED

We’ve arrived at the doorstep of another weekend, which naturally means another chance of rain and storms. Let’s discuss how things should unfold.

First, we’ll end the week on a mostly quiet note. Look for a good deal of clouds today. A few showers were seen on radar this morning down toward Matagorda Bay. Models aren’t especially bullish on rain chances today, but I wouldn’t be shocked to see some passing showers or even a thunderstorm, especially along and southeast of US-59 today. Temperatures will range from near the upper-70s to perhaps 80 or so with any sunshine this afternoon.

Clouds will thicken up further as onshore flow ramps up. As moisture increases over the area, I expect a good deal of showers to develop and lift from south to north across the region. A thunderstorm is also possible. Most of us should just see a little rain tonight and Saturday morning. At this point nothing significant is expected. Low temperatures will be quite warm tonight and Saturday morning, barely dropping below 70°, if at all.

Like last weekend, I am going to set you up with a user’s guide Q&A to this weekend’s storm.

When is it going to rain on Saturday? Overnight showers may try to diminish on Saturday morning. But any break should be relatively brief New showers and some thunderstorms will form in the later morning, especially on a line from Victoria to Sealy to Conroe to Lake Livingston. The best concentration of storms will be north of I-10 and probably along or north of Highway 105. This would basically be Conroe, Huntsville, Lake Livingston, Madisonville, etc. That’s also where the best chance for severe weather will be in our area. The really nasty stuff will be way off to our north, up toward Lufkin and Shreveport, LA. More on severe weather in a second.

You’ve mentioned severe weather. What do I need to worry about this weekend? The Storm Prediction Center has adjusted their outlook again today. 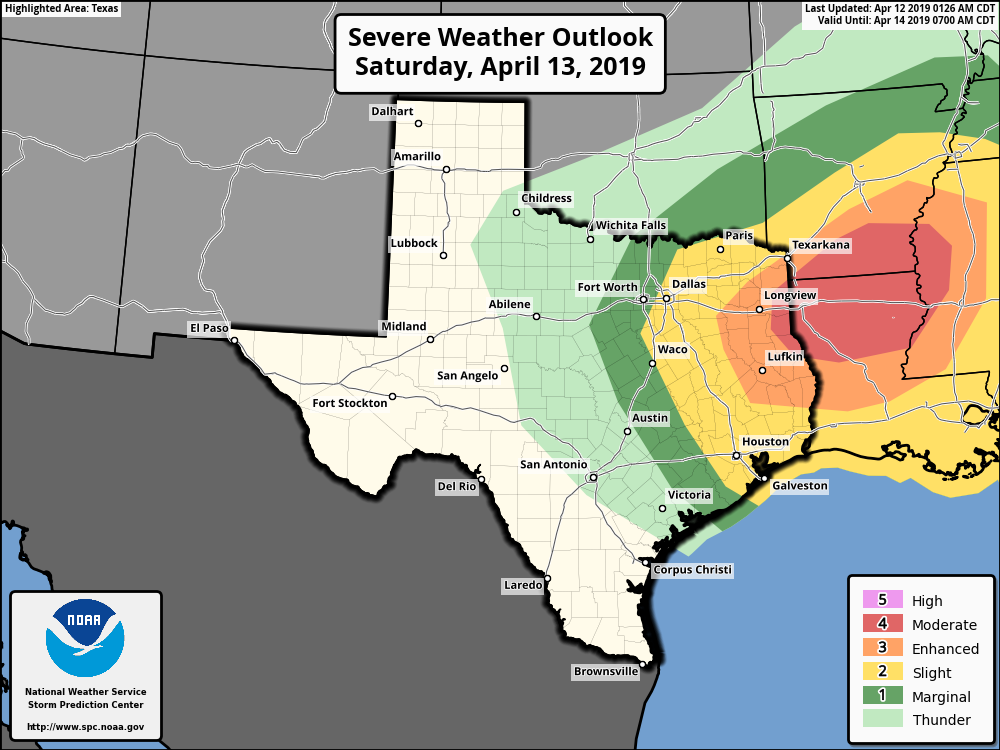 Severe weather risk in Houston ranges from marginal to slight. Risks increase significantly to the northeast of our area. (NOAA)

Most of the Houston area is in a “slight” risk for severe weather. That increases dramatically to enhanced and then moderate as you head toward Lufkin and Shreveport. As mentioned above gusty winds and hail will be the main severe weather concerns this weekend around Houston. At this point, it would appear that Saturday’s storms will not be of the same coverage or intensity as last weekend’s severe storms were in the Houston area. Still, we’ll keep tabs on things to make sure that doesn’t change. As far as tornadoes go, they are unlikely in and around Houston.

So what about the Houston area? What should we expect? While the heaviest storms and rain will lift off to the north of Houston, I do expect at least a line of at least broken storms to develop Saturday afternoon.I would probably expect that line of thunderstorms Saturday afternoon, most likely between 2 and 6 PM from west to east across the Houston area. I don’t expect it will rain that entire time, but look for a short period of some heavy rain and thunder as that passes through. To reiterate, if storms become severe, the main threats will be strong winds and hail. The most likely portions of the area to see this will be to the north and east of Central Houston. Again, this shouldn’t be like last weekend, but we will keep watch.

END_OF_DOCUMENT_TOKEN_TO_BE_REPLACED

After two almost summer-like days, Houston’s temperature will now take a bit if a step back toward spring. Looking ahead to the weekend, Saturday still looks messy, but Sunday sure should be fine. Plan your activities accordingly.

Temperatures are quite warm this morning, with lows only getting down to around 70 degrees for much of the region. Partly cloudy skies and the approach of a weak cold front will help to moderate temperatures today, likely keeping them in the low- to mid-80s. The front should stall somewhere between downtown and the coast this afternoon, and could serve briefly as a focus for scattered, light showers south and east of Highway 59. Lows tonight will get into the 50s for areas well inland tonight, and 60s closer to the coast. 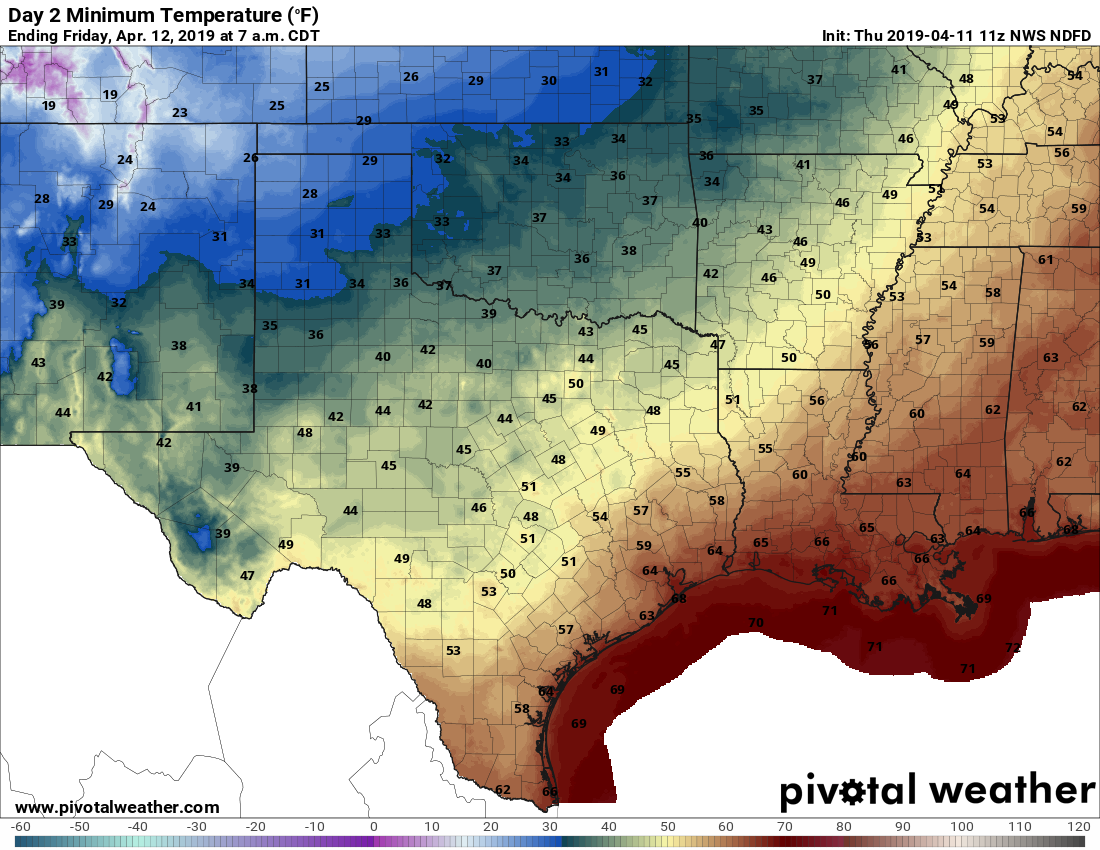 Lows Thursday night will be cold in the Panhandle, and much warmer on the coast. (Pivotal Weather)

A partly sunny day, with highs likely in the low- to mid-80s. Any remnant of the front will be blown away by the onshore flow later in the day, setting up another warm night. The moisture will help drive rain showers on Saturday.

END_OF_DOCUMENT_TOKEN_TO_BE_REPLACED

Houston did, in fact, reach 90 degrees on Tuesday for the first time this year. It’s about the right time for this milestone—although last year was nice in that the city didn’t get this warm until May 7. If it didn’t feel that hot outside, the reason is that humidity levels were quite low for Houston. That probably won’t be the case when 90-degree temperatures come rolling around again for us. Anyway, today should be warm again, but then we’ll cool down for the weekend. 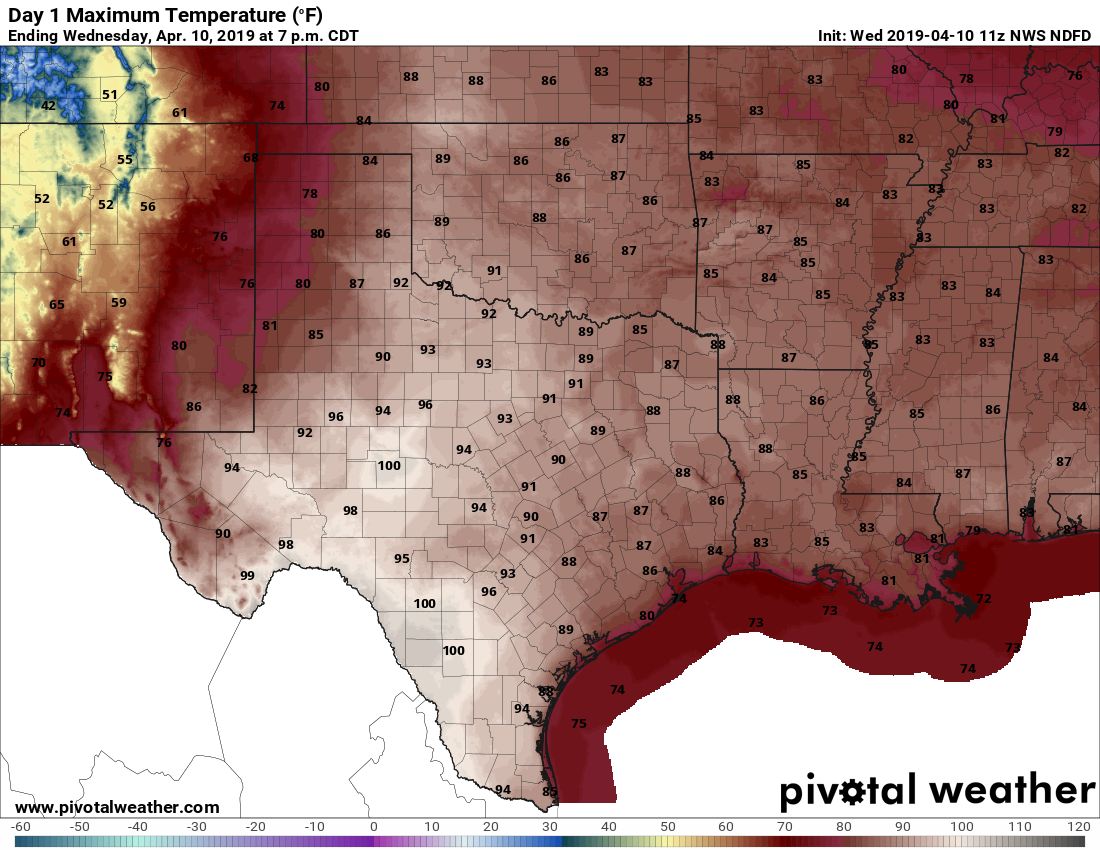 Winds have already shifted to come from the south, and this will make for a more humid day. The increased moisture levels should also act as an anchor on warming today, so I’d expect most areas to stay in the mid- or possibly upper-80s beneath mostly sunny skies. Winds will be gusty, perhaps above 20mph, as the onshore flow kicks in. Lows tonight will probably fall into the mid-60s for most.

Some clouds will return Thursday, but the day’s high temperatures will largely be determined by the timing of a weak cold front, which probably will push into the city sometime around noon. Depending on how much warming there is before the front, temperatures will either get into the low-80s, or the upper-80s. Most likely this will be a dry front, although we can’t rule out a very few showers as its pushes through the region. Lows should fall to 60 on Thursday night.