Good morning. If you were surprised by the widespread nature of showers and storms on Saturday and Saturday evening, you’re not alone. The forecast for Saturday—we expected sunshine and dry air to prevail—was a total bust. Matt did an analysis of the event on Twitter, and summarized the situation as follows, “Yesterday in Houston was one of the most impressive forecasting busts I’ve witnessed & been part of in a long while.” Needless to say, we’ll learn from this.

Houston is enjoying a pleasant morning, with lows down near 60 degrees in the city. Today should be another sunny affair, with highs pushing into the mid-80s. Humidity will be much more noticeable, as winds really pick up from the south, possibly gusting to 20mph. As a result of this more southerly flow, clouds should build tonight, and this should help prevent low temperatures from falling much below 70 for the area. 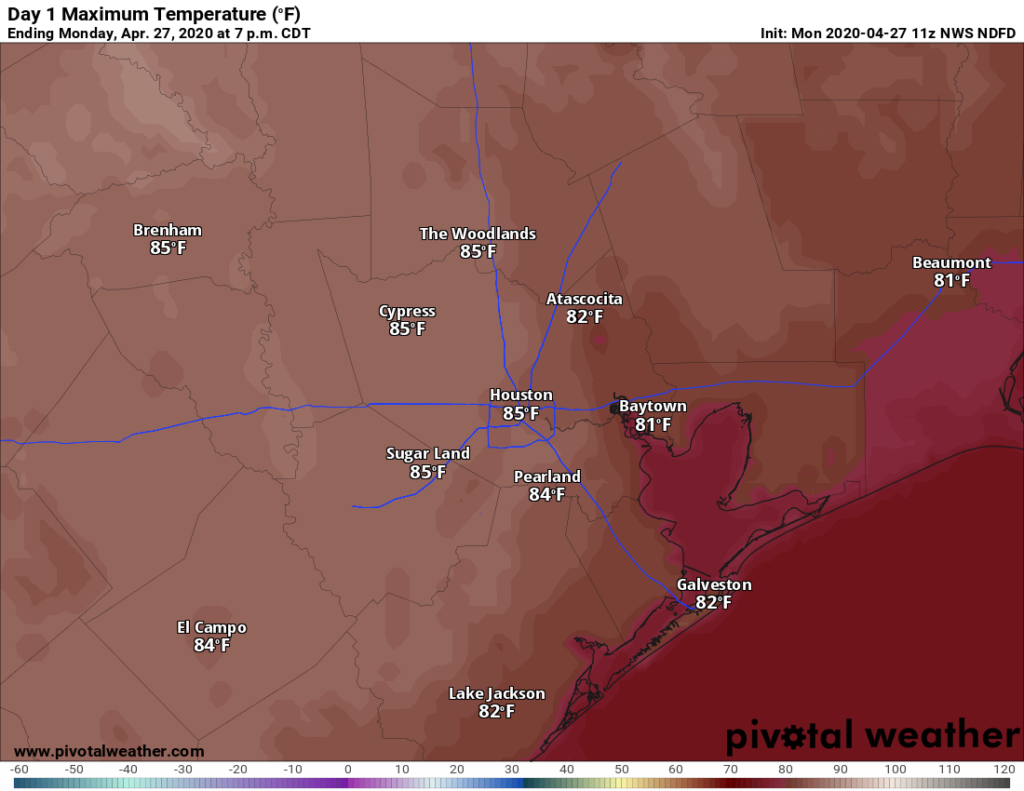 High temperatures on Monday will be in the 80s. (Pivotal Weather)

Clouds will remain on Tuesday, but highs will still get into the mid- to upper-80s as a warmer pattern prevails. Winds will still be active, blowing out of the south at about 15mph. A few scattered showers are possible Tuesday, but the better rain chances will probably hold off until the overnight hours. END_OF_DOCUMENT_TOKEN_TO_BE_REPLACED

Well, some days Mother Nature can still surprise you.

As late as last night it appeared the atmosphere would dry out at all levels in the wake of Friday night’s cool front. However, that has not happened sufficiently. As a result, a fast-moving kink in the atmosphere will cross Houston from west-to east from around 1pm to 4pm today, and have enough moisture to work with to produce storms. The threat is briefly heavy rainfall and hail.

The storms should clear the area quickly, and we expect mostly sunny weather before and after, with a pleasantly cool evening. Low temperatures on Sunday should drop into the upper 50s for areas north of Houston, and we do expect a fully sunny day for the second half of the weekend.

Since the weather is not terribly busy, let’s start with a couple housekeeping items today. First, the National Weather Service surveyed the damage from Wednesday’s tornado in Onalaska yesterday. They found that a tornado traveled from at least near Waterwood, on the west side of Lake Livingston through at least Barnes, in northeast Polk County. 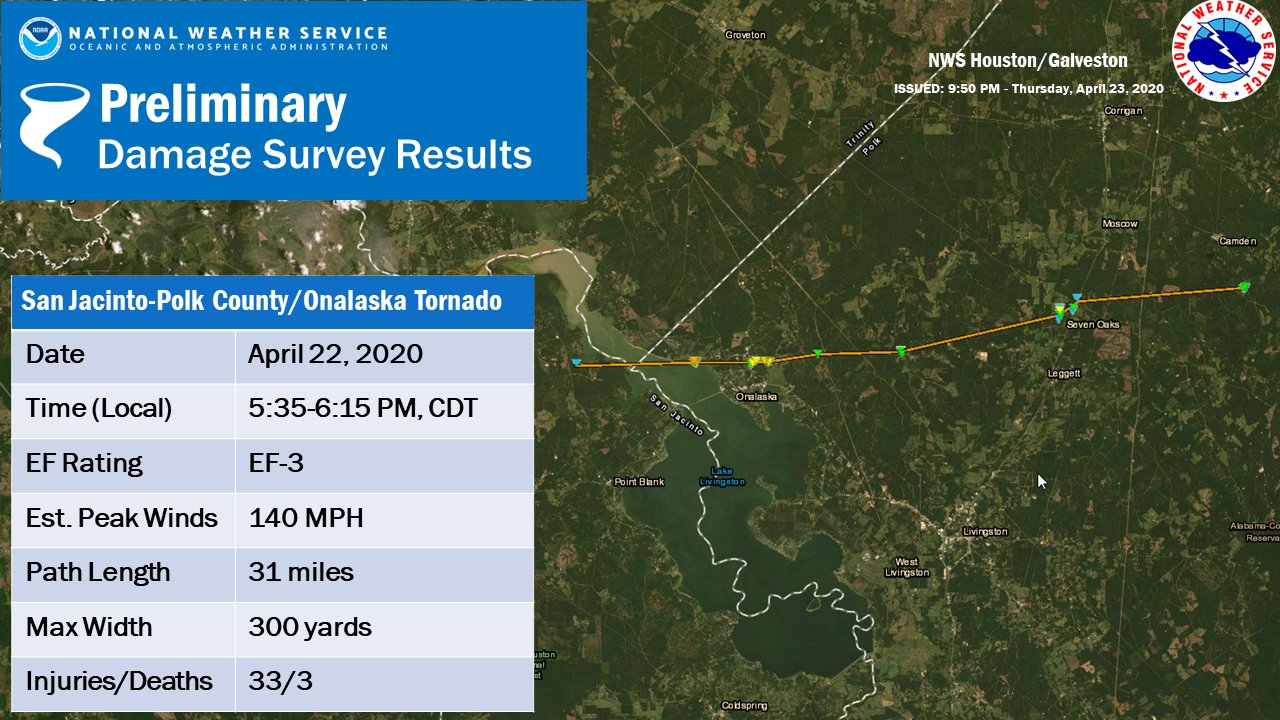 Preliminary track and summary details of the Onalaska tornado from the NWS Houston. Click to enlarge. (NOAA)

That’s a little over 30 miles, though it could change as more reports are examined. The survey team found mostly EF-1 and EF-2 damage in Onalaska, but they did find low-end EF-3 damage in Paradise Acres, just north of Highway 190 on the northeast shore of Lake Livingston. Maximum winds were estimated to be 140 mph.

Radar image from around 5:40 PM Wednesday, as an EF-3 tornado was bearing down on Onalaska. (RadarScope)

One of the other issues we have had that we’ve touched on from time to time, is dry weather. The latest drought monitor from yesterday shows the northern side of the Houston area mostly drought free, but steadily increasing drought conditions as you go south of the city. 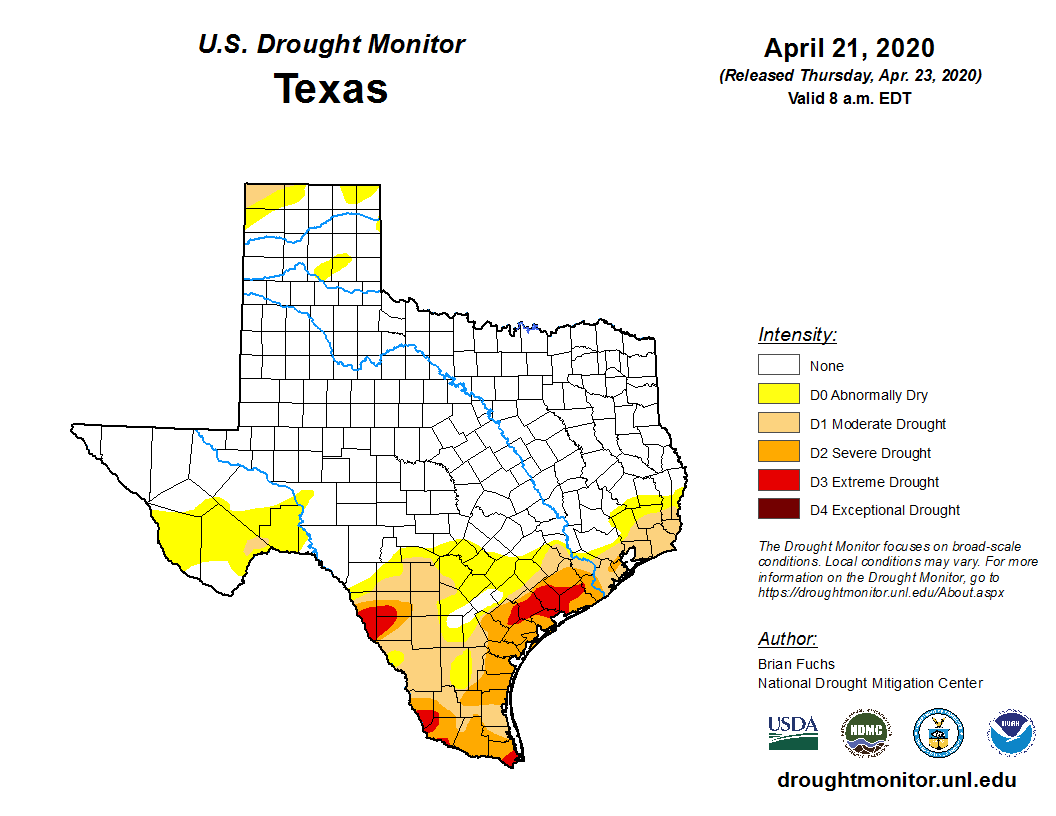 Most of Texas is drought-free. For our area, drought steadily increases as you go south of I-10 or southeast of US-59. (US Drought Monitor)

The entire Gulf Coast from Texas to Florida, which has been dominated by a ridge of high pressure for most of the winter and spring, is under some kind of abnormally dry or drought condition. Until that stagnant pattern can break or the daily afternoon thunderstorms of summer fire up, we will probably continue to see most organized storms pass us by to the north. We will keep tabs on things and let you know if that does change of course.

Alright, onto the forecast.

Most areas are crystal clear this morning, but some patchy fog has shown up in a couple spots. Either way, that will clear and we should expect mostly sunshine today with highs making a run for 90° this afternoon.

As a cold front begins to approach the area this evening, it could be carrying some thunderstorms. Areas north of Houston, unfortunately, stand the best chance of seeing these. Those storms could be locally strong to severe north of Houston, but they should be quick moving and the main threats would be isolated damaging wind or hail. Storms should begin to weaken as they approach Houston, and the most likely areas to see rain this evening would be along or east of I-45.

Bottom line: With a cold front approaching this evening, don’t be shocked to see a little rain or hear some thunder for an hour or two.

END_OF_DOCUMENT_TOKEN_TO_BE_REPLACED

Good morning. Storms passed to the north of Houston on Wednesday evening, and the severe weather produced one particularly strong tornado that touched down just north of Huntsville and Livingston, striking the community of Onalaska hard. Meteorologists from the National Weather Service will investigate the location today to determine the intensity of the tornado and its path.

Local residents described the tornado as “devastating,” and at least three people were killed. As most of us went to bed last night, this small community was looking for lost people, assessing injuries, and finding temporary shelter outside their damaged or destroyed homes. Tornadoes this strong in the greater Houston region are rare, but possible. The following image shows the storm’s path as indicated by rotation on radar. 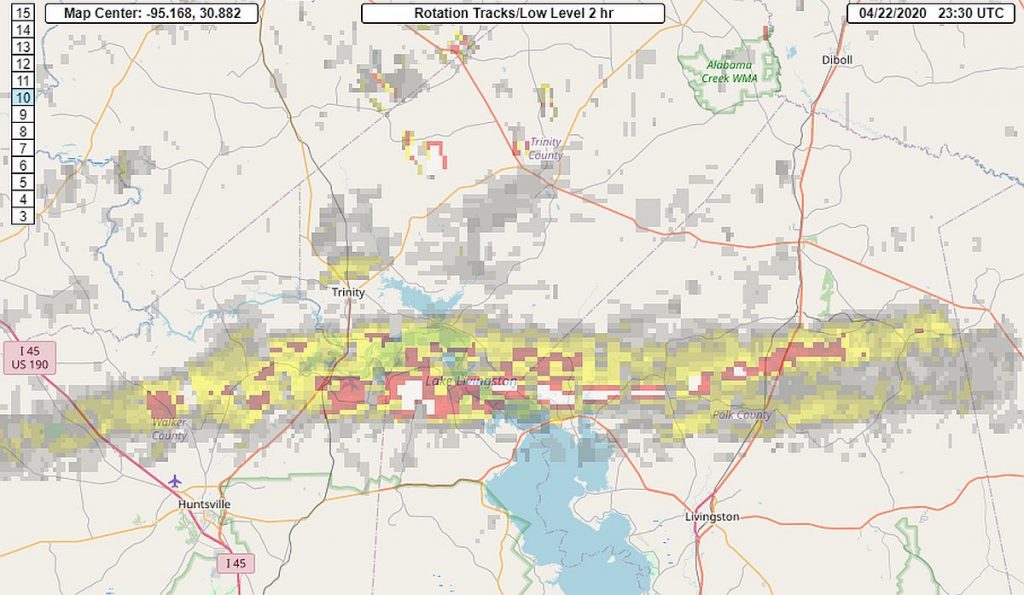 The entire Houston metro area will now settle into a much more sedate weather pattern, with sunny weather for days and days.

A cool front is moving into Houston this morning, and this will help drop moisture levels today. This, in turn should help to clear skies by mid- to late-morning. Light winds will blow out of the north. This afternoon, high temperatures will reach the mid- to upper-80s under sunny skies. As the sun dips toward the horizon tonight, we’ll be in for a real treat as the drier air allows temperatures to drop into the 70s and then 60s overnight.