Yesterday, I talked about the merry-go-round nature of Houston’s weather during the winter—the ebb and flow of cold fronts, then warm fronts, and then cold fronts—and that pattern will very much remain with us for the foreseeable future. So strap in to ride that winter roller coaster, y’all!

Today will definitely be on the cooler side. Lows have generally fallen into the low 40s across most of the metro area, and we’ll be slow to warm up with a persistent northeasterly flow. High temperatures for some locations may not even reach 60 degrees, despite partly to mostly sunny skies. Winds will shift to come from the east overnight, and this will allow for some clouds to form. Lows on Thursday night should be similar to those of Wednesday night.

As high pressure moves away, winds will start to blow from offshore. However, given the dry airmass in place, Friday should still be a sunny, relatively cool affair with highs in the mid-60s. The more moist flow from offshore will really make its presence felt by Friday night, with mostly cloudy skies, and lows only dropping into the upper 50s. 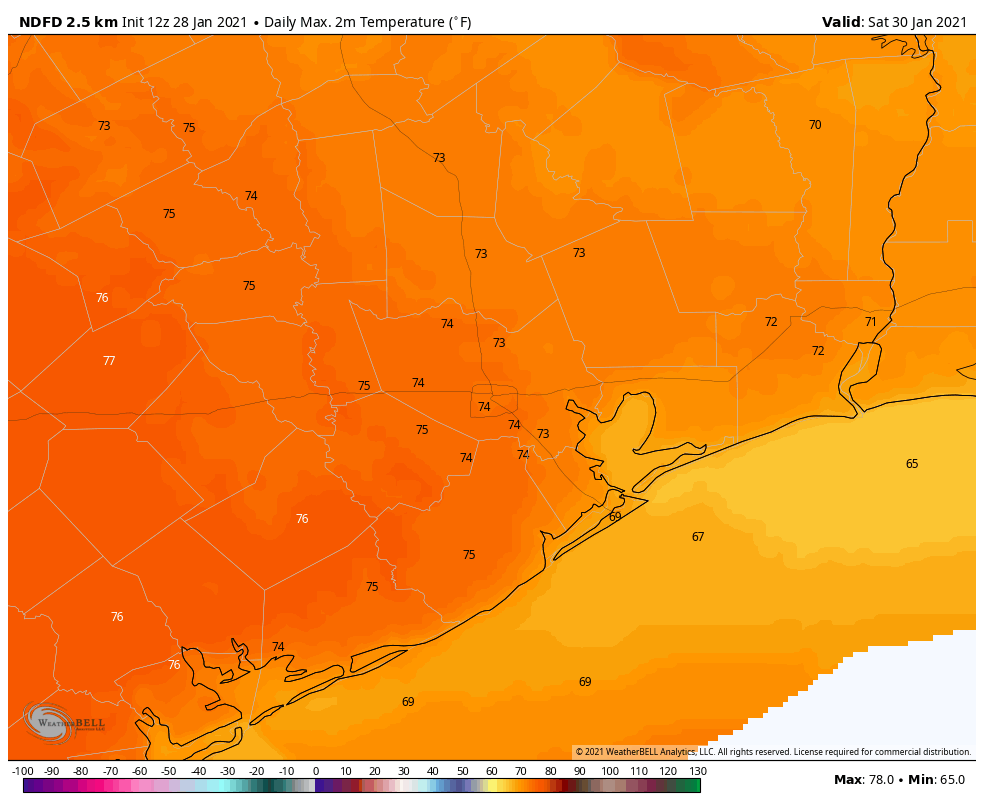 Saturday will be a warm day, for January. (Weather Bell)

After the warmer night, Saturday could start out with some fog, especially near the coast. This will be a warmer day, with highs nudging up into the mid-70s, despite mostly cloudy skies. Later in the day, or during the evening hours, very light rain may fall across parts of the city, but this should be more of a misting than an accumulating rainfall for most. Saturday night’s low temperatures will depend on the timing of the front, which is likely to move through between midnight Saturday, and sunrise on Sunday, give or take. A broken line of showers may accompany the front’s passage.

This should be a sunny, breezy day, with highs in the upper 60s. Lows will drop into the 40s, and Monday should be clear and cool as well, with afternoon temperatures in the low- to mid-60s. After that temperatures will be back on the upswing! 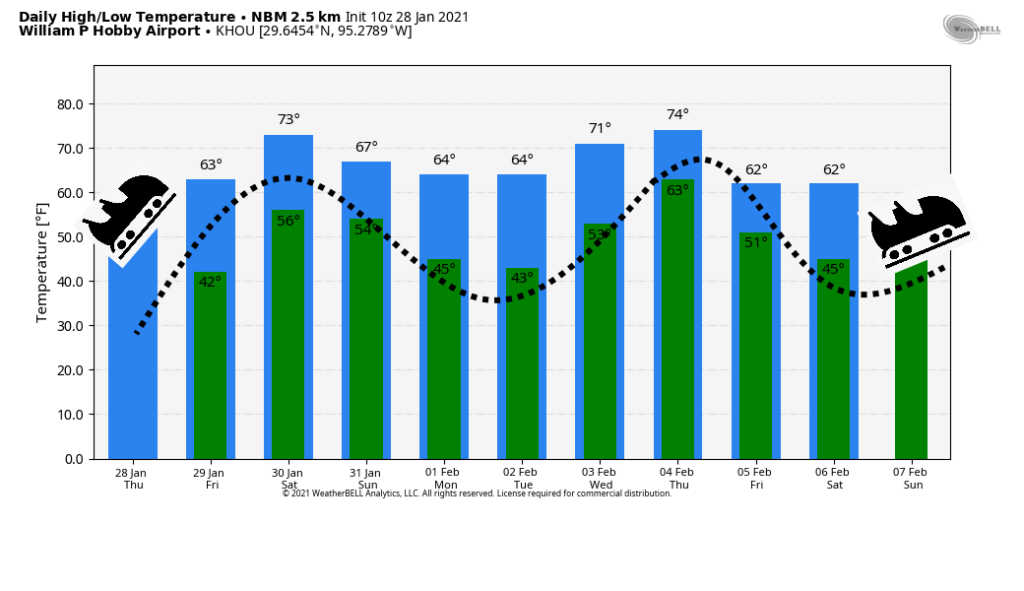 It sure looks like we’ll see a warm-up during the second half of next week, before yet another cold front. This one may, or may not, be pretty strong. (How’s that for helpful!) For now I’d bet on next weekend being fairly cool—but precisely how cold is impossible to say.

Good morning! A second, stronger cold front moved into Houston overnight and this will set the stage for more winter-like conditions through the end of the work week. Then temperatures will begin to rise again this weekend, before the arrival of yet another front. So it goes in Houston, during the winter.

Today will be breezy as the cooler, dry air bulls into Houston behind the front. Expect gusts as high as 20 mph at times, perhaps even a bit stronger right along the coast. Skies should gradually clear out, with highs working themselves into the mid-60s or so for most areas. Winds should gradually subside this evening, as lows drop into the low- to mid-40s in the city of Houston—colder inland, and warmer along the coast. 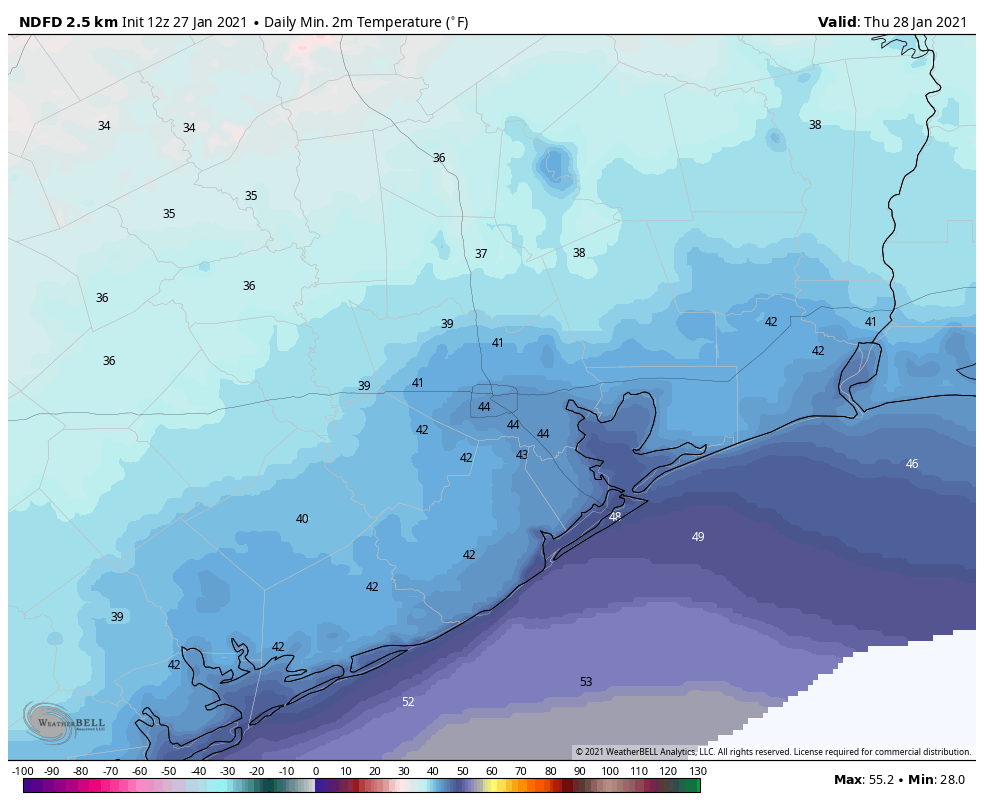 This should be the coldest day of the week. Combined with the cold air, a few clouds may help to limit high temperatures to about 60 degrees. It should be another chilly night, with lows dropping into the mid-40s in Houston.

After dominating our weather for a few days, high pressure should begin to slide off to the east, and this will eventually induce a more southerly flow. However, I think Friday will still see mostly sunny skies, and with its cold start highs probably will only get into the mid-60s. Lows Friday night will be warmer, perhaps dropping into the mid- to upper-50s. 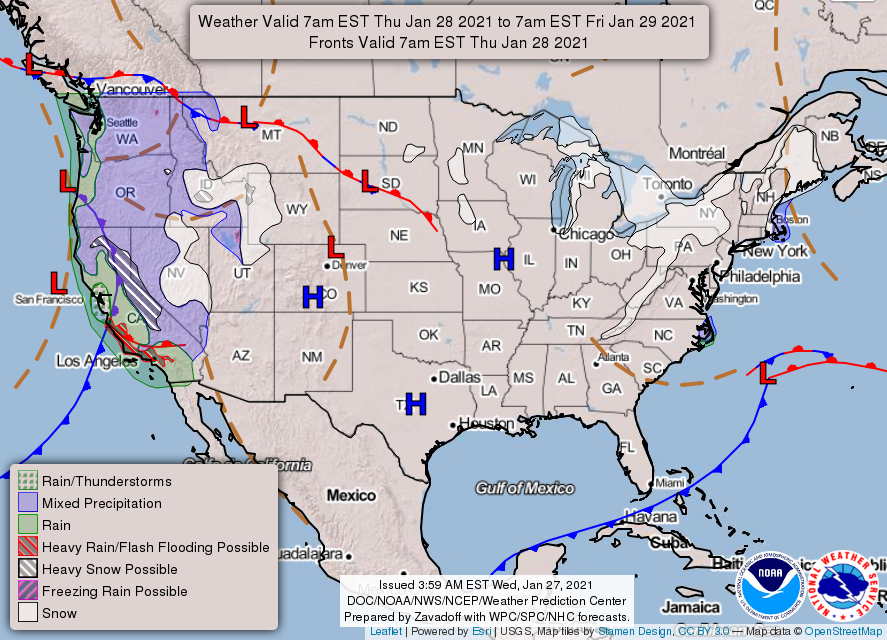 The first half of the weekend will be warmer, with highs somewhere in the 70s, and mostly cloudy skies. As atmospheric moisture levels creep up, rain chances will rise during the afternoon and evening hours, perhaps to 40 or 50 percent. However, any rain that falls on Saturday evening or during the overnight hours will very probably be light, with overall accumulations for most areas likely around one-tenth of an inch. A cold front should push through during the overnight hours, although whether that happens around midnight, or later at sunrise on Sunday, is anyone’s guess right now.

This should be a pleasant, breezy, sunny day with highs of around 70 degrees in the wake of the front. Lows on Sunday night should drop into the 40s for most.

And so it goes during winter. High pressure should dominate through Tuesday, or so, with its attendant sunny skies. Then we’ll be back into a warmer, more humid pattern until the next front arrives. It seems possible that this one—arriving around February 5 or 6—may have more oomph than the last few. Temperatures may flirt with freezing levels again in Houston, although that’s just speculation for now.

Good morning. For the last seven days, temperatures in Houston have averaged 10 to 15 degrees above normal for January, with mostly cloudy skies. Now, following a weak front on Monday, and a stronger one on Wednesday, Houston will return to somewhat more normal conditions for January, with cooler and clearer weather. 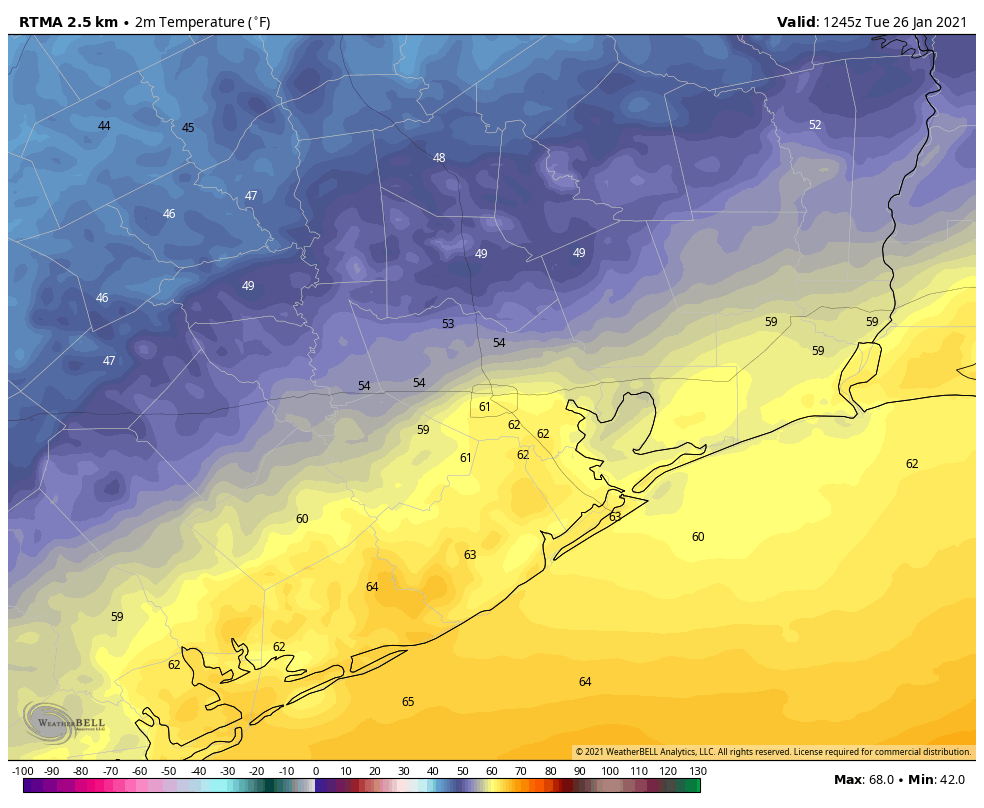 We’re seeing quite a variation in temperatures on Tuesday morning. (Weather Bell)

In the wake of Monday’s front winds are out of the northwest, but our air mass has modified only slowly, especially along the coast. As a result there is a wide variance in temperatures across Houston this morning, ranging from upper 40s for inland areas like Montgomery County, to the low 60s south of the city. This is because Monday’s front is lingering just offshore, and it may also allow for some clouds to form along the coast later today. Highs should get into the upper 60s or low 70s for most today, with winds shifting to come from the east. Overnight lows should drop into the 50s for most.

Another front will push into Houston on Wednesday morning, and this should bring somewhat more drier air. We can’t rule out some very light showers early Wednesday near the coast. However these will end with the front’s passage, and we should be left with a partly to mostly sunny day, with highs in the 60s. Wednesday night should be the coldest of the week, with temperatures dropping down to the low 40s in Houston. 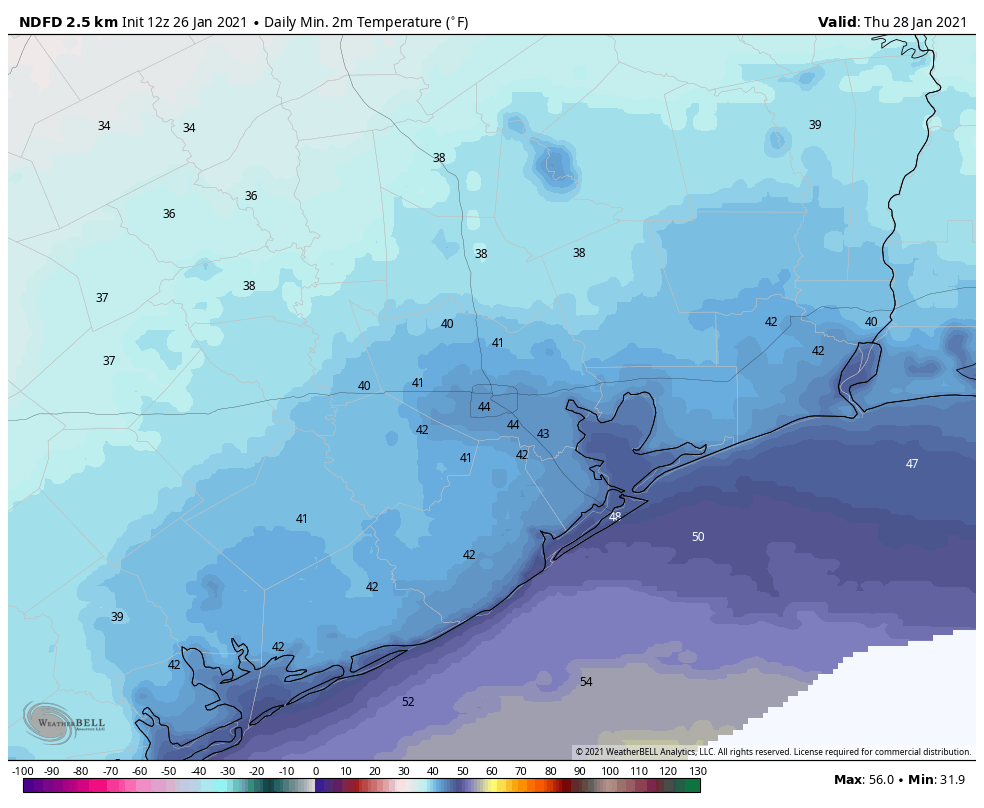 Thursday morning should be the coldest of the week. (Weather Bell)

High pressure will make for a pleasant end to the work week in Houston, with mostly sunny skies predominating. Highs on Thursday may not get much above 60 degrees after the cool start, and Thursday night should again see lows in the 40s. However, by Friday the onshore flow will push highs back into the upper 60s.

The forecast for the weekend is coming into slightly better focus. We expect a warmish and probably cloudy day on Saturday, with high temperatures pushing up into the 70s. A chance of rain enters the forecast later in the day, when another front moves toward the region. Depending on the timing and movement of this front, we’re less confident about Sunday’s weather. Most likely, however, we’ll see partly to mostly sunny skies on Sunday after the front moves through. Monday and Tuesday of next week should see highs in the 60s, and lows in the 40s.

It’s been a gloomy few days here in the Houston area, between overcast skies or fog or showers or drizzle. The bad news is that it continues somewhat today, but the good news is that the end is coming for tomorrow. It won’t be a brilliant, totally sunny week, but it will be a lot nicer than what we’ve had recently.

We have the clouds this morning, but there is definitely less fog around than in some other recent days. Tough to find any location, even at the coast, with less than 5 miles of visibility this morning. 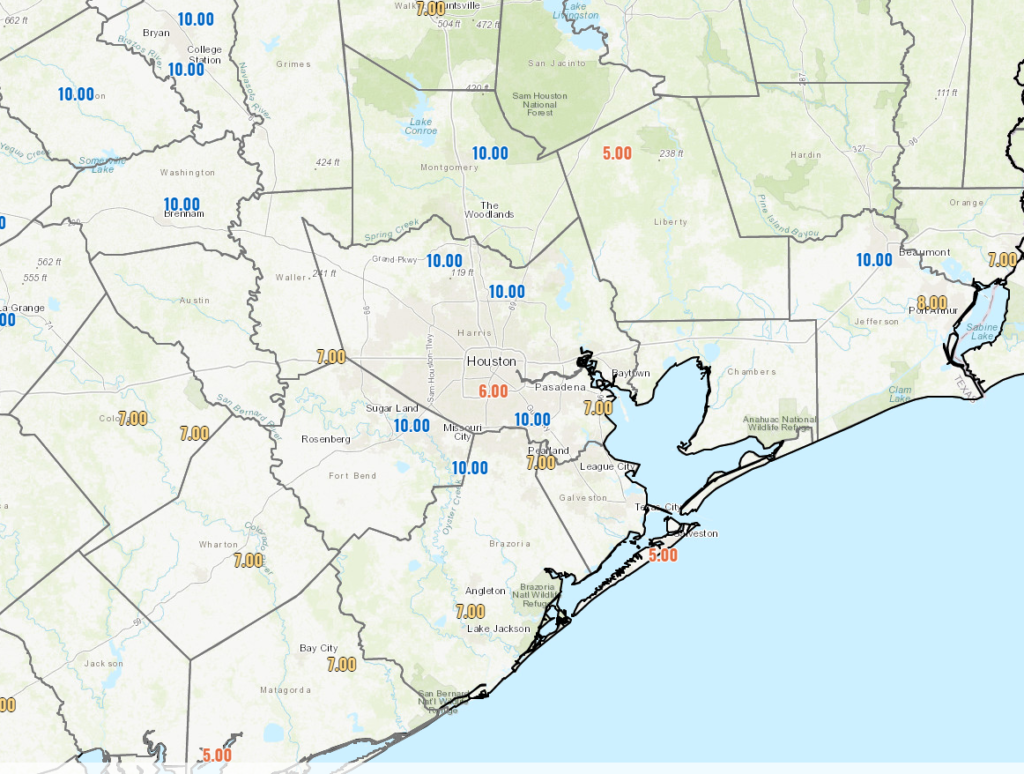 So that’s a good start. There are some showers around this morning already, none of which are particularly heavy, but expect sort of a dreary start to the day, with low clouds and light rain, heavy drizzle, mist, or a shower. A narrow band of slightly heavier showers may try to roll in with the cold front itself, late this morning northwest of Houston and around midday in Houston itself. The front should get to the coast by late afternoon.

You’ll know when the front passes by a wind shift and about a 5 to 10 degree temperature drop. We’ll reach the low-70s north and west of Houston before the front and the mid to upper-70s south and east of Houston. So the change behind today’s won’t be too dramatic initially. 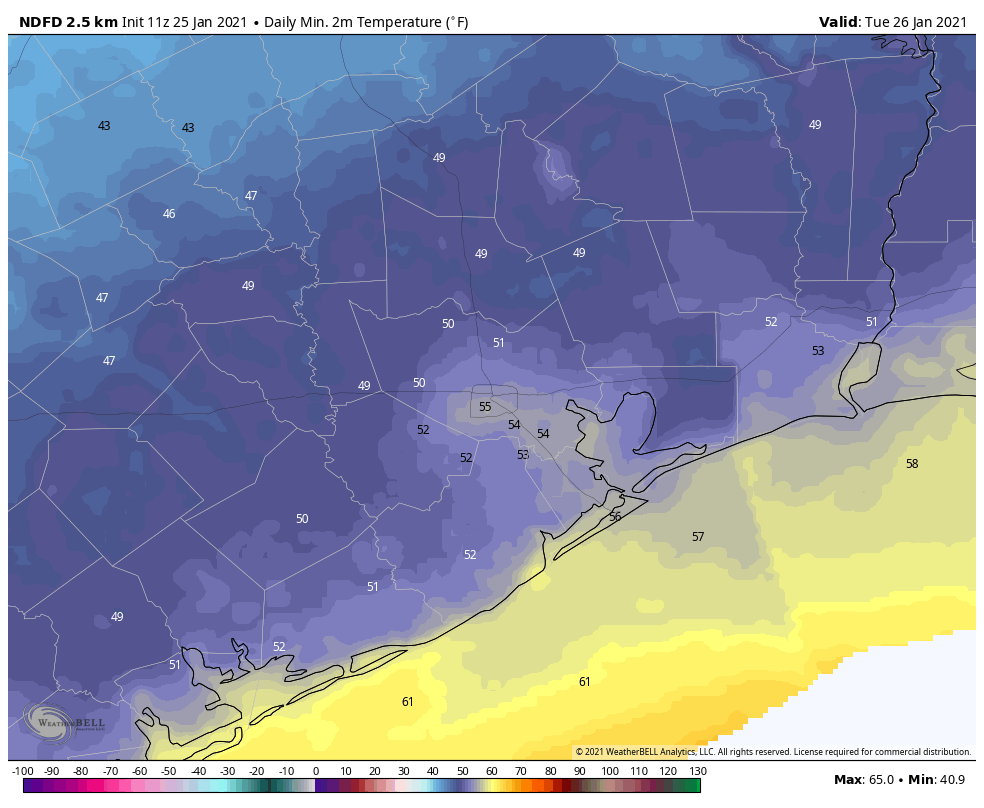 Much cooler morning low temperatures in the upper-40s to low or mid-50s are expected overnight. (Weather Bell)

Where you’ll really notice the change will be tonight, as temperatures drop into the upper-40s to mid-50s for low temperatures by Tuesday morning.

Tomorrow won’t be perfectly sunny, but it will surely be a bit nicer than it has been. Look for a mix of sun and high clouds tomorrow, with high temperatures pushing back close to 70 degrees or a touch warmer.

A second cold front, this one a bit stronger, will push across the region on Wednesday morning. It will probably be a dry front, however. Look for a breezy day, with gusts of 15 to 20 mph out of the north. It will be sunny, but there will be a good deal of high cloud cover likely around at times to dim the sun. This should keep us in the mid to upper-60s for highs, after starting the day in the low to mid-50s.

Expect more high clouds on Thursday, along with some sunshine. Friday may see the high clouds disappear, and it will likely start off sunny before some lower clouds roll in later in the day as onshore flow returns. Low temperatures for Thursday and Friday morning will likely average in the low 40s, though it will probably be in the upper-30s north and maybe upper-40s southeast of the city along the coast. For the daytime, expect cool upper-50s to low-60s on Thursday, followed up by mid-60s on Friday.

It’s a bit early to say too much about this coming weekend, but it appears somewhat similar to this past weekend, with a good deal of low clouds, perhaps some patchy fog, and at least some shower chances, albeit low ones right now. We may see a cold front swing through the area by Sunday morning or afternoon, however, which could clear us out a bit and yield a nicer Sunday. Temperatures will be warm, with 70s for highs and 50s or 60s for lows. We should be back in the 40s on Monday morning behind the front, however.