After Monday’s superb weather—seriously, was that the nicest day of 2019 so far?—we’re going to return to a more May-like pattern with increasing humidity and warmer temperatures for the rest of the week. We still have some concerns about the potential for storms this weekend, but as for now it appears like the more severe weather will remain north and west of Houston.

It is warmer across the Houston area this morning, with lows generally down around 70 degrees in the city, and a few degrees cooler up north. With partly sunny skies later this afternoon, we can expect high temperatures to reach the mid-80s. We will see some slight rain chances in Houston, perhaps 20 percent or so, with the best potential to the southwest of the region over Matagorda, Wharton, and Colorado counties. Accumulations should be less than a tenth of an inch, or two. 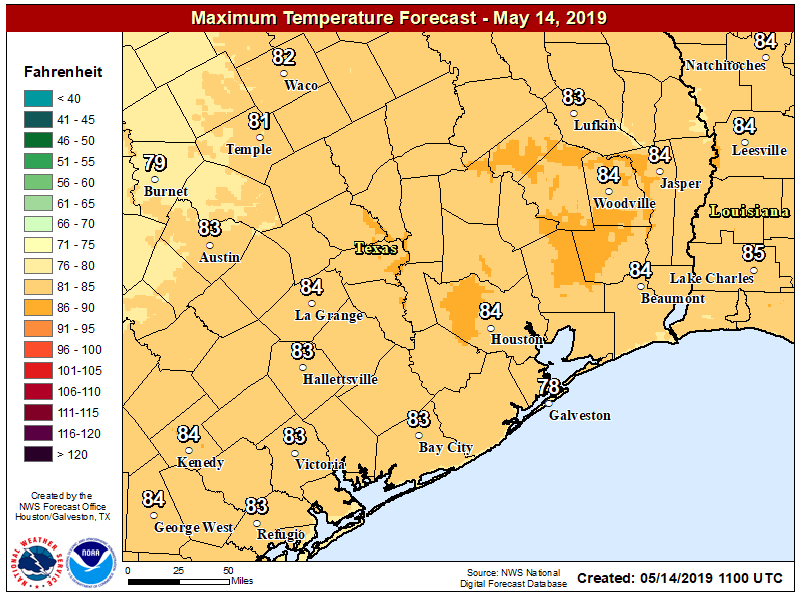 Temperatures Tuesday will be typical of May in Houston. (National Weather Service)

These should be a similar days to Tuesday, with low, but non-zero rain chances. Temperatures will be on the upswing, with highs in the mid, and possibly upper-80s by Thursday. Overnight lows will remain decent for mid-May, likely dropping to around 70 degrees in the city of Houston.

Highs in the mid- to upper-80s, with increasing rain chances as pressures fall a bit. I’d still not expect rain chances much above 30 percent.

Friday looks to be an active day across the plains states. (NOAA)

Storms will be on the march across the plains states on Friday and Saturday, bringing a healthy chance of severe weather—Friday especially looks like a big day for the Panhandle and parts of Oklahoma if you’re headed that way. For now, it appears as though most of the severity associated with these storms will stay north of Houston, but we’re still expecting some light to moderate rain in Houston, and certainly can’t yet rule out some stronger thunderstorms. I’d peg accumulations at 0.25 to 1.0 inch of rain for most of the Houston metro area.

Highs both days should be in the mid-80s, with partly sunny skies. Most likely timing for rain appears to be from later Saturday afternoon through Sunday morning, but overall confidence remains fairly low.

After this weekend, high pressure settles in, and this should result in a more summer-like pattern. Forecast models are hinting at one or more 90-degree days, so if you’ve been wondering when it’s going to get Houston hot, next week may feel like the true onset of summer.

7 thoughts on “Expect a typical May week, with a chance for showers this weekend”