If you missed it, Eric and I have decided to start doing tropical updates for you every week or two through hurricane season. We had our first one last week, which was rather detailed. This week, we’ll be a little more succinct!

The Atlantic basin continues to be void of much interesting tropical activity, and it will likely continue that way for the next week to 10 days.

Dust, dust, dust. And shear. Those two things are characterizing the Atlantic basin today. Dust from the Sahara Desert continues to roar across the Atlantic. This tends to be a fairly common feature in the early parts of hurricane season. We’ve noticed it a lot more in recent years, and I’m not sure if that’s because of some functional change or just because our observational capabilities have gotten so much more sophisticated. Either way, the last few years have seen a lot of Saharan dust in the basin in June and July. 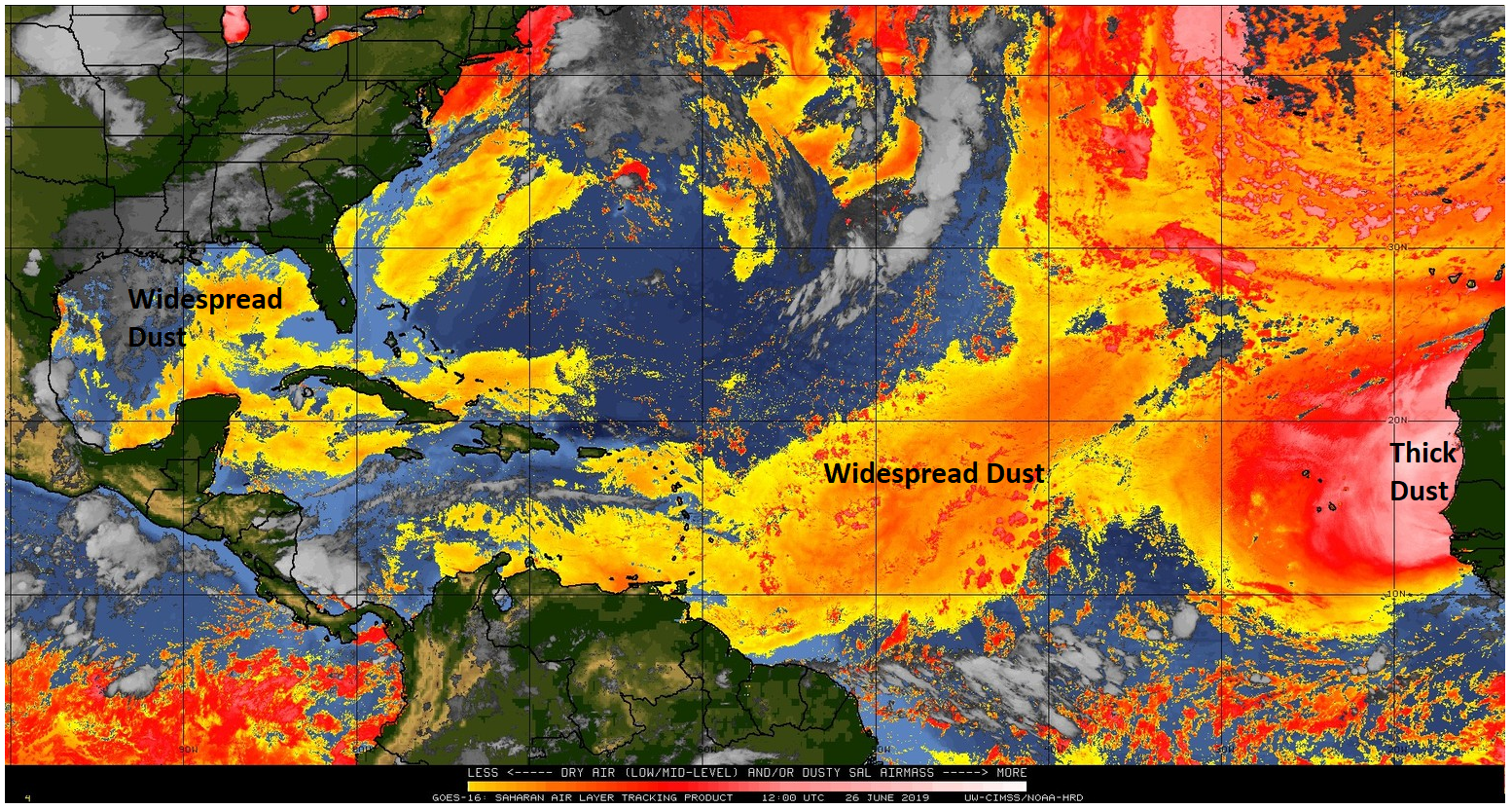 Widespread Saharan dust is spread out across virtually the entire Atlantic basin right now, which should help limit tropical activity for a little while longer. (University of Wisconsin/NOAA)

From the satellite image above, you can see where dust (yellow/orange/red) is located, as well as cloud cover (gray). Virtually the entire Atlantic basin is littered with Saharan dust right now. This includes the Gulf of Mexico. Some of that thicker dust is likely to appear in Houston’s skies in the days ahead.

Why does this matter? Well, Saharan dust is extremely important globally. It’s a major source of nutrients for phytoplankton, and it helps to fertilize the Amazon. It obviously doesn’t come without problems, as the dust can irritate those who have sensitive respiratory systems, allergies, or asthma. It reduces air quality, and we may well see that here in Houston for late this week.

But from a tropical point of view, Saharan dust can help hinder systems from developing. The dust is indicative of dry air in the atmosphere. Obviously, hurricanes need moist air. Think about our weather here in Houston. On days with a “cap” in the atmosphere, there’s a barrier that exists preventing or limiting how high cloud tops can go. That reduces our thunderstorm chances. The Saharan air layer can act as a “cap” as well, preventing storms from billowing up. It doesn’t entirely prevent tropical storms or hurricanes from developing, but it can severely limit how well developed they can become. So curse the dust when it irritates your sinuses, but thank it for helping to keep the early part of tropical season under wraps.

In addition to Saharan dust, the tropical Atlantic is mostly being smothered with wind shear right now as well.

Anywhere you see red on the map above, it indicates high wind shear values, which would usually act to prevent storms from organizing. (University of Wisconsin)

Anywhere you see red on the map above, it indicates high wind shear. Right now, that includes the Gulf, the Caribbean, and most of the tropical Atlantic. Wind shear acts to prevent thunderstorms from organizing and beginning to swirl. It can rip organized storms apart. High wind shear typically means limited tropical activity.

Between the high shear and high quantities of dust in the Atlantic basin right now, it will be tough for anything to organize for at least the next seven to ten days.

Looking way out in time, neither the GFS model, the European model, or any of their ensemble members show any meaningful activity in the Atlantic basin over the next 14 days. They do show a bit of an increase in “noise” in the Eastern Pacific, but as of yet, that does not translate into the Atlantic.

Most of my thoughts from last week’s post hold today. I do think we will see something develop by mid-July, but I am a bit less confident in that today than I was a week ago. I explained a lot of this in last week’s post, so I’ll just direct you to that to understand more about the MJO and how it can impact tropical activity. At a very high level: The passage of an MJO wave can help “prime” the tropics for increased activity during hurricane season.

What has changed since last week? Perhaps the MJO movement has slowed a bit and also weakened a bit, which is mostly good news if you don’t want to see tropical activity. 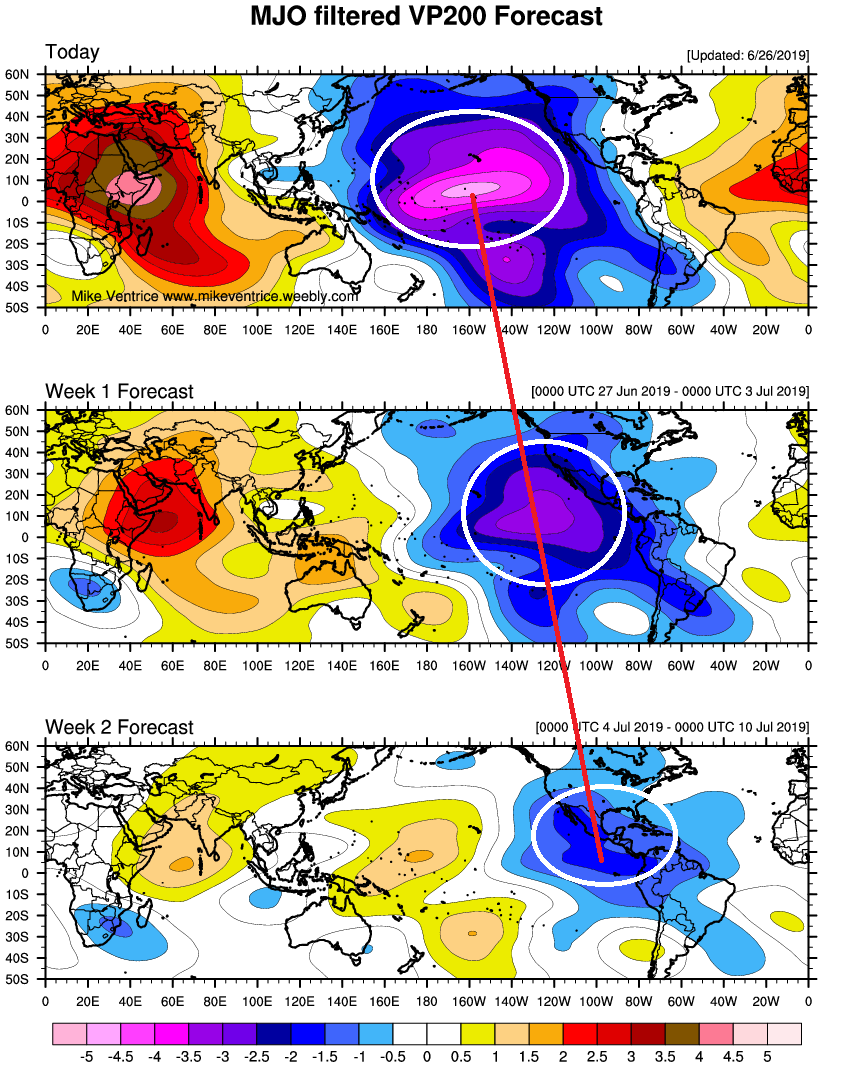 The MJO wave we discussed last week has slowed a bit, meaning it will arrive in the Atlantic a bit later than expected. It also may be a bit weaker too, which could limit tropical activity. (mikeventrice.weebly.com)

If you notice the plot above, the MJO wave is focused on the Central and Eastern Pacific over the next 7 days. That arrives in Central America, in a weakened state around July 10th. This is running about four or five days slower than when we posted last week. It’s also weaker looking, which could limit how much impact it has on tropical activity in the Atlantic. These are the perils of using one specific variable like the MJO when making a long-range forecast.

So, to summarize the tropical outlook right now: Dust and shear will limit activity in the near-term. We still expect conditions to become more favorable through July, perhaps by mid-July for some activity to increase, but confidence in that is fairly low at this time.