Good morning. It’s another muggy and warm morning across Houston, but change is definitely coming.

We’ll see slight rain chances through the early afternoon hours and temperatures rising to near 80 degrees. As a cold front approaches storms will be possible this evening and during the overnight hours. NOAA’s Storm Prediction Center has placed the region under a “slight” chance for severe weather. This means, in addition to thunderstorms, there’s the potential for strong winds and hail. Although most areas probably won’t see weather all that severe, it’s something to take into account for any plans tonight. 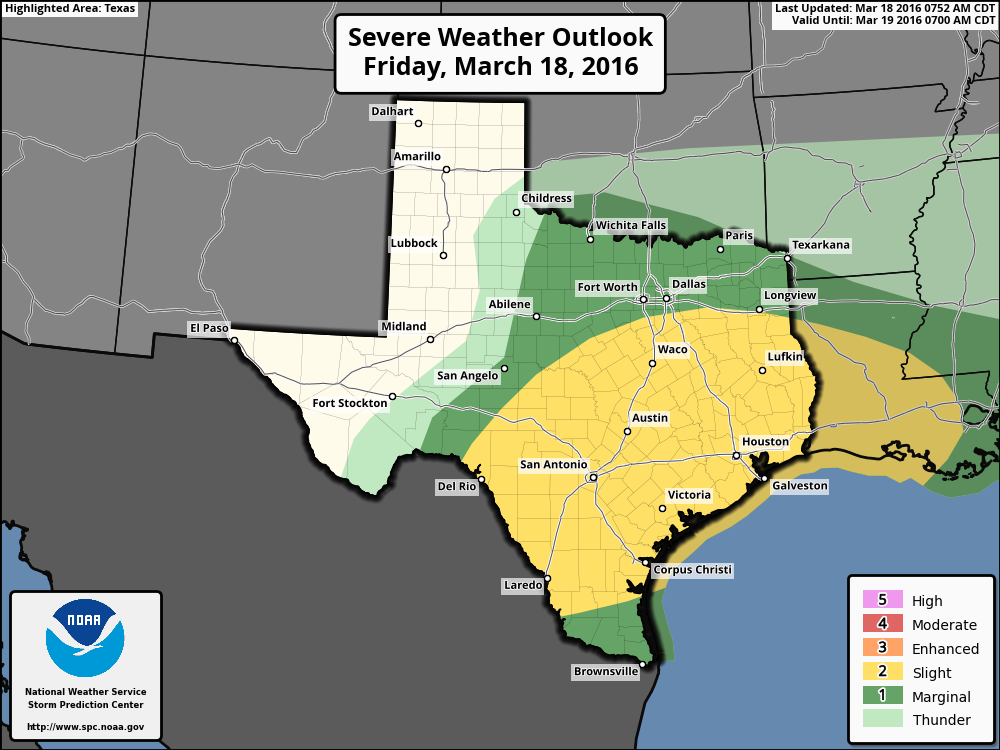 END_OF_DOCUMENT_TOKEN_TO_BE_REPLACED

It’s very humid this morning with relative humidity above 90 percent in may areas. It seems too early for low temperatures to only fall into the upper 60s, but such is life I suppose.

We’re going to remain in this stagnant, humid pattern today and Friday, but with the added possibility of rain showers. There’s a lot of moisture in the atmosphere right now, but it’s going to be difficult to time when the rain occurs. My best guess is that we will see some scattered light to moderate rain later this afternoon and evening across the Houston area that coincides with daytime heating. Temperatures will climb to about 80 degrees.

There’s a better chance of rain on Friday, especially later in the day. High resolution forecast models show a break in shower activity during the morning hours, but with all the moisture in the atmosphere that’s hard to say for sure. What does seem likely is that heavier rain showers are unlikely to develop before Friday evening, and then may occur during the overnight hours. I do not anticipate more than 1 inch for most areas locally, but some isolated areas could see 2 to 3 inches.

END_OF_DOCUMENT_TOKEN_TO_BE_REPLACED

One might very well be asking that question about the winter we just experienced in Houston, when we had precisely two official freezes as the mercury dropped to 32 degrees on Jan. 11th and the 28th. And this was supposed to be a colder winter. During an El Niño winter, and this was an especially strong El Niño, typically the greater Houston region sees slightly cooler and somewhat more wetter conditions than normal.

The most noticeable thing about this winter has definitely been the temperature. We just haven’t had that many cold nights. And it’s not that we’ve seen exceptionally warm temperatures (for example, none of the months from November through February ranked among the top 10 warmest in Houston), we’ve just been consistently warmer than normal.

The effect of this has been that Houston and Texas, like much of the rest of the United States, has been quite a bit warmer than normal. Overall, Texas had its 114th warmest December-February period out of 121 years, according to NOAA data.

END_OF_DOCUMENT_TOKEN_TO_BE_REPLACED

Good morning. Inland areas are seeing some drier air this morning, but if you’re closer to the coast, sorry, it’s still muggy.

A weak cool front has edged into the Houston area and largely stalled out. If we take a look at the GFS model forecast for relative humidity at 6 a.m. CT today we can get a good sense of where this boundary has gotten hung up. 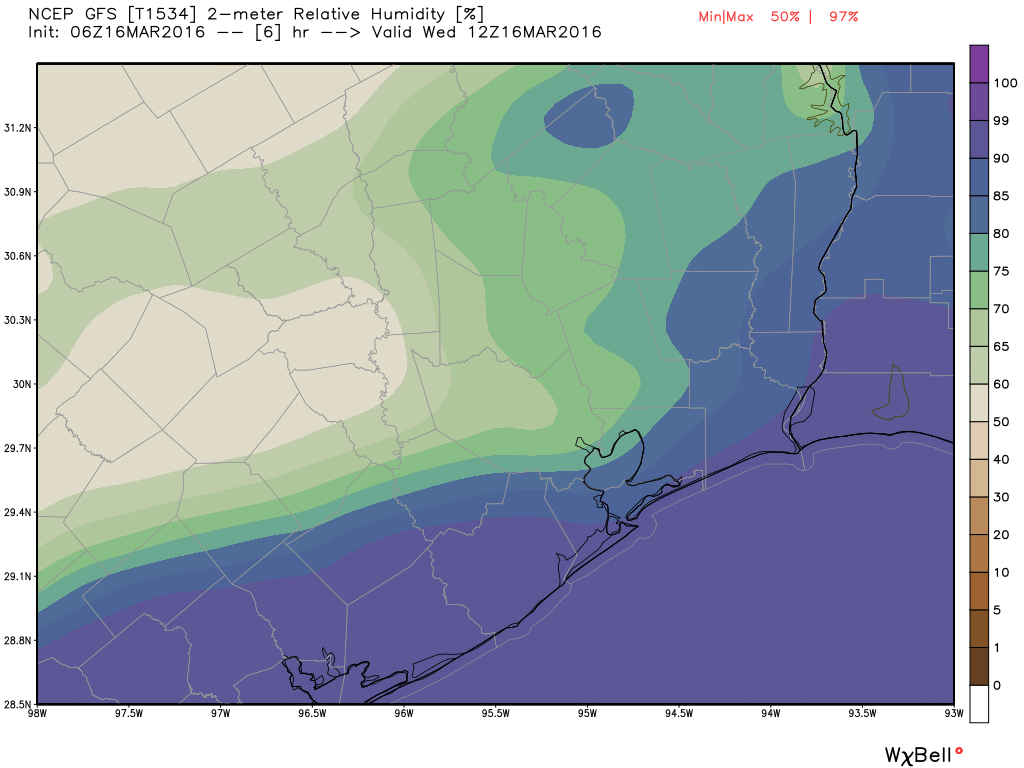 The stalled front, which will probably move back inland tonight, means we have a couple of more partly sunny, muggy and warm days in the 80s. Lows won’t go below the mid-60s. And with the increasing moisture levels there’s a slight chance for some light rain.