As we approach the beginning of August we’re about to begin the most active period of the Atlantic hurricane season. This is because low pressure systems start to move off the African coast and into the eastern Atlantic ocean, into what is known as the “main development region.”

And right on cue, the Atlantic is delivering, with a large low that has developed into a tropical wave just off the coast of Africa. According to the National Hurricane Center this system has a 40 percent chance of becoming a tropical depression or storm during the next five days. 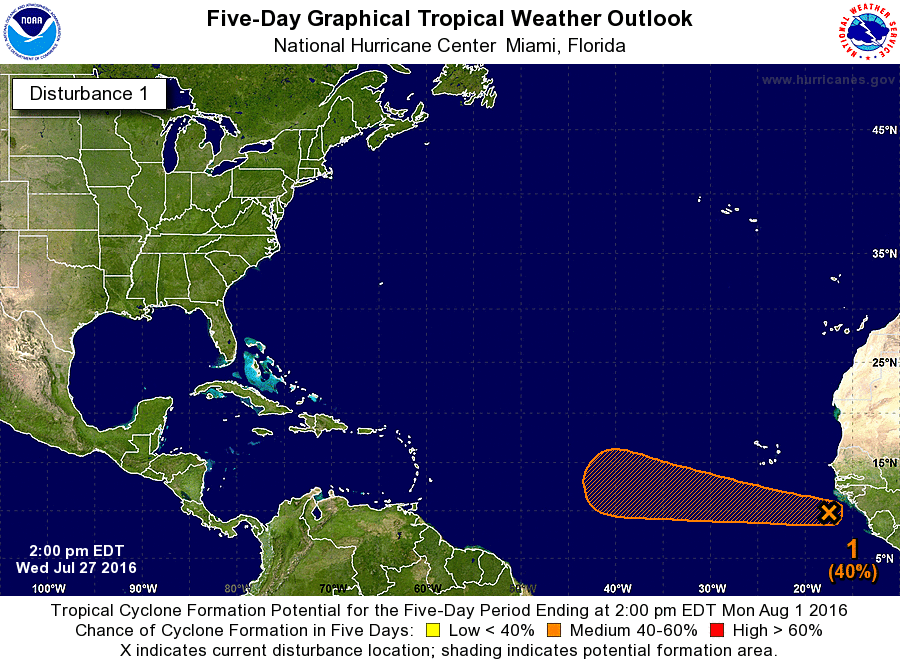 The 1pm CT, Wednesday, advisory from the National Hurricane Center.

END_OF_DOCUMENT_TOKEN_TO_BE_REPLACED

The last 48 hours have brought some welcome change to Houston’s hot and (mostly) rain free summer as Gulf of Mexico moisture has surged into the region amid a weakness in high pressure. Those conditions will more or less remain the same today, with one key difference.

So far the heaviest rains have been more clustered over the southern half of the metro area, in places like Fort Bend, Galveston and southern Harris counties. Although we’re likely to see some coastal rains again today, there’s a better chance of development further inland later this afternoon. 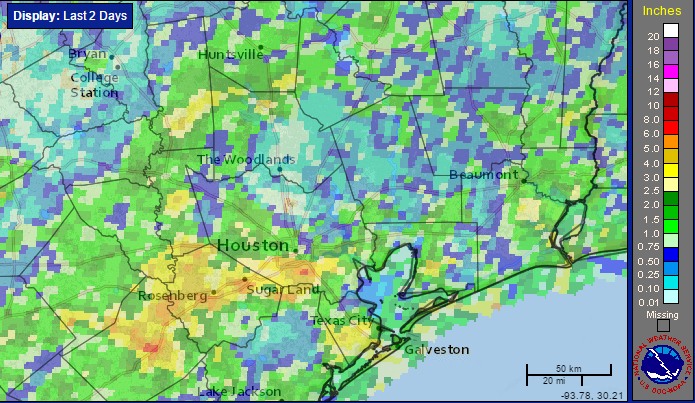 Accumulated rainfall for Houston from 5am Monday through 5am Wednesday. (NOAA)

END_OF_DOCUMENT_TOKEN_TO_BE_REPLACED

Good morning. After a wet Monday brought as much as 3 inches of rain to some of the Houston metro area (see map below), it looks like we’re in for part two today, with lowering rain chances through the rest of the week. 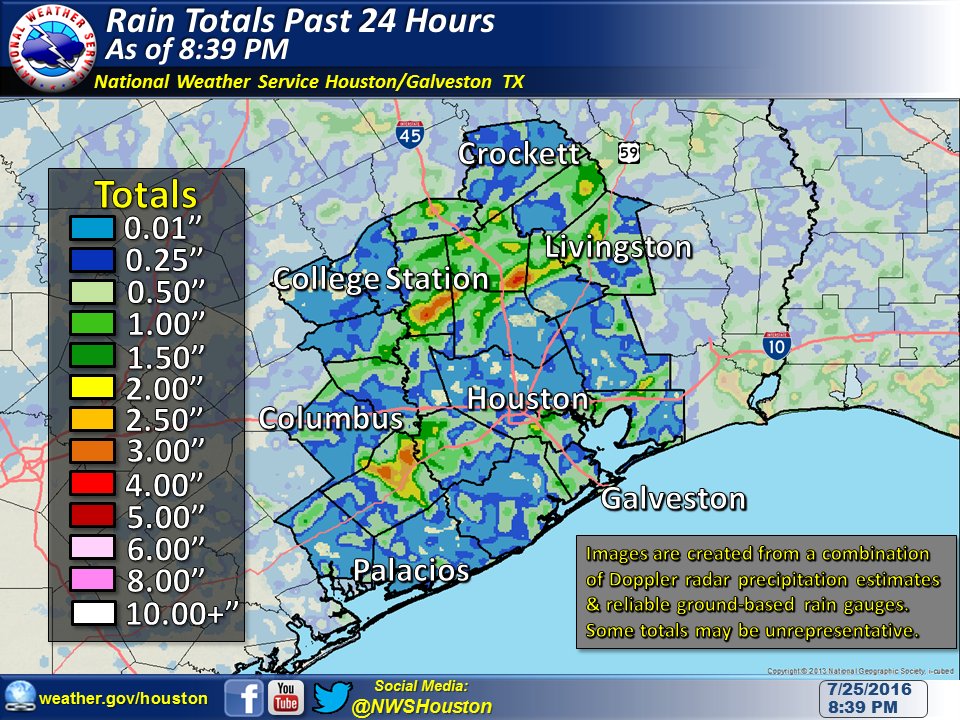 The upshot of this is that the region could really use the rain after a very dry month of July.

As of 6:15am CT rain showers have spread over most of the western metro area, south of Interstate 10. Northwestern Fort Bend County is already under a flood advisory for minor street flooding due to these rains, and there may be some delays along low-lying roads.

It looks like the greatest amount of moisture today will be closer to the coast, leading to greater rain chances for those areas, and less further inland, for Montgomery County and to the northwest of Houston. Additionally there is enough moisture to produce some locally heavy rainfall, although I am not expecting any significant problems. Overall I am expecting a day similar to Monday—with some areas receiving 2-3 inches of rain, and other areas getting perhaps a tenth of an inch. On Monday the rains didn’t start until later in the day so high temperatures still had a chance to rise into the upper 90s for most areas. Today, with earlier rains, I expect highs to remain confined to the low 90s.

Click to enlarge. This image shows precipitable water value forecasts for today, Wednesday and Thursday. Note the decline in available moisture for rainfall.

END_OF_DOCUMENT_TOKEN_TO_BE_REPLACED

After two consecutive 100-degree days are you ready for a bit of a reprieve? I thought so. And fortunately, cooler and especially wetter weather is at hand. Change is coming.

Much of the area is likely to see rain showers today, Tuesday—or both. We’re seeing increased atmospheric moisture levels in combination with some lower pressure that should lead to much-needed rain. The most likely time for showers is after about 1pm through the late afternoon hours. 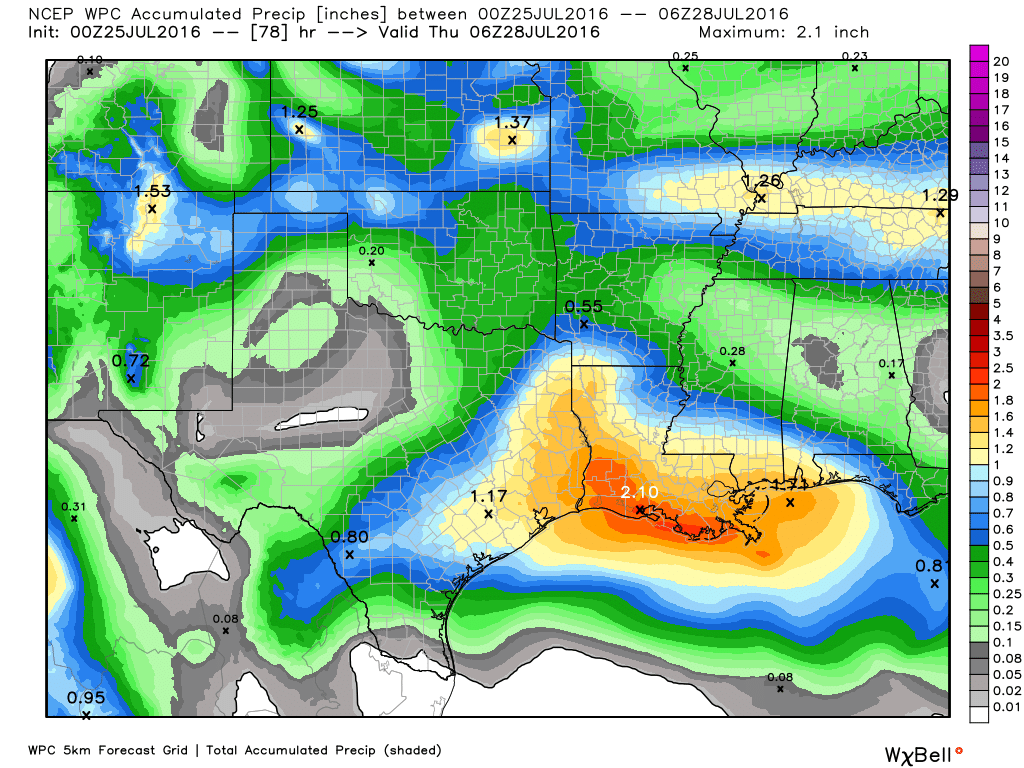 Although with these moisture levels we can’t rule out some locally heavy rainfall, with rates of 2-3 inches per hour, conditions aren’t going to be ideal for these kinds of deluges. As a guess I’d say most of the area will receive about 1 inch of rain, plus or minus, over the next two days. High temperatures, accordingly, should only rise into the low 90s.