Last night Matt provided a solid overview of the reasoning behind Houston’s flash flood watch for Wednesday, and truthfully not much has changed. Wednesday and (especially, we think) Wednesday night have the potential for widespread, heavy rainfall with possibly some severe thunderstorms. We’re not expecting anything too extreme, rain-wise, but some street flooding is possible later tonight.

The big question for today is timing. As of about 7am, a fairly robust line of strong rain showers extends along a line almost half way between San Antonio at Houston. It’s not clear when the bulk of the rainfall will arrive. It could be as early as just before noon for western parts of the city, but not until afternoon, or even evening for most of the city. (Note: If you haven’t seen much or any rain by sunset, it doesn’t mean that the forecast is a bust, or the rain “missed” us. Hold on.) We’ll be watching closely, and update this site as necessary. Highs today should reach about 80 degrees under mostly cloudy skies. 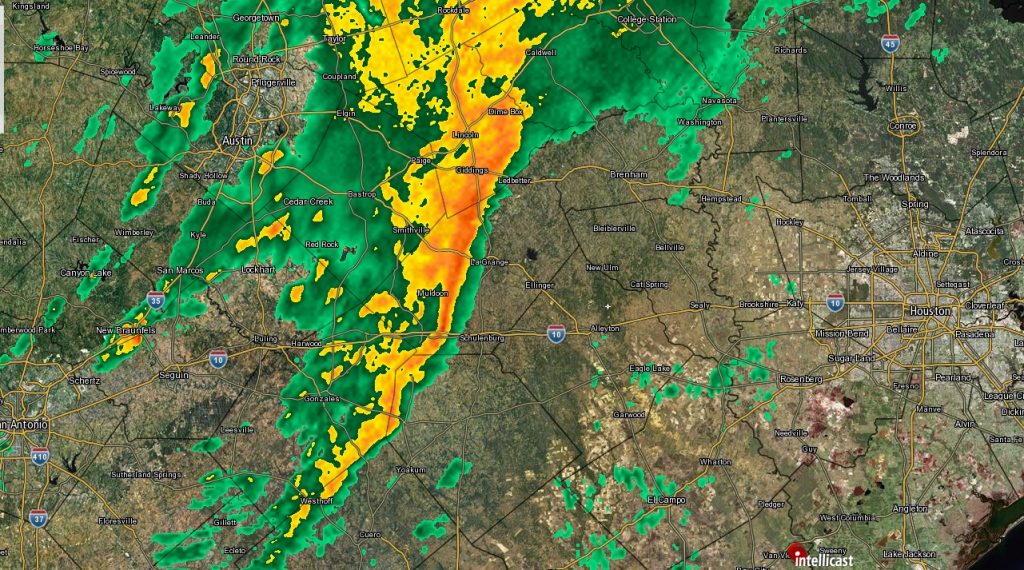 Radar as of 6:55am CT on Wednesday. Click to enlarge. (Intellicast)

Sometime later tonight, probably about 9 to 11 pm, the forecast models move a boundary into the Houston region, and this should serve as a focusing point for heavy rainfall between that point and perhaps 2 to 4am on Thursday morning. This is the period during which we think the heaviest rain showers will move into Houston, along with the potential for some inclement weather like hail. Most of the area will probably see 1 to 3 inches of rain, but depending on where this boundary sets up—perhaps along the US-59 corridor, perhaps closer to the coast—we could see higher amounts than this. Either way, if you’re a light sleeper, thunder and lightning will probably wake you at some point tonight. 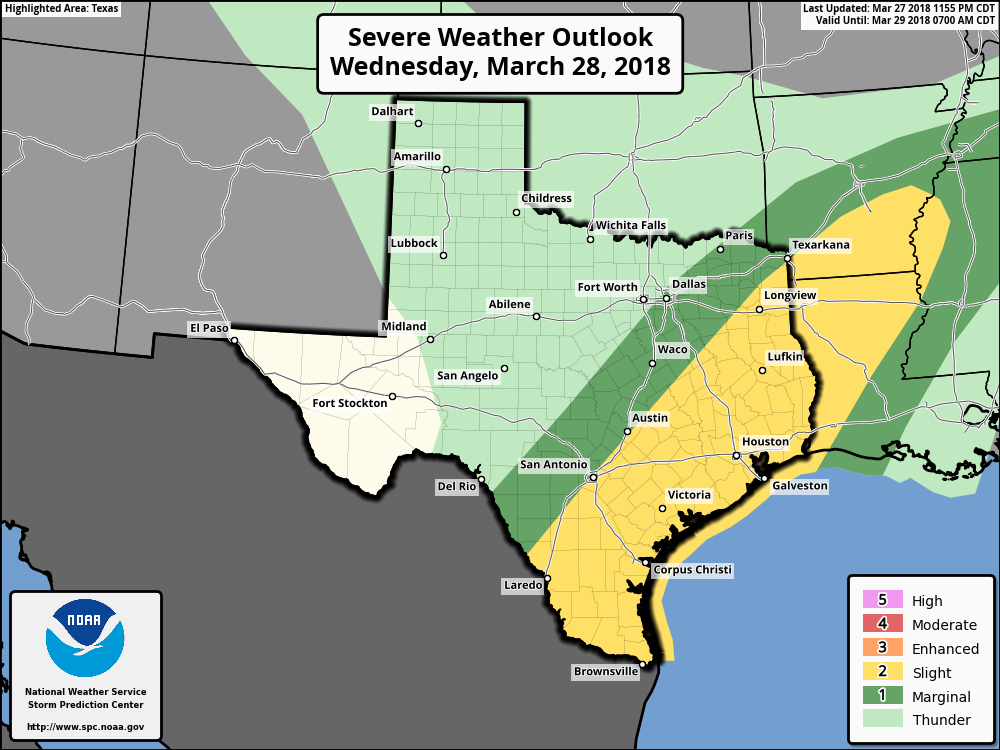 END_OF_DOCUMENT_TOKEN_TO_BE_REPLACED

Good evening all. We wanted to give you an evening update on the incoming rain event for Wednesday. Truthfully, not much has changed from Eric’s synopsis and outlook this morning. But we want to freshen up some thoughts around timing, amounts, severe weather, and so forth.

The National Weather Service has posted a Flash Flood Watch for almost the entire region (Edit to add: As of 8 PM, only Jackson & Matagorda Counties are excluded from the watch). The watch begins at 1 AM for areas north and west of Houston and at 7 AM for Houston and points south and east. 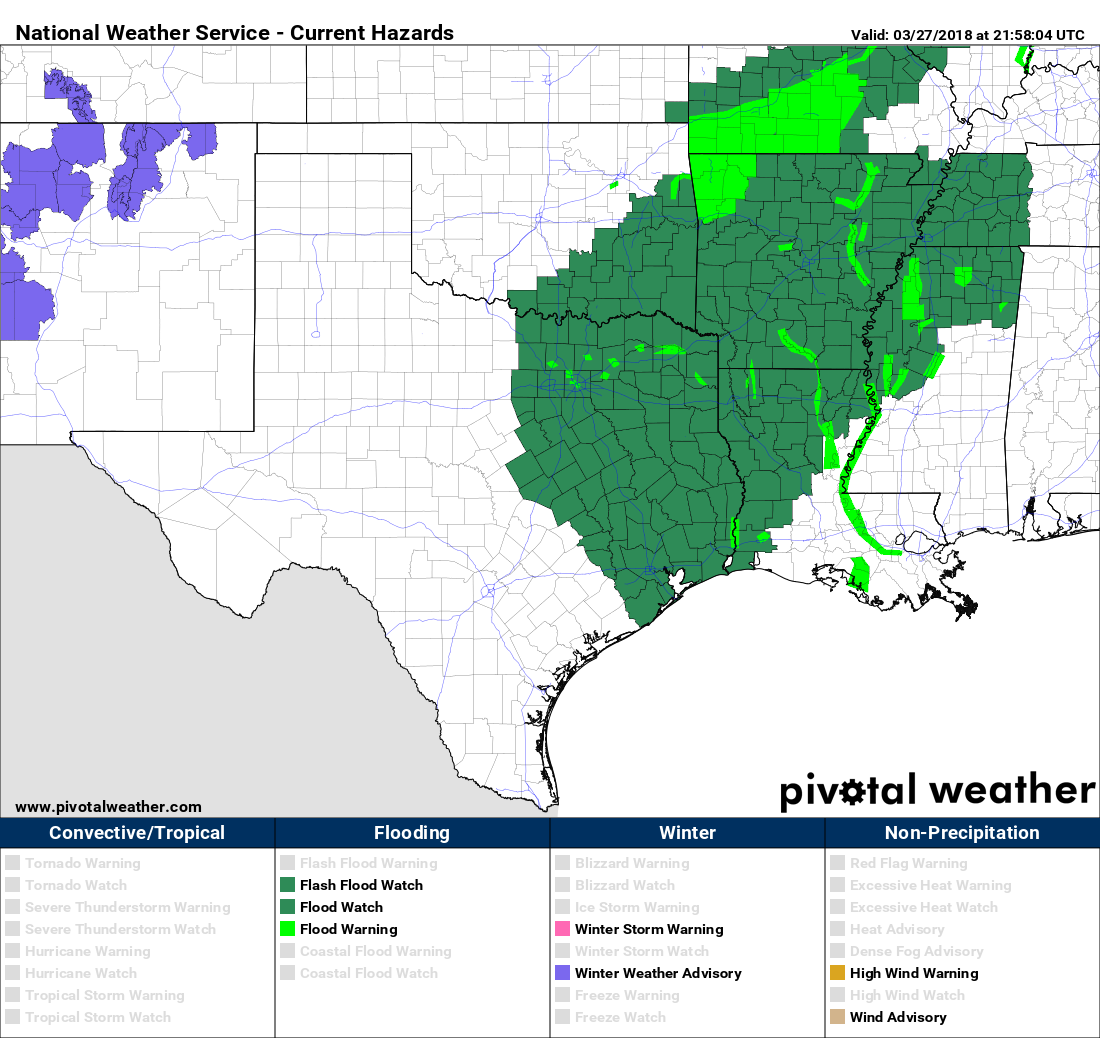 A large area of flash flood watches extends from just west of Houston all the way into the Mississippi Valley. (Pivotal Weather/NWS)

This is the one that I think might throw some folks for a loop. Much of Wednesday in Houston will actually be a lot like today. We do expect heavier rains in the morning northwest of the Houston metro area (up toward College Station, perhaps drifting as far south and east as Sealy through The Woodlands, which is why the flash flood watch begins at 1 AM there and not in Houston). But isolated showers and maybe a downpour with heavier rain well northwest should be the M.O. through early afternoon Wednesday.

We then have two parts to the stormy weather show. Part one is from early afternoon through early evening, when we’ll watch for scattered strong to severe thunderstorms. Not everyone will see rain, but if you do, it could be heavy. More on the severe weather threat below. Part two will be the main event tomorrow night. The cold front will be ushered slowly southeast from about 10 PM through 3-4 AM Thursday by a vigorous upper level disturbance. Look for the majority of tomorrow’s rain to fall from early evening into the early overnight.

END_OF_DOCUMENT_TOKEN_TO_BE_REPLACED

The weather story for this week continues to be the potential for heavy rainfall late tonight through Thursday morning, with subsequently clearing skies and really quite nice weather for Easter weekend. Let’s jump into the timing for this week’s storms.

Temperatures are very warm this morning for late March, with lows only dropping into the low 70s. Even with mostly cloudy skies, we can expect high temperatures today to rise into the lower 80s. And while there will probably be some scattered showers later this afternoon, I think we’re probably going to have to wait until Tuesday night for the heavier rain to begin.

A slow-moving cold front will be part of a large area of disturbed weather moving toward the greater Houston area tonight, and right now it appears as though any heavier showers probably won’t reach the metro region until after midnight. The general expectation remains 1 to 3 inches of rainfall for most people, with isolated, higher totals possible through the day on Wednesday. 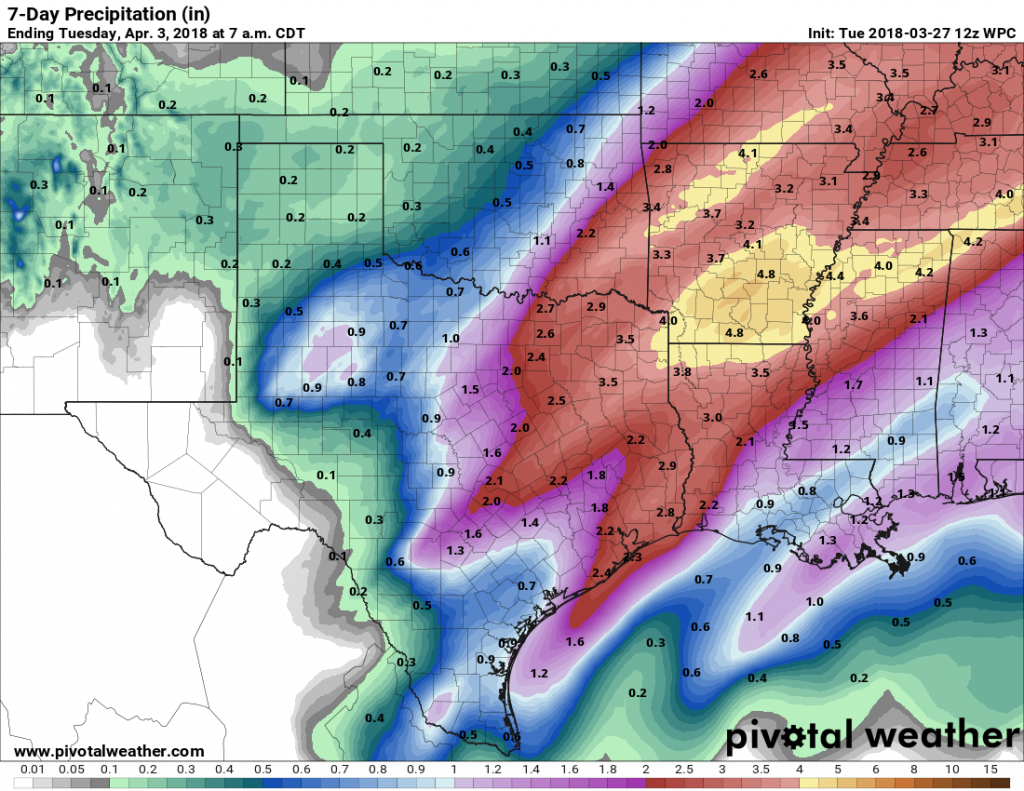 END_OF_DOCUMENT_TOKEN_TO_BE_REPLACED

Except for a few areas of Fort Bend and Brazoria County, the greater Houston area is not under a drought—or even abnormally dry—and yet much of the area has begun to accrue a rain deficit for 2018. For example Hobby Airport, a good marker for central Houston, has received less than one-half inch of rain in March. And with extremely heavy levels of tree pollen still around, we could use a good shower (or two) to knock the pollen out of the air and wash it away. Well, that’s what is coming this week. 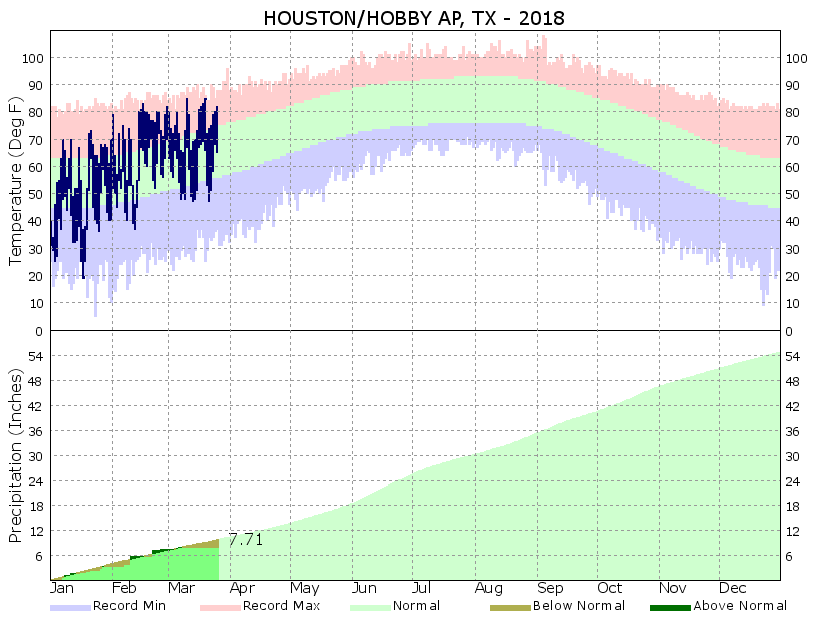 Hobby Airport has a rainfall deficit of 1.5 inches the end of March. (National Weather Service)

Monday will probably end up being similar to Sunday temperature-wise, although there will be a few more clouds, some slight rain chances, and some gusty southerly winds. Most people probably won’t see rain, but the breezes will definitely be felt as winds gust into the mid-20s. Highs in the low 80s.