I can remember this morning, from a year ago, with crystal clarity. The Houston region had just seen its most intense night of rainfall, ever, as three major bands of rainfall swept across the city and flooded everything. Conditions grew so dire that the National Weather Service essentially invented a new warning to characterize flooding across the region, declaring a “Flash Flood Emergency for Catastrophic Life Threatening Flooding.” And it had only just begun, with the Houston region facing three more days of heavy rainfall. 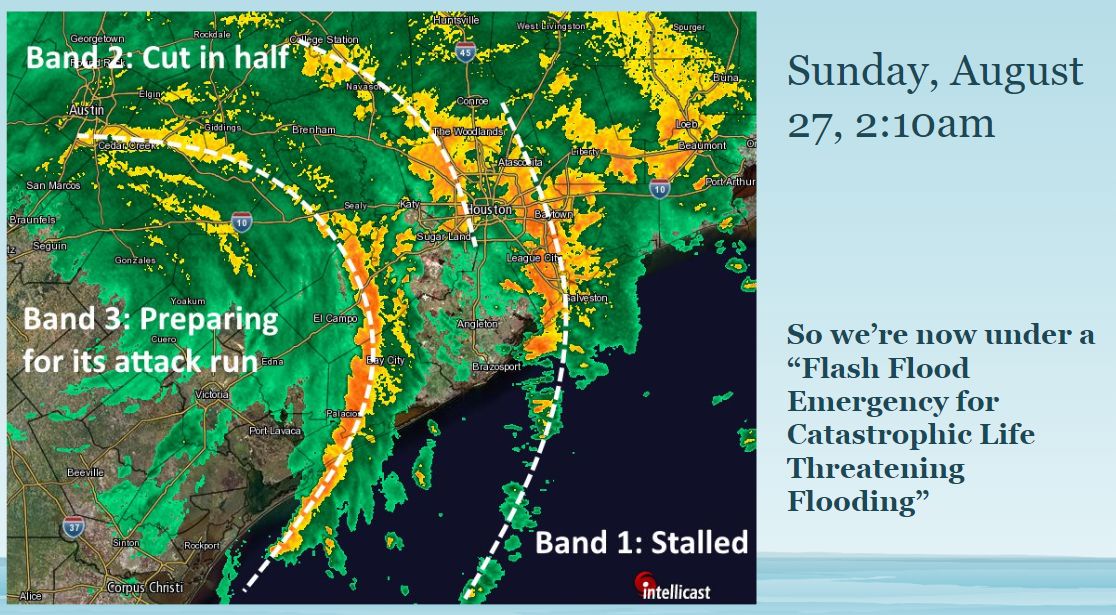 On this anniversary of Harvey, I invite you to share your memories with the Harvey Memories Project, a partnership between Rice University and local libraries. The goal is to create a digital archive of photos, short video, and audio of Harvey experiences. Local health researchers are also collecting information about the health, housing, and vehicle damage from Hurricane Harvey, and you’re encouraged to participate in this survey. Now, onto the forecast.

We’re in the midst of a pattern shift, as the high pressure that dominated Houston’s weather last week moves away from the region. This will lead to better rain chances this week, although perhaps not right away. Rain accumulations will generally be better for central and coastal parts of the region, rather than areas to the northwest, but overall most people should pick up some much needed precipitation this week.

For Monday and Tuesday, we’re probably going to seen only isolated to scattered rain chances, with 20 to 30 percent of the area seeing showers. High temperatures will depend on the extent of localized cloud cover, but probably will range from about 90 degrees to the upper-90s for areas that see full sunshine.

END_OF_DOCUMENT_TOKEN_TO_BE_REPLACED

Temperatures peaked in the middle 90s on Thursday, as we saw a little more morning cloud cover and a lot of haze than in prior days. Incidentally, the haze isn’t Saharan dust for a change. It is actually courtesy of the wildfires you’ve likely heard about in the news in the West. 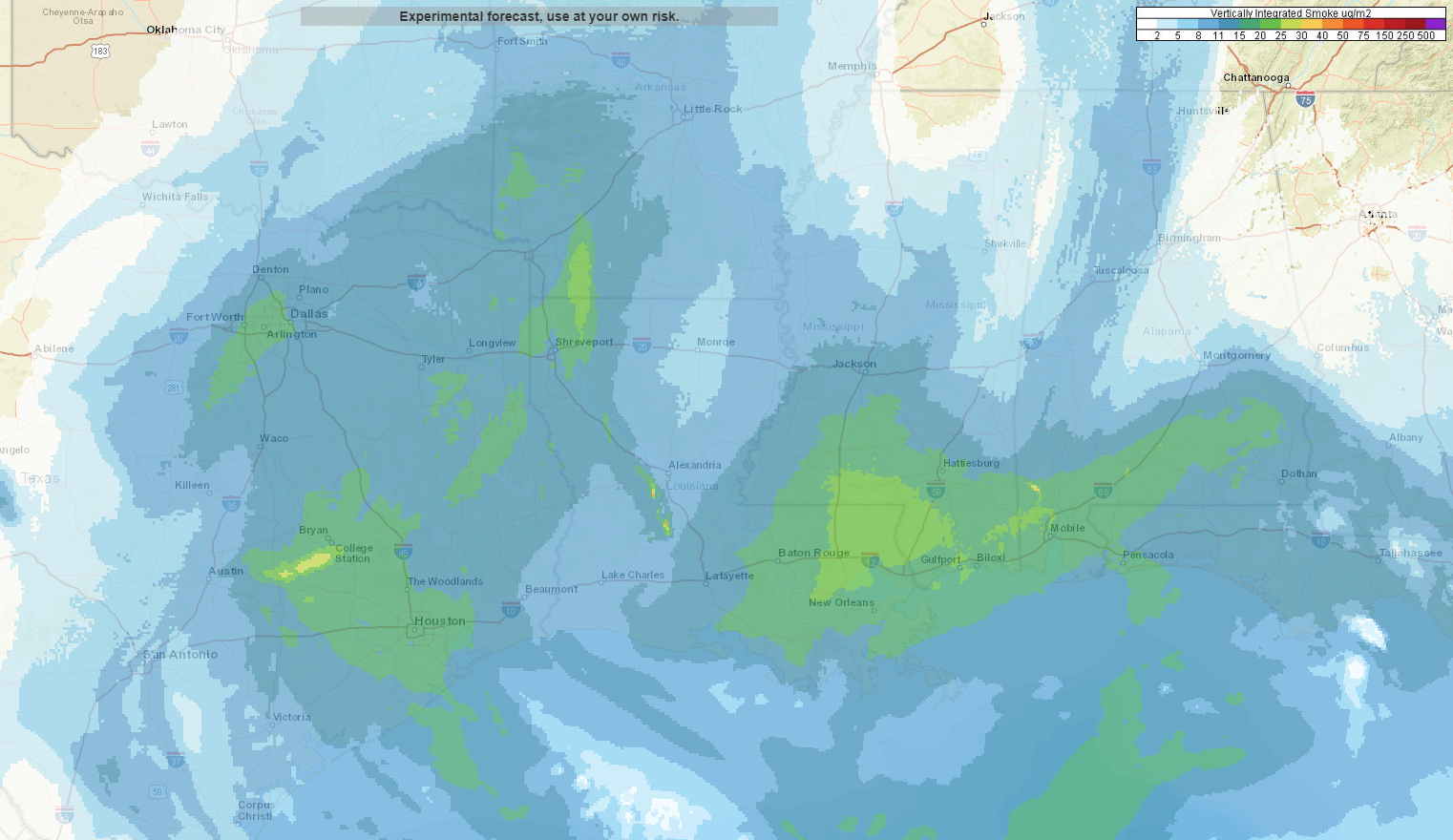 An experimental forecast from the HRRR model, shows that as of 7 AM today, smoke will be prevalent over much of East Texas and Louisiana. (NOAA)

Expect somewhat poor air quality, with haze and smoke, along with elevated levels of ozone to impact the region through tomorrow. Air quality should slowly improve by the end of the weekend. Temperatures will not improve much unfortunately.

It looks like we’ll be experiencing more in the way of typical August weather over the next couple days, but with very low rain chances. Folks will be lucky if they see an isolated downpour through tomorrow. Otherwise, it will just be hazy, sunny, and humid. High temperatures today and tomorrow should approach the upper-90s to near 100 degrees. Morning temperatures will be in the upper-70s, with a face full of humidity.

Things change just a little here. I would expect partly to mostly sunny skies, with high temperatures generally in the mid-to upper-90s and AM lows again just under 80 degrees. The main difference between Sunday & Monday versus today and tomorrow will be a slight boost in rain chances. If chances today and tomorrow are 10 to 20 percent, chances Sunday and Monday will be roughly 20 to 30 percent. So, you’re still not necessarily likely to see any showers, but your odds are a bit higher here than they will be today or Saturday.

END_OF_DOCUMENT_TOKEN_TO_BE_REPLACED

It’s August in Houston, so it should be no surprise that Houston’s weather is doing August things. After temperatures hit 99 degrees on Wednesday, we can expect more very warm weather to end the work week. Meanwhile, a year ago today, Harvey’s rainfall threat was becoming very, very real.

The National Weather Service has issued a heat advisory for Thursday, and likely will extend it for Friday, as high temperatures are likely to reach 100 degrees, with a heat index of 105 to 110 degrees. These days will basically be a lot like Wednesday, with mostly sunny skies, hot days, and warm nights with lows in the upper 70s to 80 degrees. 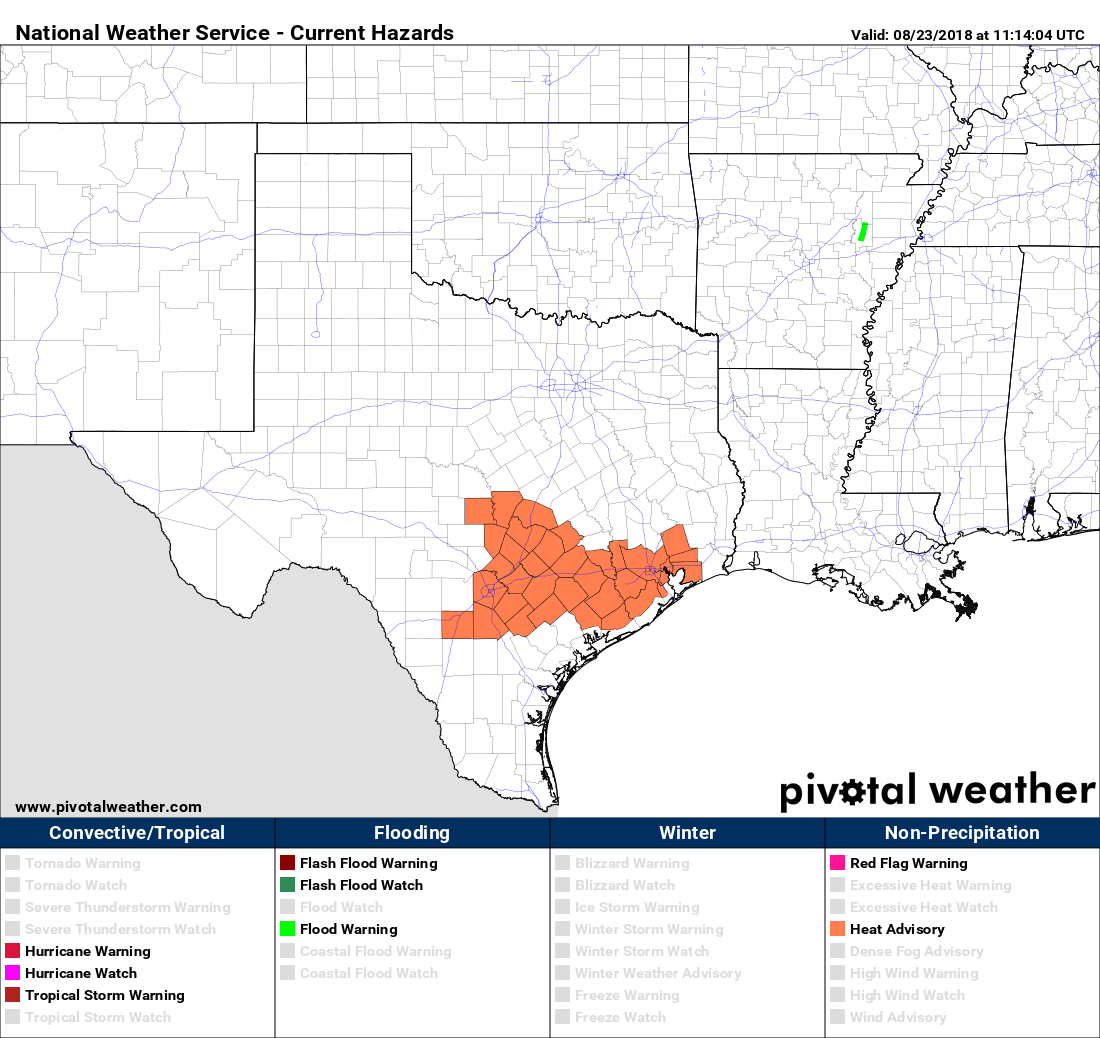 A heat advisory is in effect for Texas along the I-10 corridor today from central Texas through Houston. (Pivotal Weather)

Another very warm day, but as high pressure begins to slide away to the northeast, we’ll see some slight rain chances return to the forecast. If you have outdoor plans, I wouldn’t worry too much. I still anticipate mostly sunny skies, and high temperatures in the upper 90s. It’s just that we can’t rule out a few isolated to scattered showers moving through the area during the late morning and afternoon hours.

Still very warm, with temperatures in the mid- to upper-90s, but as high pressure recedes a little more, I anticipate rain chances to nudge up to 20 to 30 percent. Skies should remain at least partly (if not mostly) sunny for both of these days.

END_OF_DOCUMENT_TOKEN_TO_BE_REPLACED

A cold front will slowly move through Houston today, but the cruel reality of this in August is that drier air generally just means warmer days as high pressure builds in behind the front. And that’s just what we’ll see. At the end of today’s post we’ll also take a look at our forecast for Harvey a year ago, when the system still had not formally re-developed into a tropical storm, but clearly had become a rainfall threat.

With high pressure over head, slightly drier air, and mostly sunny skies the Houston region will see ideal conditions for daytime heat to end this work week. Expect high temperatures of around 100 degrees, give or take, with overnight lows in the upper 70s. This is classic August heat. 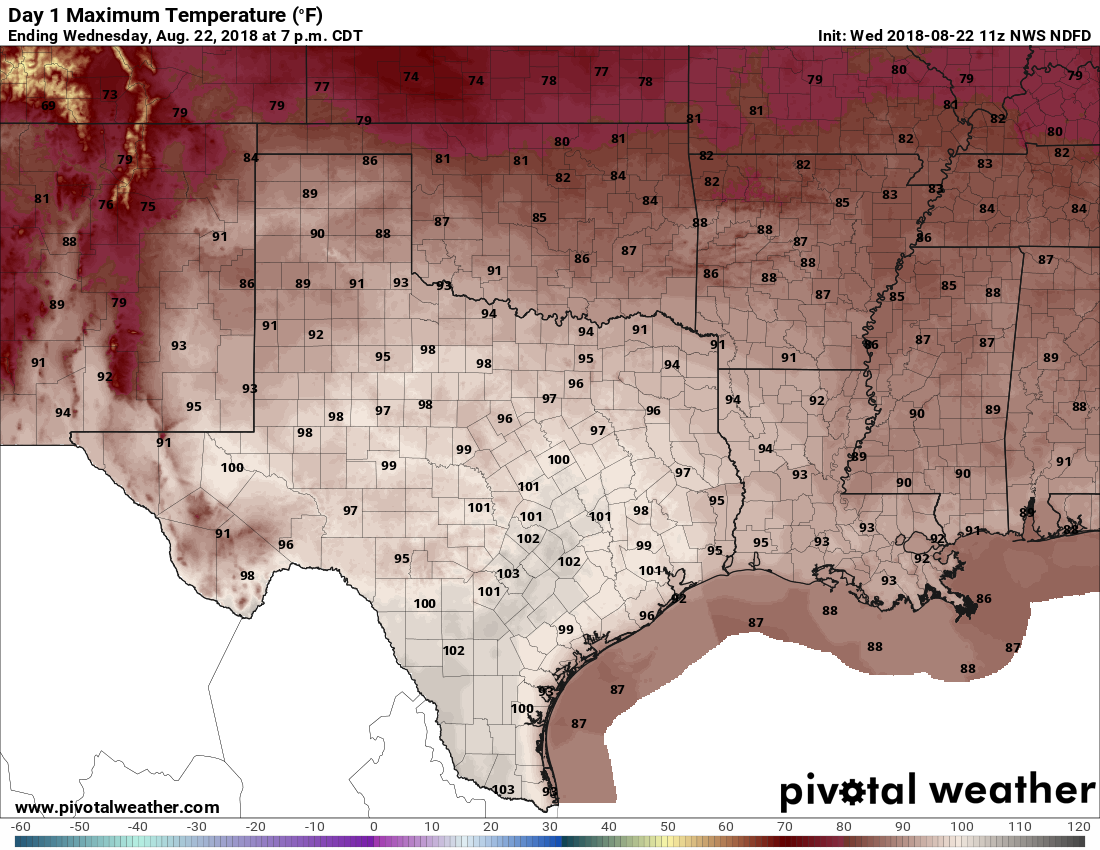 Have yourself some August heat today, Texas. (Pivotal Weather)

By later Friday or Saturday morning, the high pressure should have moved sufficiently off to the northeast to allow more moisture to move in from the Gulf of Mexico. The net effect of this will be to bring some clouds into the region and bring temperatures down into the mid-90s. We’ll also see some isolated to scattered showers, most likely during the afternoon as the sea breeze moves inland.