Good morning. The Houston area is sailing toward fairer weather—this weekend looks hot and sunny—but before that time we’ll face a couple of days with fairly healthy rain and thunderstorm chances. Also, with the school year ending, Matt and I will be convening our final Wednesday Weather discussion on Facebook at 10am CT today. Please join us. I’ll post a link to a YouTube version tomorrow morning if Facebook is not your thing.

Conditions this morning are quite fine for late May, with clear skies and temperatures lower than normal. Conroe got down to a spectacular 60 degrees with the region’s slightly drier air. However the sunshine is unlikely to last for most of Houston. Even though an upper-level level low pressure system is moving away from us, it should help pull an atmospheric disturbance into the area. What we think probably will happen is the development of storms west or northwest of Houston sometime this afternoon. 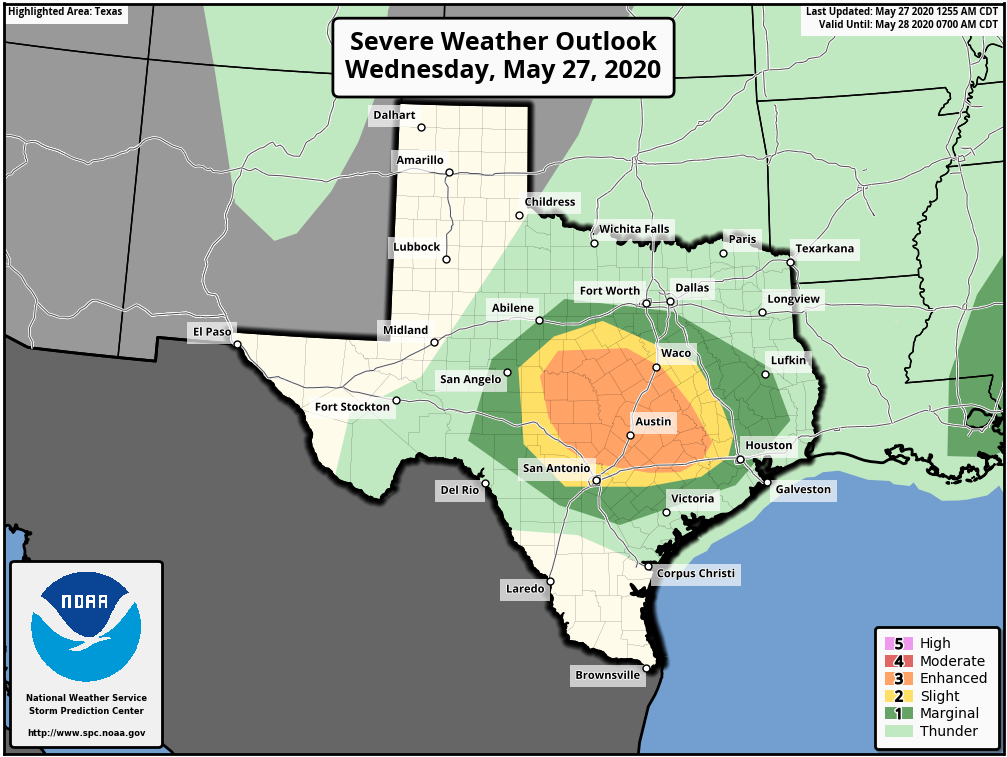 These storms will then sag and then (maybe?) weaken as the slide into the city during the late afternoon, evening, and overnight hours. NOAA’s severe weather outlook shows the higher risk to the west of Houston, with the threat of strong winds and hail. Rain accumulations will be less than half an inch for most, but areas under heavy thunderstorms will get more. Until storms develop today expect mostly sunny skies with highs near 90 degrees.

A similar pattern could set up Thursday, with partly sunny skies in the morning giving way to the potential for storm development during the afternoon. This may be aided by the passage of a weak front—hard to call it a cold front as there won’t be much cooler air. Rain chances are around 50 percent for the region, with highs again going up to around 90 degrees.

END_OF_DOCUMENT_TOKEN_TO_BE_REPLACED

Good morning. Moderate to briefly heavy rainfall moved through the Houston area during the overnight hours, generally dropping between 0.25 and 1 inch of rain. This looks to be the last of our organized storm systems for awhile, although our region will certainly face the possibility of scattered showers and thunderstorms this week. But overall, the last week of May 2020 will be reasonably pleasant weather-wise, with slightly lower humidity than normal. Enjoy this, friends, because June is around the corner.

The remnants of the overnight rainfall system are pushing through Houston this morning, and should move out by 8 a.m. or 9 a.m. Skies should be partly to mostly cloudy today, with the possibility of additional scattered showers this afternoon. Highs will reach the mid-80s. You may notice winds start to come from the north later today, and this will give us shot of slightly drier air that may linger for most of this week. It should be especially noticeable this evening, and on Wednesday morning when lows drop into the 60s for most areas except the coast. 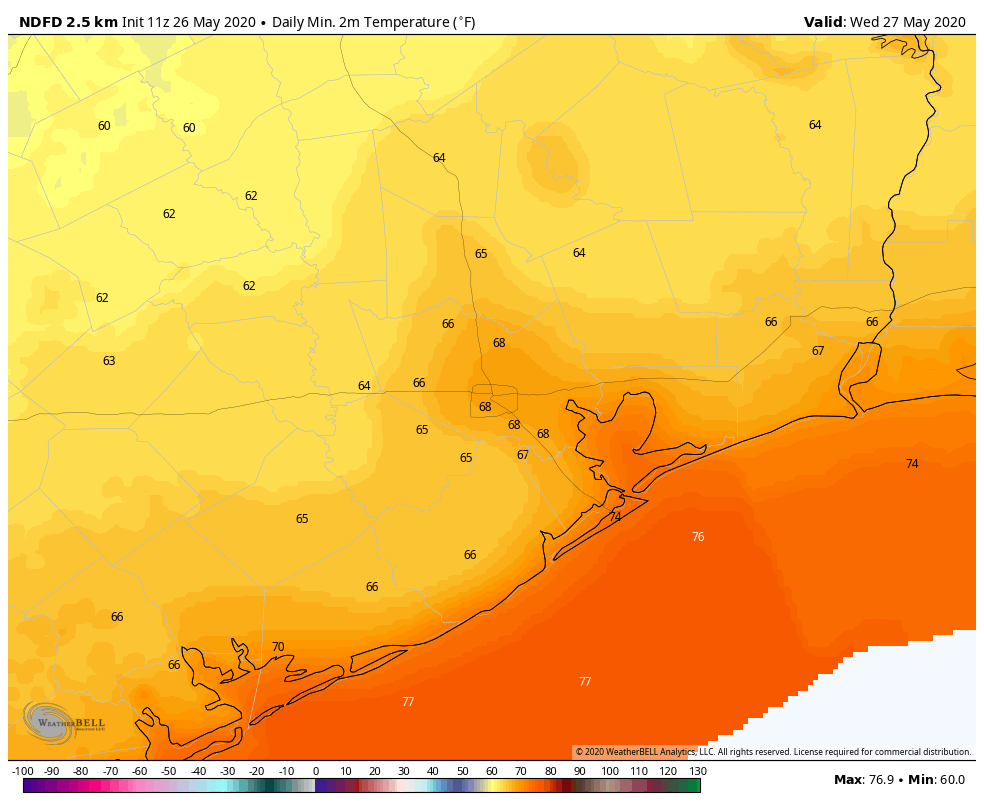 Low temperatures outside of Houston look quite pleasant on Wednesday morning. (Weather Bell)

The much discussed upper-level low pressure system should continue to wobble away from the region on Wednesday, and this should lead to partly to mostly sunny skies. This, in turn should allow for temperatures to push into the upper 80s, and this daytime heating may trigger a few afternoon showers. Lows Wednesday night should be a few degrees warmer than Tuesday. It’s possible we may see some additional showers late Wednesday night into Thursday morning, but I don’t have overly high confidence in this.

END_OF_DOCUMENT_TOKEN_TO_BE_REPLACED

On this Memorial Day, when we remember those who died serving our country, we both literally and figuratively have a cloudy forecast. Strong thunderstorms raked northern parts of the metro area on Sunday afternoon and evening, and then another line of storms moved through much of Houston this morning. Some areas in east Houston near the Sam Houston Tollway received nearly 5 inches of rainfall, all told. The result of all this is that, as of this morning, the atmosphere has somewhat stabilized.

Accordingly, we expect mostly cloudy skies for most of Memorial Day, with highs pushing into the mid-80s later this afternoon. It’s possible that some areas may see a break in the clouds later today, but for the most part the Sun should be hidden. Our best guess is that rain showers will be scattered to non-existent during the daytime with the atmosphere calmed down. 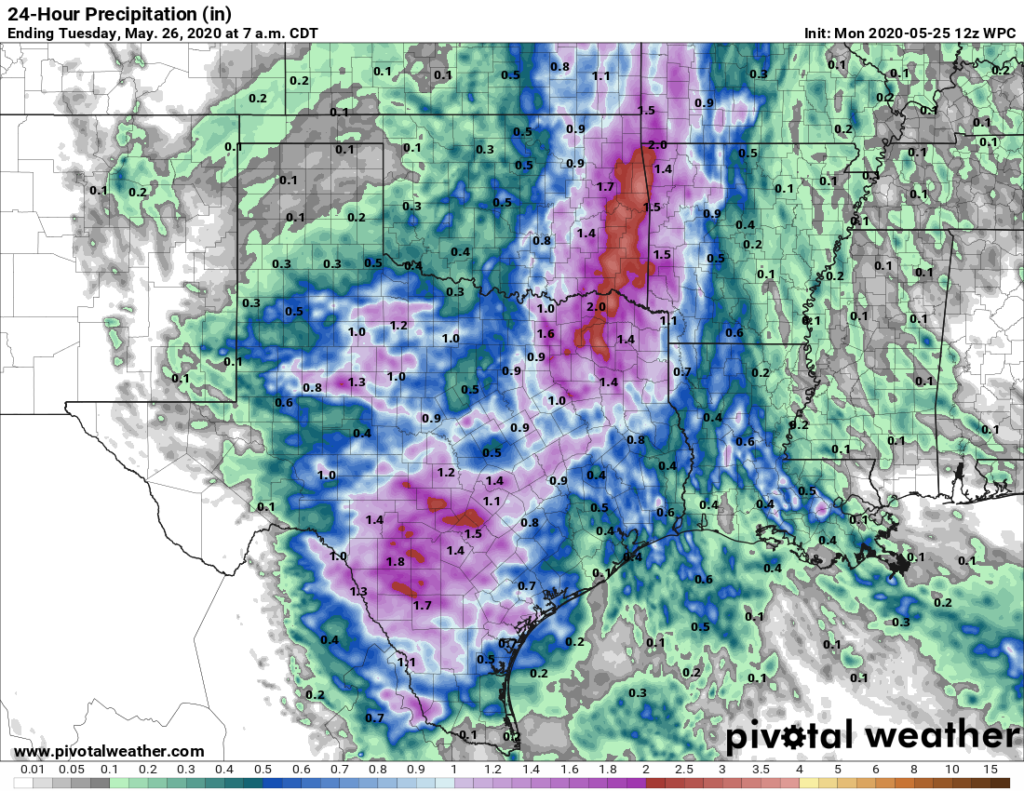 Pretty much all of Texas will likely see a wet Memorial Day, or Memorial Day night. (Pivotal Weather)

However, at some point during the overnight hours or on Tuesday morning it seems like conditions aloft will become stabilized. Therefore we could see another disturbance push through the region like what happened early on Monday morning—a broken line of showers and thunderstorms bringing another one-half inch of rain or so to most people.

For the remainder of the week, Houston’s weather will remain subject to the whims of a meandering upper-level low pressure system. For now it appears as though Houston will be wet at times this week, but we’re not anticipating anything too extraordinary. So while we’re vigilant about the flooding potential this week, we don’t see any signs of anything beyond some short-lived street flooding—for now at least.

Good evening. Today started out as a spotty day, before thunderstorms really revved up over the northern and western halves of the metro area, including some hail in The Woodlands and eventually a tornado warning for northwest Harris, Waller, and parts of southern Montgomery Counties. As I write this, those storms have reorganized and are making one final push south and east across the area. Carpenter’s Bayou at I-10 near Channelview has received over 1.5 inches of rain in the last 15 minutes. Scattered heavy rains will slowly slide south and east and dissipate over the next few hours. 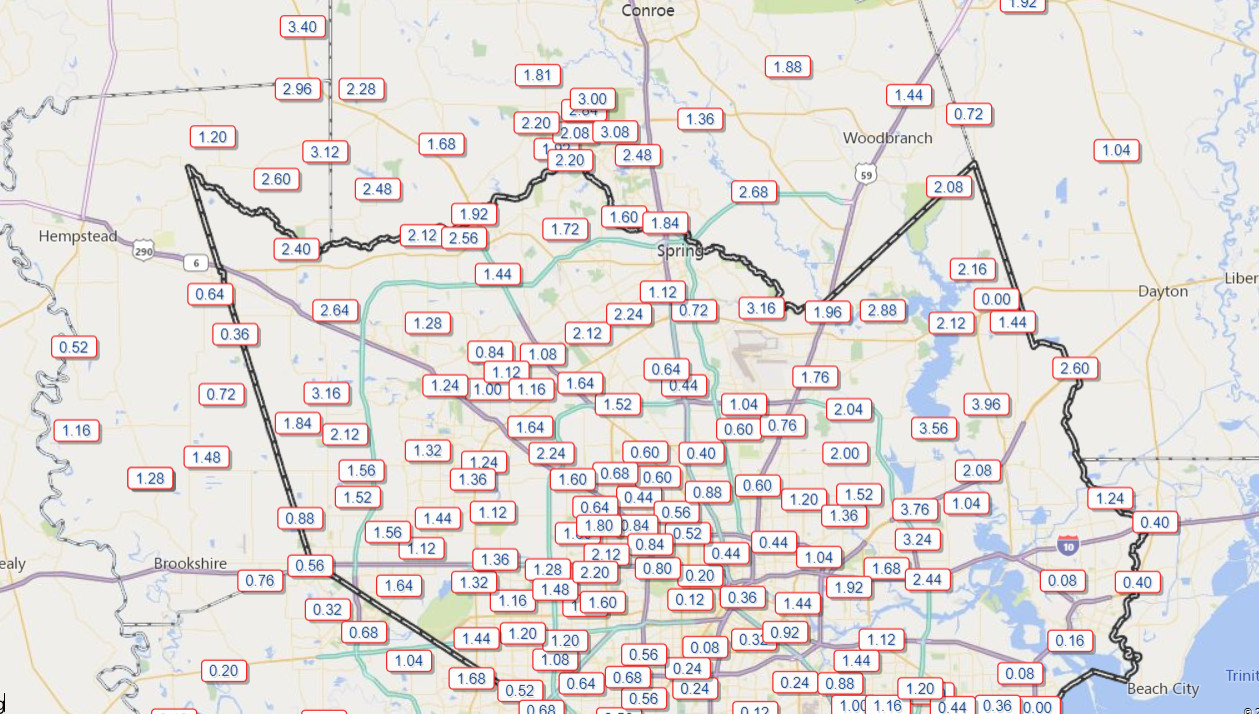 Rain totals have ranged from less than 0.10″ in the Med Center to as much as 4 inches near Crosby. (Harris County Flood Control)

The map above is intentionally skewed to show the north side of the metro area, as there’s been far less rain to the south today. Rain totals on the east side will increase markedly in spots before the night’s up, as this map is only through 7:45 or so. You can view more rain totals and more time scales at Harris County’s outstanding rainfall page. Rain totals were paltry to non-existent southeast of Houston and toward most of Fort Bend County.

Looking at radar across Texas this evening, it’s pretty evident that we are not done tonight.

A radar loop over Texas shows additional storms organizing in Hill Country and South Texas. Those will sweep through Houston overnight. (College of DuPage)

Storms are pooling west of I-35 this evening, which is something that had been well telegraphed on weather models the last couple days. Those will move through the area overnight.

So expect conditions to improve between now and midnight, though rain may continue at times. Weather models have been suggesting the next round of storms would arrive in Houston around 3 AM or so. I would not be shocked if that occurs a little sooner based on radar. When that happens, we’ll probably have some loud, wake your dogs up thunder, heavy rain, and potentially some strong gusty winds. The good news is that storms should be moving, so although some brief street flooding may occur, things should not last too terribly long. New rainfall should range from a half-inch to perhaps 2 inches over most of the area.

Storms will exit after the morning, and we’ll probably be left with clouds and a few showers. The atmosphere will likely need time to recover, so the majority of Monday morning and early afternoon we think will be fine right now. In the late afternoon and evening, we may see conditions become more conducive for storms to redevelop. Exactly where and when? TBD. But those would probably be similar in nature to what we see occurring this evening: Slow movers, occasionally strong, and capable of putting down 2 inches in an hour, meaning a few unlucky spots may receive another few inches of rainfall with those. So yes, street flooding will again be possible under any storms.

Temperatures will be held down in the low- to maybe mid-80s.

With a low pressure system in the upper atmosphere placed just to our north and west for Monday night, Tuesday, and Wednesday, you can expect additional rounds of thunderstorms across the area, with varying degrees of intensity each time. We will likely need to watch for areas of flooding risk over more of the area through that period, details TBD. By Thursday, that upper low should begin to migrate toward Louisiana. That should mean improving weather heading into next weekend, but I don’t want to get your hopes too high just yet. We’ll keep you posted.