Since Friday, Harvey has moved into Texas, meandered around the area between Corpus Christi and Houston, moved offshore, and is now moving steadily to the east. It’s taking its godforsaken rain with it. The meteorological event has now ended, but unfortunately this is only the end of the beginning. Now comes the hard part, putting our city back together. We’ll have much more on that later. 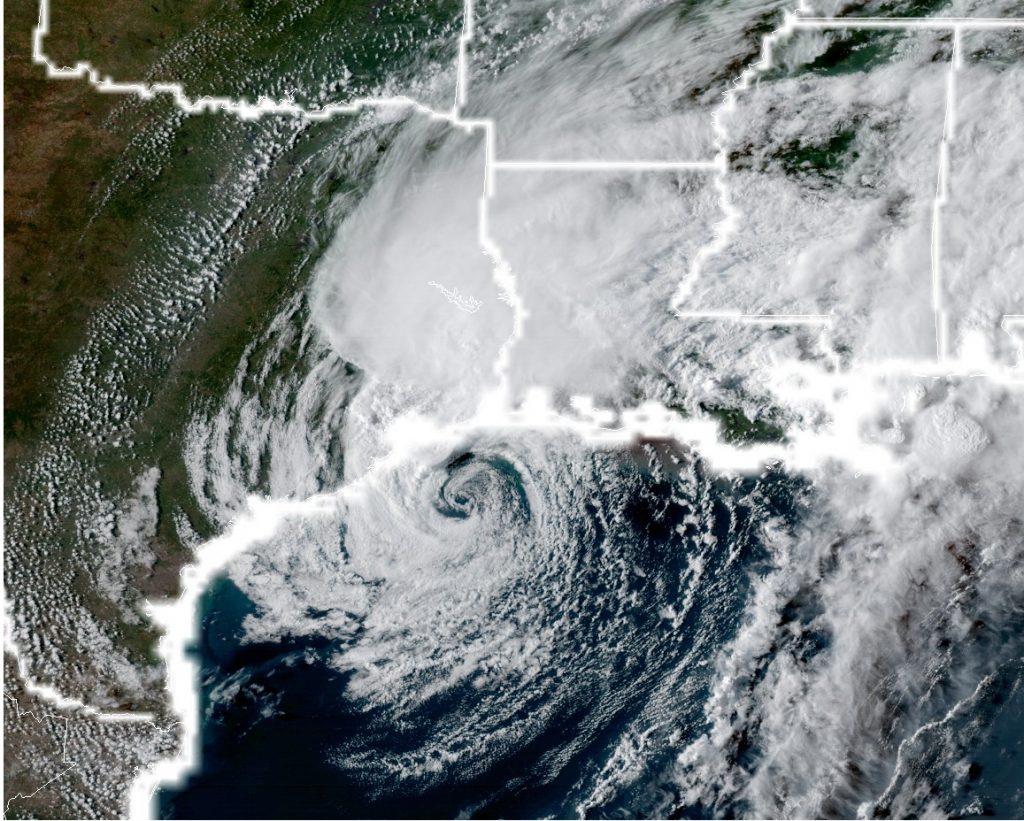 Light rain has been falling across Brazoria, Galveston, and eastern Harris County late this afternoon and evening, but rates have been easily manageable at 0.10 inch per hour—this is less than 50 times the rainfall rates seen during the peak of Harvey. Overnight this western periphery of Harvey’s rains should continue to move east, hopefully pushing through Liberty and Chambers counties by or before sunrise.

For Wednesday, we can’t rule out some rain showers (the southwestern edge of Harvey) rotating through the area, but we don’t anticipate any widespread flooding from these problems. In fact, on Tuesday night and Wednesday, in absence of heavy rainfall, we should see fairly rapid falls in most area bayous.

Mostly sunny conditions should prevail from Thursday through Saturday, with highs in the low 90s, during which Houston can get to work on cleaning itself up. There is much to be done. Can’t rule out some showers, but there won’t be anything too concerning.

We’ve seen some concerns about the GFS model showing the development of a low-pressure system over the Gulf of Mexico next week, and blowing up some potentially heavy rain over the eastern half of Houston by late Monday or Tuesday of next week. While there’s a chance for the return of some heavier showers, we’re not too concerned about this. We’ll have more on that in the morning.

For now when you go to bed tonight, wherever you are, enjoy the thought of not waking up to thunder, pulsating rain, or tornado alarms. Finally.

Tuesday, 2:05pm CT— Good afternoon. Another dreary day across much of the region as Harvey (finally!) begins to slowly pick up some speed and pull away. Thankfully the Houston area has seen minimal additional rains today, with most places across the hardest hit spots earlier in the week at or below one inch of new rain. Today’s hardest hit location is clearly Galveston.

Harvey is a shell of what it once was, but it’s trying to take up a new lease on life as it leaves our area. 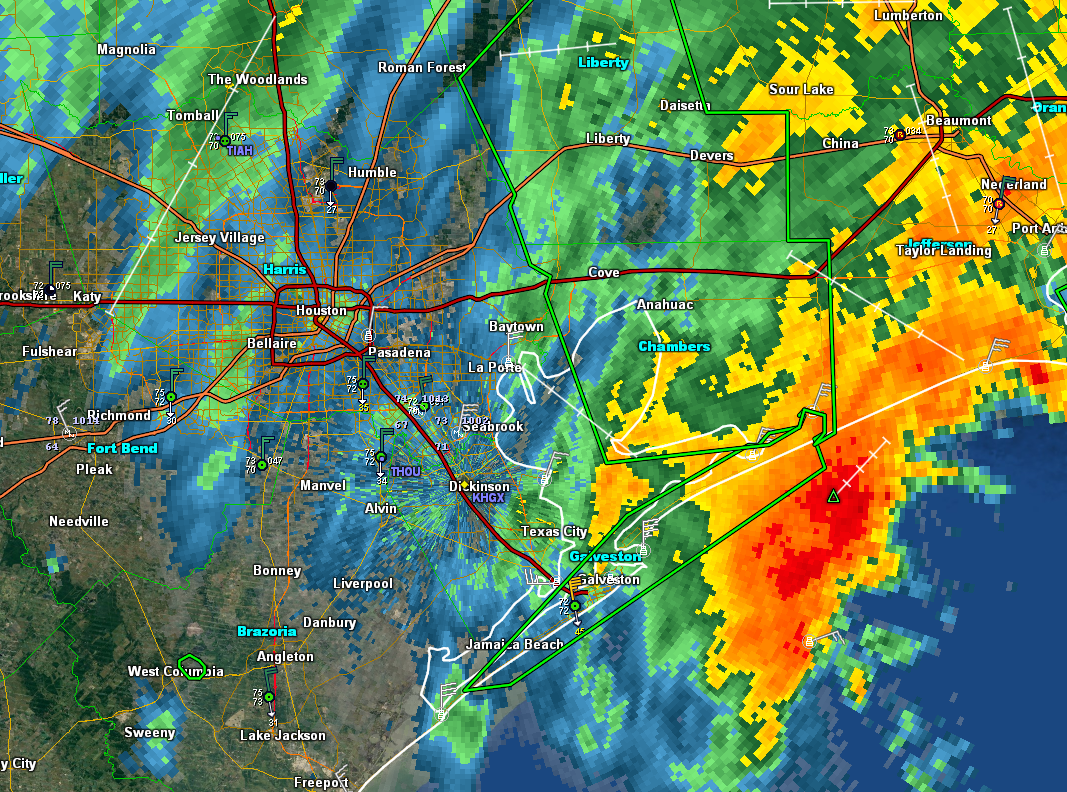 Harvey trying to reorganize a bit as it begins to exit the region. (GR Level 3)

Harvey has been hammering Galveston all morning with heavy rain over 7″ total today, along with strong winds. Gusts over 50 mph have occurred at times on the island. This will continue as Harvey pulls away, but with a slight downward trend eventually.

Rains have really cut back around Houston, which is great news for us. Our neighbors to the east are unfortunately now in a serious predicament with extremely heavy rain pointed at the Beaumont and Port Arthur area. These areas have been similarly battered by rainfall since the weekend. Heavy rains will lash that area through this evening, worsening a bad situation. Some additional rains may redevelop tonight over Houston, but around the city, rain totals today will be the lowest they’ve been since at least Saturday.

Harvey is on its way, and it will make landfall late tonight or tomorrow morning likely in Cameron Parish, LA or near Port Arthur. We should see rain risk trend downward tomorrow with just a few showers, mostly in the morning and amounts should be mainly inconsequential as it relates to flooding. Skies may not clear out completely, but many of you will see sunshine tomorrow I project. We will stay dry into the weekend before at least some rain chances (hopefully mostly scattered stuff and nothing too organized) returns to the picture after Labor Day. We’ll have more on that once we dust ourselves off after Harvey’s exit.

Tuesday, 11am CT—There is some good news in the latest update from the National Hurricane Center on Harvey’s position and movement—the storm is off the coast to the southeast of Galveston, and it is moving a bit faster (5 mph) to the east northeast. This means it is definitively moving away from the greater Houston area, and the rains are going to end. But we’re not across the finish line yet. This post will also take a quick look at some area waterways, and address rumors about “another hurricane.” 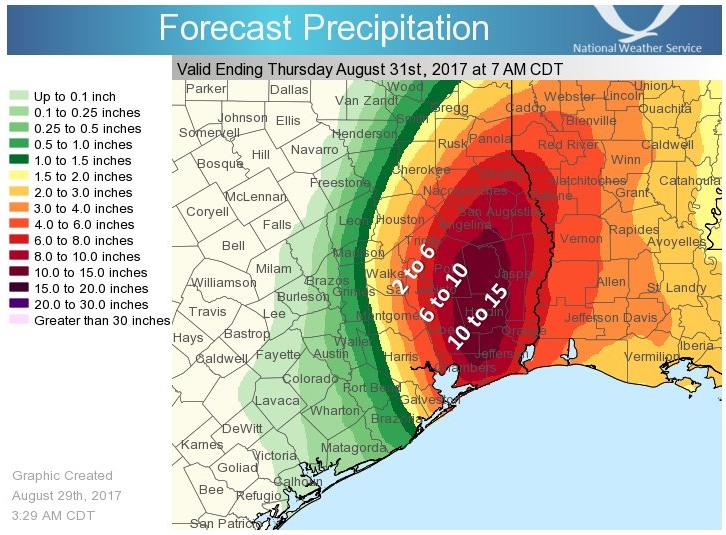 We are probably about 24 hours away from a general cessation of rainfall, including for most of the eastern half of the Houston area. It’s been an absolutely miserable four or five days, but it’s almost over

END_OF_DOCUMENT_TOKEN_TO_BE_REPLACED

Posted by Braniff Davis at 8:36 AM

Tuesday, 8:30am CT—Understandably, it is hard to think about what must be done after a natural disaster. We know the stress of the moment is nearly too much to bear—especially for those of you who are dealing with immediate flooding issues. Water in your home. A flooded business. A lost vehicle. All of our thoughts and prayers are with you.

We are not experts in disaster recovery, we’re just forecasters. But we can provide some basic information about what to do when the rains are finally over, and we all will have to face the reality of damaged or lost property. While it may be difficult to fathom a return to normalcy right now, we hope this information may prove useful in the coming days.

Though flood waters may begin receding from your neighborhood, do not go back into your home until authorities say it is safe (i.e. despite the temptation, do not drive around barriers). This may not happen until Thursday or Friday, as Harvey finally leaves the area. Roadways can appear safe, but flood waters could erode the ground from under the asphalt, creating sinkholes. Wait until roads are free of water and safe to drive before attempting to return. Avoid standing water as well—water could be electrically charged from power lines, or hide dangerous wildlife (think alligators, snakes, or floating beds of fire ants). 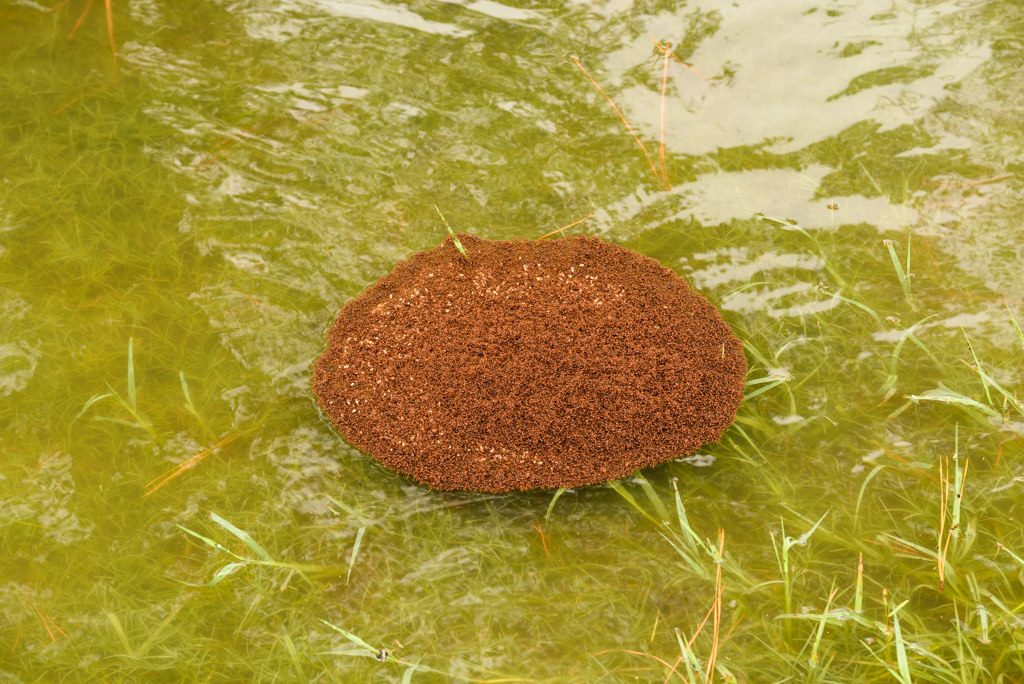 A raft of fire ants in Pearland, Texas. (Brant Kelly/Flickr)

Once you get into your home, the first thing you should do is turn off the electricity at the main breaker, even if power is out in your community. Turn off the gas valves that feed into each individual appliance (stove, water heater, etc.). Then, carefully check your home to make sure there is no structural damage. Flood waters can put tremendous strain on the structure of a home. Take plenty of pictures of anything that is damaged, and contact your insurer immediately. As you begin any cleanup efforts, keep receipts. It may take insurance adjusters days or even weeks to assess your damage, so keep meticulous records. Finally, remember that flood insurance is a separate policy from homeowner’s insurance.