After a stunning Sunday, we’ll now see the return of some clouds today, and as early as tonight some healthy rain chances. Most of this week looks pretty gray, although there’s a chance of sunshine toward the Friday or Saturday period. Unfortunately, the forecast from Thursday on is fairly uncertain at this point.

Skies remain somewhat clear this morning for parts of Houston, and we’ll see at least partly sunny skies for most of today, as highs warm into the mid-60s across Houston. However, change will be on the way as the high pressure system overhead moves away, and winds begin to return from the east and southeast. With this returning moisture, a few scattered showers will be possible near the coast this afternoon and early evening.

Every weekday for the next three weeks, we’re going to offer Rodeo outlooks for people going to the concert. (Tonight, I’ll be among them, as Mrs. Space City Weather is a big Kasey Musgraves fan.) We’ll see temperatures of about 60 degrees at 6pm, with partly to mostly cloudy skies, and 10mph easterly winds. We can’t entirely rule out rain chances, but they’re probably around 10 percent for central Houston. After the show, temperatures will still be in the upper 50s, but the chance of scattered showers will be better, probably closer to 30 percent. Any rain should be light.

This looks like a wet and gray day. Highs will get into the mid- to upper-60s, and the combination of warmer air, low pressure, and ample moisture should lead to on- and off-again (mostly) light to moderate rain showers. All told, accumulations for most should be well under one-half inch, but a some areas may see a bit more. We also can’t rule out a few pockets of hail. The healthy rain chances should persist into Tuesday night, when lows for most won’t fall below 60.

END_OF_DOCUMENT_TOKEN_TO_BE_REPLACED

The good news is that the worst of the weather the next couple days will likely miss the Houston area well to the northeast. The bad news is that we will still have multiple rain chances to contend with through tomorrow before we get on to the good stuff.

While today should not be a washout, there will be plenty of shower activity around. Initially, showers are west of Houston near Katy and north up through Conroe.

Radar this morning shows most shower activity from about Katy north through Tomball and into Conroe. (RadarScope)

As we go into this afternoon, I think we’ll see the focus of these showers shift east of I-45 and north of I-10. Thunderstorms will also be possible, but with the area likely to see some degree of atmospheric capping (“the cap,” as it’s often referred to, which is basically an atmospheric temperature inversion that inhibits thunderstorm growth) I don’t think we will see too much in the way of significant storms. That will be reserved for areas well north of Houston, up toward the ArkLaTex.

Yesterday was cold and drizzly. Today will begin similarly. We should see temps warm a bit further today though and manage at least the upper-60s in Houston, mid-60s in The Woodlands, and low-60s in the Brazos Valley. That being said, sometimes temperatures behave very stubbornly in these types of patterns, so there’s a definite slight chance we don’t get out of the 50s until later tonight. Keep the jacket handy.

For at least the 500th* time this month, fog is pestering the coast this morning once again.
*approximate 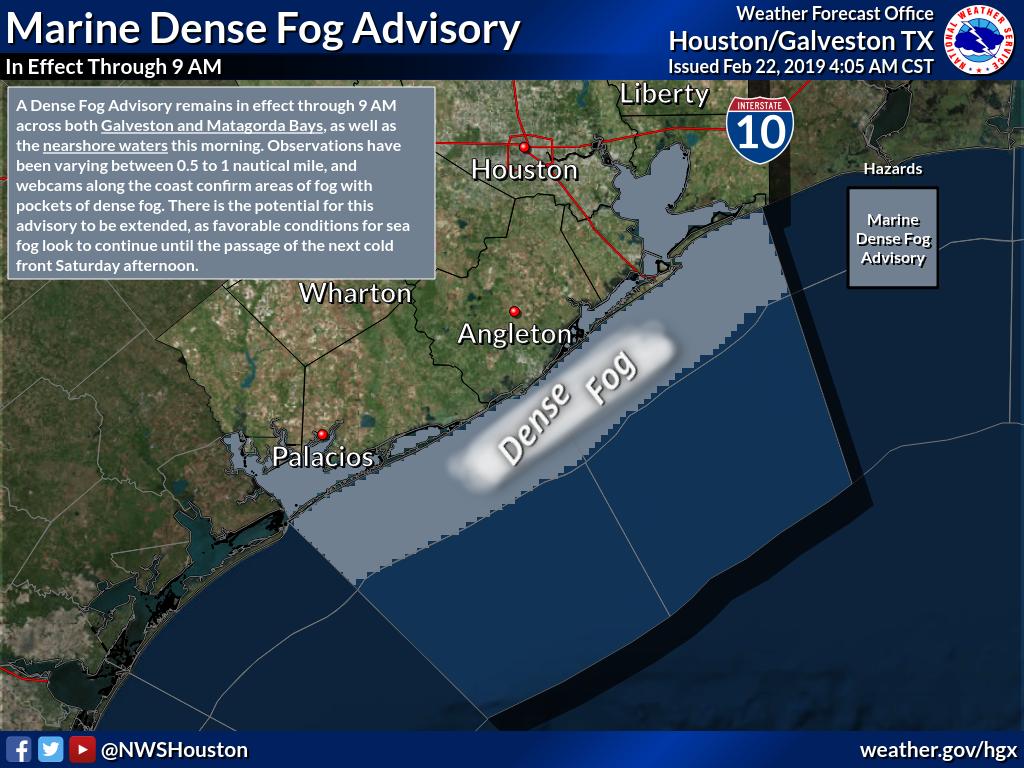 Dense fog is an issue along the coast and in the bays, so give yourself extra time if you are traveling to or from those areas today. (NWS Houston)

Dense fog is likely to hang along the coast and in the bays most of the day today. Exercise caution if you’ll be driving to or from those areas today.

We will carry a continued chance of showers through the night, but no heavy activity is expected. It may be more mist or drizzle than anything, with a gradual transition toward showers. Fog will continue in the bays and along the coast, though it could begin to become a little more dispersed at times overnight as winds pick up a bit. Look for temperatures to hold steady or finally rise into the mid- to upper-60s if they haven’t gotten there this afternoon.

END_OF_DOCUMENT_TOKEN_TO_BE_REPLACED

As high pressure has scooted east of the area, low pressure has returned, and along with it plenty of moisture that will fall as rain the next few days. Rain chances will remain above 50 percent through Saturday, before a front arrives to bring us some much nicer weather—we still anticipate an outstanding second half of the weekend.

Rains developed offshore late Wednesday, and have moved into coastal areas this morning. So far amounts have been more than manageable, with about one-quarter inch the maximum amount. But this surge of low-level moisture and low pressure will nonetheless make for a wet and gray day, with highs struggling to reach 60 degrees. Most of the area likely will not see more than one-quarter to one-half inch of rain. With the southerly flow, temperatures Thursday night will not fall much as on-and-off mostly light to moderate showers continue. 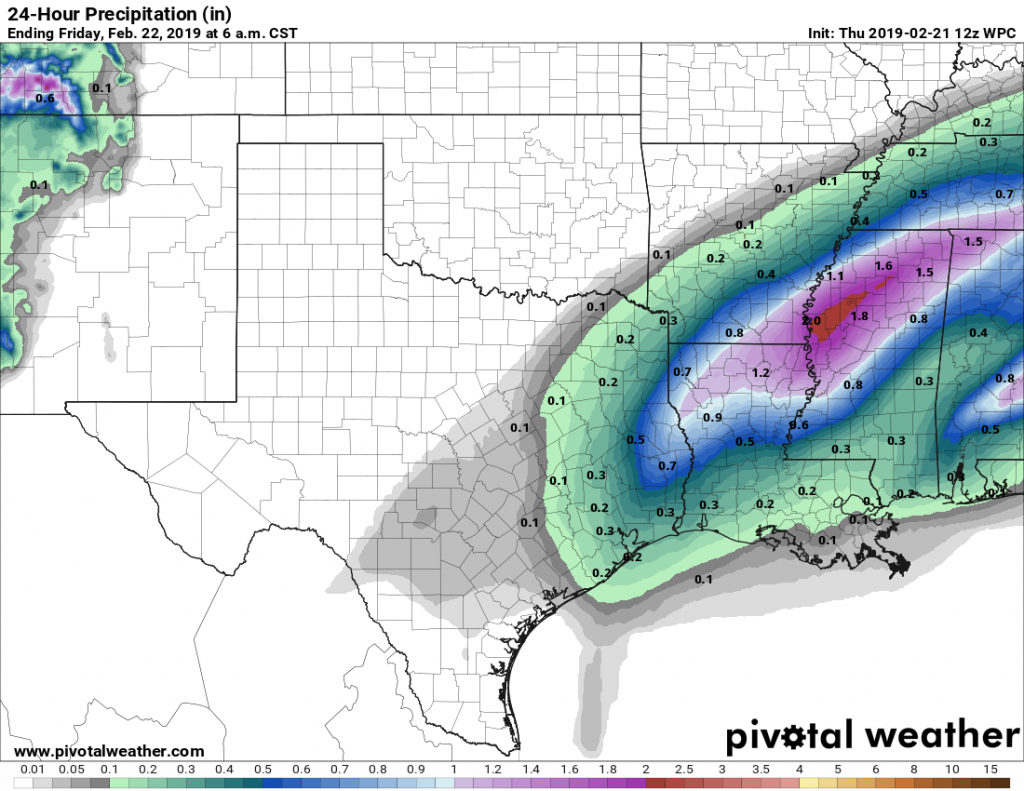 Friday will be warmer, with cloudy skies, and highs in the 70s. With more moisture moving in Friday, we can expect more come-and-go rain showers. Again, there should be no real concerns with accumulations, as this will be just another gray, wet, albeit warmer day in Houston. The greater rain accumulations—one inch or more—should occur well to the north and northeast of the region. Lows Friday night may not fall below 70 along the coast, and probably will only drop into the upper 60s for the city.

END_OF_DOCUMENT_TOKEN_TO_BE_REPLACED

A cold front pushed through the region Tuesday night, and this should give us a brief bit of drier air and sunshine today before clouds and intermittent light rain return for the rest of the week. The next nice day should come Sunday before rain chances return on—you guessed it—Monday.

It’s chilly this morning, with lows in the mid-40s, and cloudy skies. However, as drier air moves in from the west we’ll see some clearing skies and this afternoon should be pretty nice with partly to mostly sunny skies, and highs in the mid-60s. This should last about through this evening as high pressure exits to the east, and low pressure returns. This will lead to an influx of moisture, clouds and rising rain chances tonight.

As the image above shows, moisture will return rapidly, with drier air Wednesday giving way to moisture return from the Gulf of Mexico by Thursday. Showers and a few thunderstorms will be possible Thursday across the region, but for most accumulations should be a few tenths of an inch of rain, or less. Highs will be around 60 under leaden skies.