Good morning—we hope everyone is preparing for a fun and safe celebration tonight. Mother Nature will be ready to do its part, bringing a dry and temperate evening to the festivities. Space City Weather will return to normal business on Thursday, so in the meantime please accept our wishes for a Happy New Year!

The last day of 2019 should be fine, with partly to mostly sunny skies through most of the daytime hours. We can probably expect a high temperature of about 60 degrees with very light winds. Some clouds will move in during the afternoon and evening hours, and temperatures during the run-up to midnight should be in the low 50s. Winds will remain light.

Whereas we once expected New Year’s Day to be a soggy affair, the better rain chances have now slipped into Wednesday night and Thursday. Therefore, we expect most of the daytime hours of New Year’s Day to be gray, but without too much, if any precipitation. Highs will reach about 60 degrees, or a little above, for most of the region. Rain chances increase during the evening and overnight hours as low pressure moves up the coast. 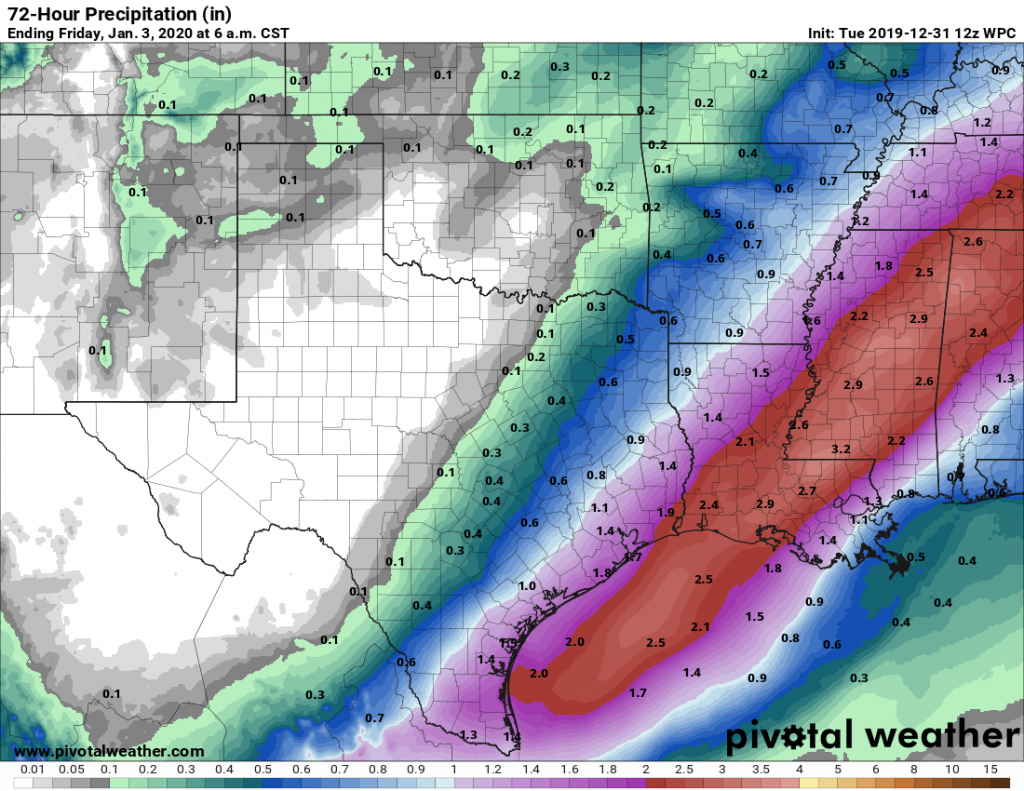 Forecast models have been waffling on how best to handle the precipitation resulting from the low as it moves up the coast, through Houston, and into Louisiana. Right now the stronger thunderstorms and greatest amount of rainfall should remain off the Texas coast, and into Louisiana. But the Houston area could still see 0.5 to 2.0 inches of rain from Wednesday evening through Thursday evening, with even a bit more along the coast. As the low pressure system moves off to the east, a cold front will slide in behind it, bringing an end to rain chances by Thursday afternoon or evening.

After a gray, and then wet start to 2020, the region should see several days of sunshine and pleasant weather with highs in the 60s and lows in the 40s. Enjoy!

Sunday’s rainfall almost certainly marked the last significant precipitation of 2019 for the greater Houston area. The region experienced some extreme rainfall, punctuated by Tropical Storm Imelda in September. But overall, Houston came in near normal with annual rainfall—receiving a total of 51.93 inches at Bush Intercontinental Airport (the region averages just north of 48 inches per year). The wettest year on record came in 2017, driven by Hurricane Harvey, with 79.69 inches. Here’s the climate graphic, with Houston’s rainfall totals on the bottom: 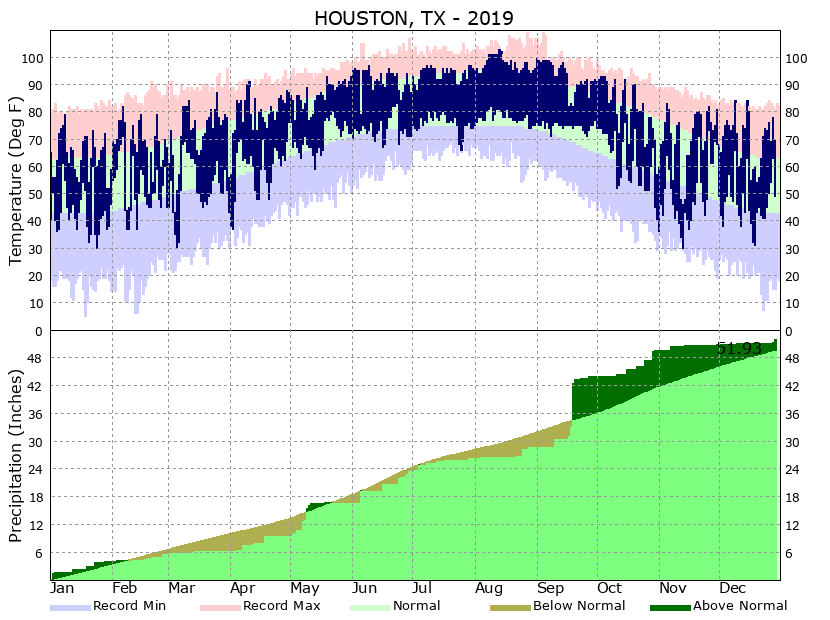 The story is considerably more interesting to the east of Houston, in Beaumont, which bore the brunt of Imelda. That region, based upon its official monitoring station at Jack Brooks Regional Airport, has recorded 85.46 inches of rain in 2019. But this ranks only third in annual totals, behind 2017 (104.30 inches) and 2018 (88.75 inches), based on 117 years of data. 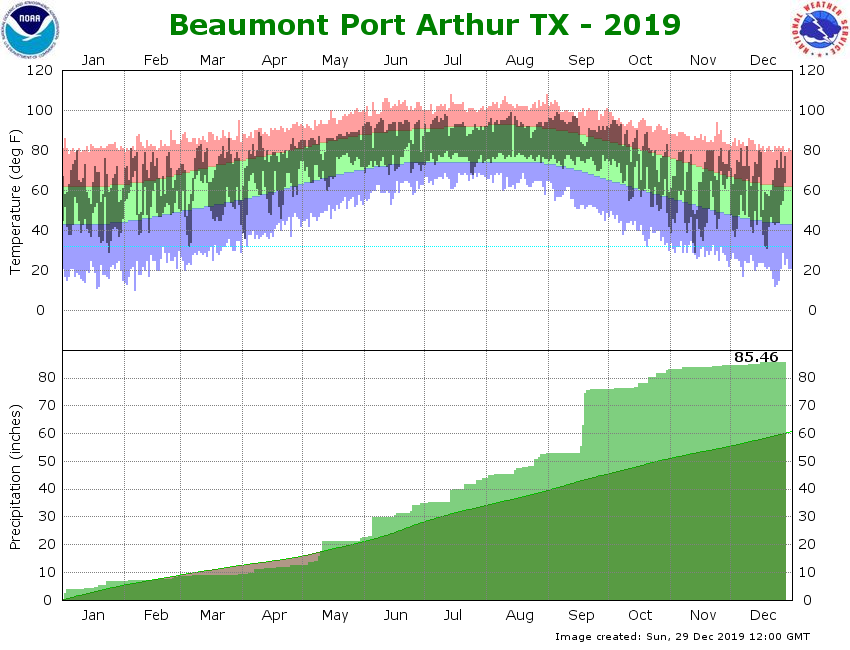 It seems pretty staggering that Beaumont’s three wettest years all occurred within the last years. It is difficult not to believe some kind of climate signal must exist in this data, but I will leave that analysis to actual scientists. Needless to say, this has been the wettest three-year period in the recorded history of Beaumont. Here’s hoping to more normal weather in the years ahead.

Not much to say about today’s weather, which will be splendid in the wake of Sunday’s cool front. Look for sunny skies, with highs in the low 60s, and light northwesterly winds. Overnight lows will get down into the low 40s in the city of Houston—warmer to the north, cooler along the coast.

END_OF_DOCUMENT_TOKEN_TO_BE_REPLACED

Good morning. As we begin to close out 2019, it will continue to feel a bit springlike before a Sunday cold front cools us back off a bit.

Dense fog is the main forecast issue, and it will continue to be the biggest problem today and probably tomorrow. Fog is almost everywhere this morning, and it will be stubborn and slow to clear from inland areas back to the coast. 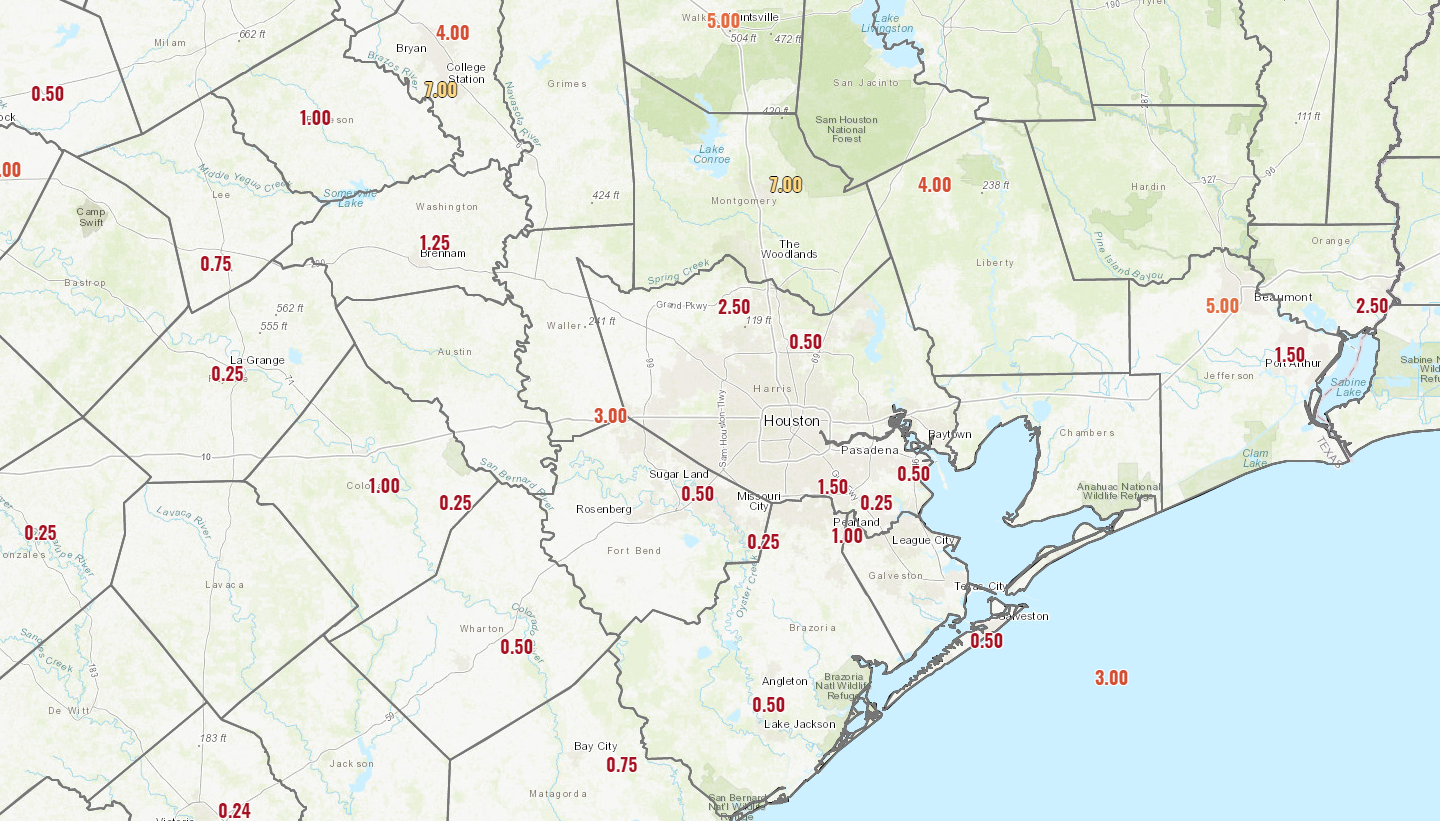 Erratic visibility this morning, sometimes down to a quarter-mile in spots. (NOAA)

Some coastal or bay-adjacent locations and some other places, mainly south and east of Houston may hold on to fog well into this afternoon. Outside of the fog, it will gradually turn partly cloudy and quite mild. We hit 76° yesterday, and we will probably come close to that again today.

Tomorrow should begin similarly to today with widespread fog, especially closer to the bays and coast. Again, that could linger into afternoon. As the day goes on, look for shower chances to slowly increase, mainly north and west of Houston. We’ll start in the 60s Saturday and by afternoon, look for highs perhaps near 80° in Houston. The cold front will push through the Houston area from northwest to southeast between Midnight and 5 AM or so Sunday. During that time, almost everyone should see at least some rain and thunderstorms. 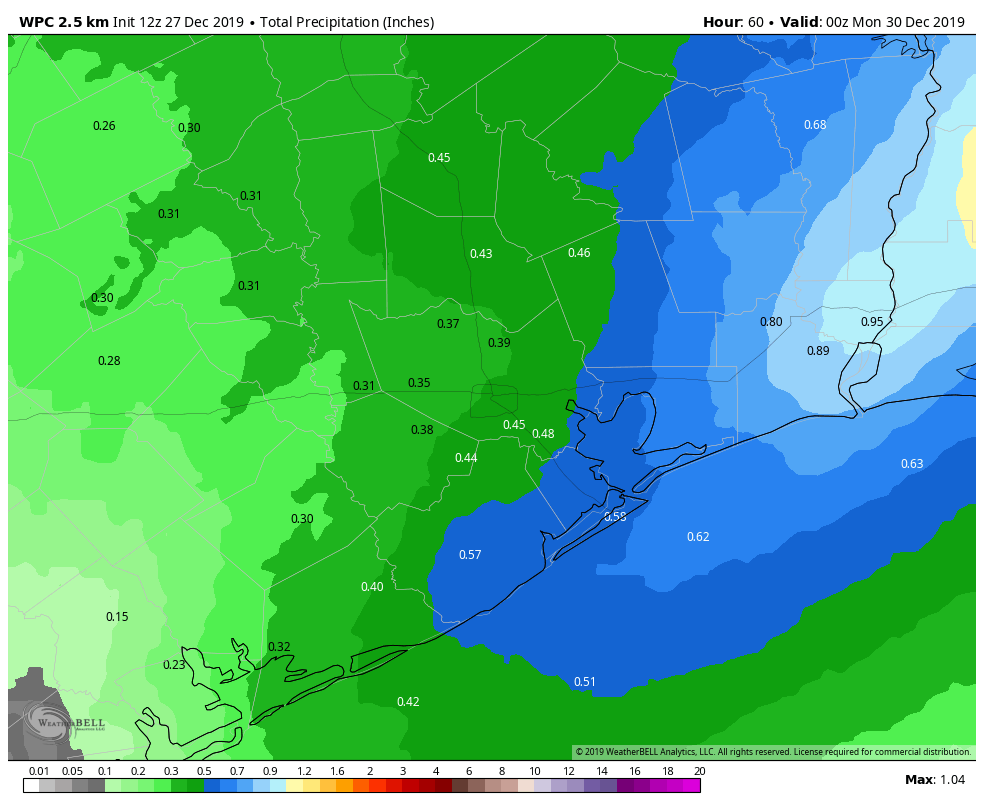 Total rainfall should average between a quarter-inch and half-inch this weekend, with higher amount possible north and east of Houston. (Weather Bell)

We don’t anticipate too much rain when all is said and done, but a quarter-inch to half-inch or so on average, with lower amounts south and west of Houston and higher amounts north and east being the most likely outcome. Any fog risks will end behind the front as well. Some storms, especially north and east of Houston could be a bit strong overnight.

Saturday will warm up from the 60s in the morning into the 70s during the afternoon. Behind the cold front, temperatures will drop into the 50s by Sunday morning.

Some lingering showers are possible Sunday morning. By afternoon, any remaining clouds should rapidly dissipate, and we are going to be left with delightful weather for both the second half of Sunday and Monday. Look for sunshine and high temperatures in the 60s both afternoons. Morning lows will be in the 40s for most folks on Monday morning, though outlying areas could sneak into the upper-30s.

Yesterday, it appeared that a storm system would begin to approach on Tuesday, bringing a slight chance of showers for New Year’s Eve. That has slowed down today, pushing any rain chances to Wednesday. The image below shows the last 6 runs of the European model’s forecast of rainfall from 6 PM to Midnight on New Year’s Eve

Models are trending drier for New Year’s Eve now, holding off on rain until later New Year’s Day. The forecast may change more between now and Tuesday, however. (Pivotal Weather)

What you’re seeing is that until the most recent run, the model indicated shower chances. The latest version holds the rain back for another 12 to 18 hours. What does this mean? It means check back with us on Monday while this system’s timing gets sorted out over the weekend. We don’t trust this model explicitly and would lean toward increasing rain chances after the calendar flips to 2020, with rain becoming most likely during the afternoon and evening hours of Wednesday. Either way, our chances of a widespread, meaningful rain and some thunderstorms continue looking higher as we move into the new year.

Daytime highs should be in the 60s on both days. For New Year’s Eve celebrations, look for temperatures dropping into the upper-40s. We will update this forecast for you on Monday for sure.

Good morning—we hope your Christmas was splendid, and that the rest of the holiday season is wonderful. Unfortunately our forecast will be rather un-festive until Sunday when sunshine and more winter-like weather returns.

Fog is the word of the day, with quarter-mile or less visibility across much of the area with the exception of Galveston, Chambers, and Brazoria counties. With calm winds, clouds could persist well into the mid-morning before finally clearing out some. High temperatures today will rise into the mid-70s under partly to mostly cloudy skies. Low temperatures Thursday night are unlikely to fall below 60 degrees for much of the area, setting up favorable conditions once again for fog development—although likely not so dense as Thursday morning.

After any fog burns off, this should be a gray, humid day, with high temperatures again likely topping out in the mid-70s for much of the region. A few very scattered, brief rain showers are possible. But mostly, the rains should hold off. Friday night will be quite warm, with lows likely only falling into the low 60s for most of the area as clouds persist. 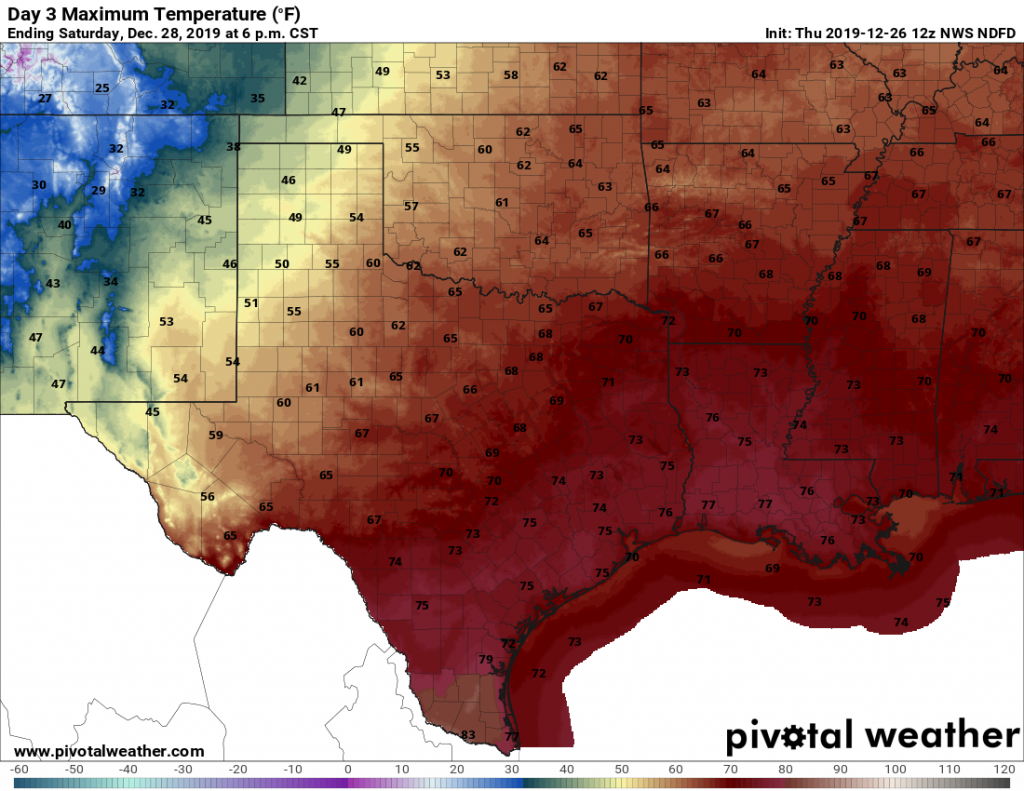 Saturday should be the warmest day of the weekend. (Pivotal Weather)

This will be another day quite a bit like Friday, although rain chances will be a bit better. However things get more interesting on Saturday night, as a cold front pushes through the region. There will be plenty of atmospheric moisture to work with, so the only thing that may inhibit rain chances is a capping inversion that prevents warm air at the surface from rising. The cap likely is to be weaker north of Interstate 10, while possibly holding on a bit longer near the coast. Bottom line? Expect widespread totals of 0.25 to 1.0 inch of rain for inland areas, and perhaps around 0.25 to 0.50 inches closer to the coast from Saturday afternoon through early Sunday morning.

Skies should clear quickly, leaving a lovely winter day with sunshine and highs in the mid-60s and lows probably the 40s. 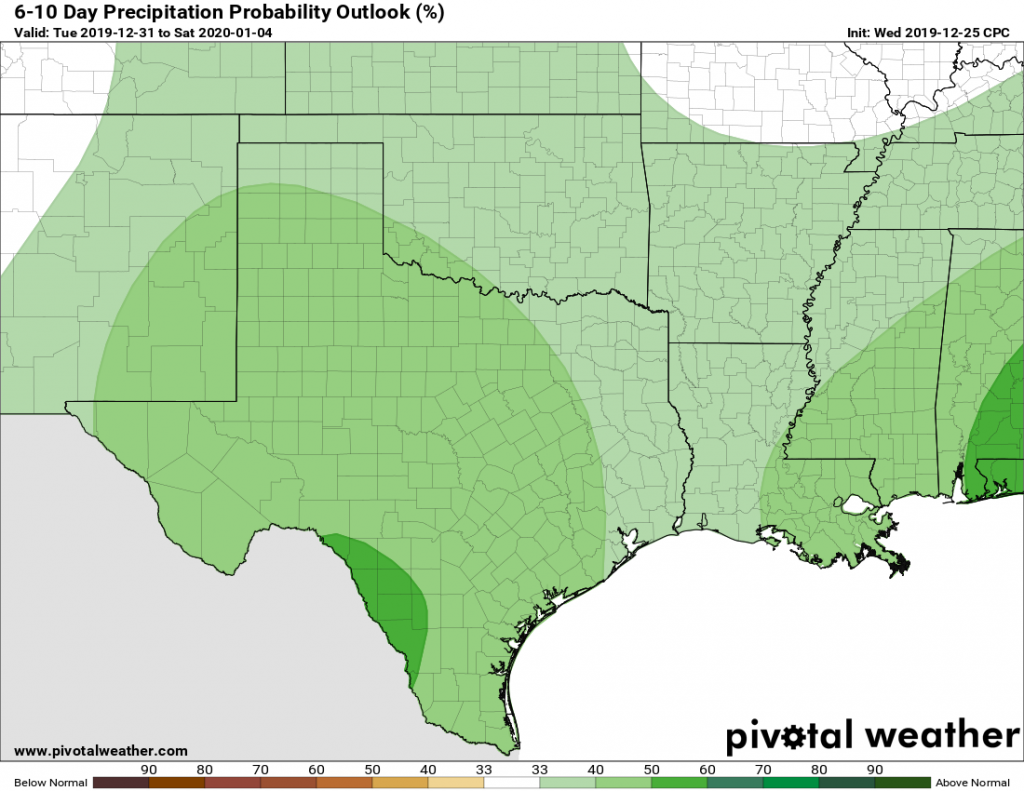 The beginning of the new year looks wet for Texas. (Pivotal Weather)

New Year’s Eve and beyond

So the period from New Year’s Eve through the end of next week is muddled. For now we think New Year’s Eve looks decently sunny, but that could change by the evening as we get into the late-night festivities. New Year’s Day (Wednesday) and Thursday both have the potential to be fairly wet and cool, with (as a very rough estimate) 1-2 inches of rain and highs of perhaps around 60 degrees. In any case, it may well be a happy beginning to the new year for those of you seeking rainfall.