Good evening. We wanted to apprise you of the latest we have for the overnight forecast. Some storms remain to the west and north of Houston as of 6pm CT, but these should wind down during the next couple of hours. Unlike the previous two nights, as of now we do not anticipate any widespread showers or heavy rainfall on Thursday night or the wee hours of Friday morning.

However, the forecast models suggest a deeper area of moisture will push inland near Matagorda Bay or Galveston a couple of hours before sunrise on Friday, and this should bring some additional showers and thunderstorms into Houston throughout the morning. We don’t expect anything too extreme from these storms, with most people seeing 1-2 inches of rain at most. 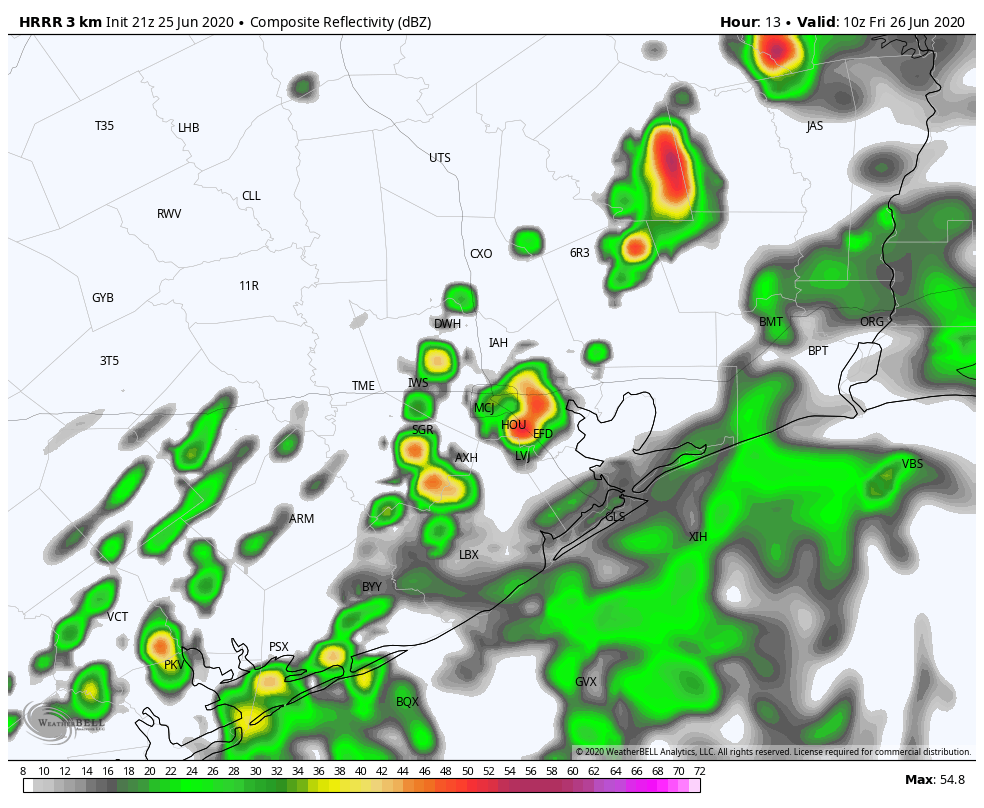 Obviously we’ll have a better handle on Friday’s weather by tomorrow morning, when Matt provides you with an update. But I wanted to let you know that—knock on wood—most of tonight should be relatively sedate for the Houston area, weather wise. It would certainly make for a nice change. And yes, we hope we’re not eating these words tomorrow morning.

Good morning. Very heavy rains have fallen overnight along a nearly stationary boundary that is anchored across west Houston. As a result, as much as 5 to 7 inches of rainfall have come down near Katy and the Addicks and Barker reservoirs. A flash flood warning is in effect for these areas through 10 a.m. Thursday morning, and you can expect widespread street flooding.

The heavy rainfall over the western part of the region should wane somewhat during the daytime hours. However, the overall pattern facing the region remains more or less the same. Very high atmospheric moisture levels coupled with an unstable atmosphere will continue to support heavy rainfall for the next day or two.

While we think there may be something of a break in storms today, another atmospheric disturbance should move into the area tonight, bringing another healthy chance of widespread showers and thunderstorms. It seems unlikely that any areas will see 7 inches more on Thursday night, but this pattern has already shown what it is capable of. Aside from rain chances today, mostly cloudy skies will limit highs in the mid-80s, with a light south wind.

By Friday the threat of heavy rainfall should be declining—although it is not going to go entirely away. The driver of this will be a slowly drying air mass that should help to set an upper limit on rainfall rates. Nevertheless, we still expect fairly widespread moderate showers and thunderstorms on Friday, with cloudy skies and highs in the mid-80s.

END_OF_DOCUMENT_TOKEN_TO_BE_REPLACED

Today ended up being a mostly quiet one again for most of the region, with just a few showers here and there. Rainfall since about 7 AM today has been more than manageable with most areas seeing minor amounts. A couple areas, notably up toward Conroe and south toward Santa Fe and Galveston have seen close to or in excess of an inch of rain since 7 AM today. 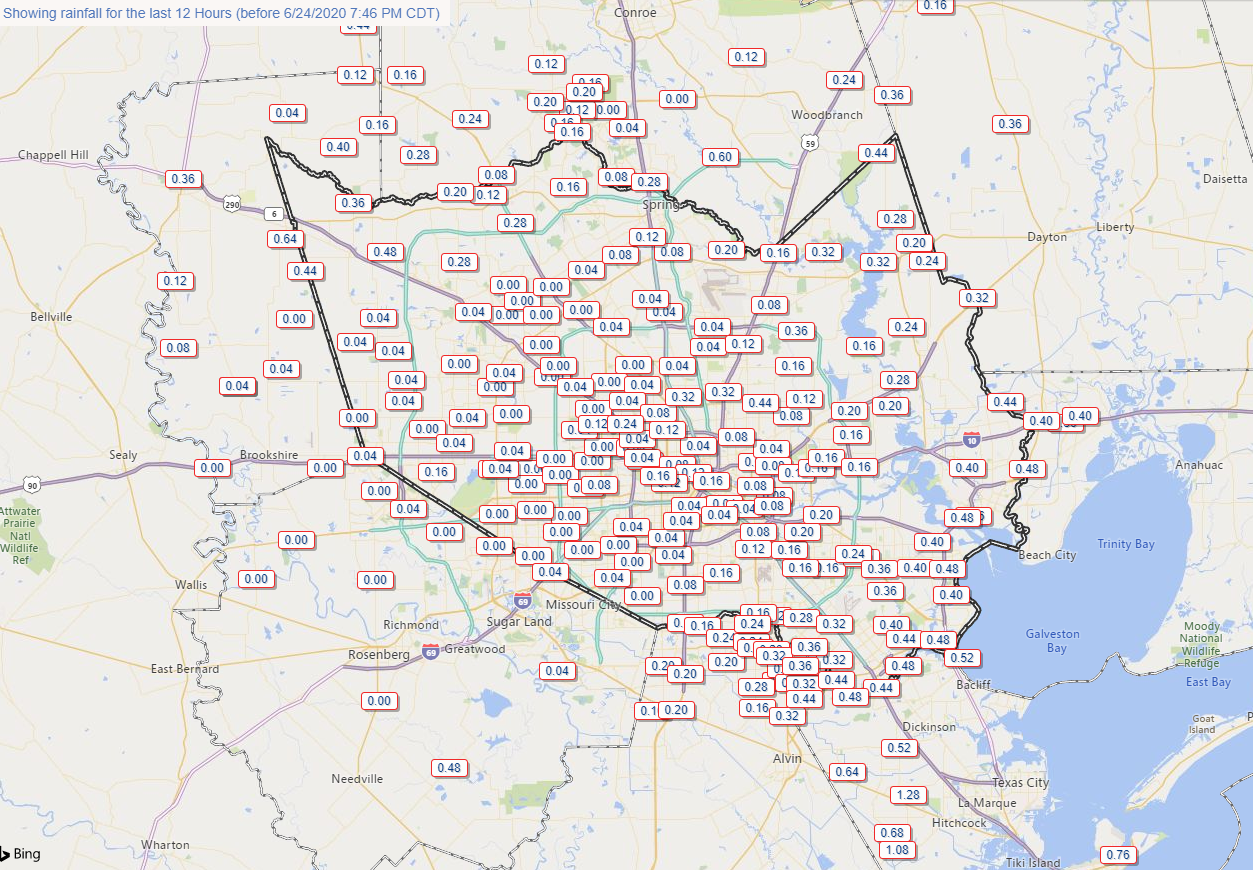 Rain totals since 7 AM have been mostly minor, with a couple exceptions. (Harris County Flood Control)

So we’ve done alright so far. Heading into tonight, I will level with you: Eric and I are scratching our heads a bit. Yesterday, it appeared we had a pretty favorable setup for heavy rain leading into the nighttime, and yes it materialized, but not in the way we were anticipating until late in the game. Tonight we are presented with a set of data that is different than yesterday but does offer up some risk of heavier rainfall in spots.

Brace yourselves, some serious nerd-speak is coming in this paragraph: I just dug through a lot of the meteorology here, and what I’m coming up with does make me think some areas could see some locally heavy rainfall tonight. For one, we have a weak upper level low over Southeast Texas. Those are notoriously fickle systems, and they can become more active at night. Second, it appears there is some sort of weak boundary at the surface that’s roughly along US-59/I-69 from Victoria through Houston that then arcs to the east toward Beaumont. Boundaries like this can act as focusing points for thunderstorms. Third, model parameters suggest a good bit of instability in the atmosphere tonight. Higher instability means thunderstorms can develop and sustain themselves. Fourth, models suggest plenty of atmospheric moisture is available right now. Observations back this up, as the weather balloon launched at 7 PM from Lake Charles shows precipitable water values in the 90th percentile for this time of year, which means if storms can get going, they can rain heavily. Lastly, it appears that winds about 5,000 feet above the surface are going to increase off the Gulf from south to north tonight, aimed east of Houston. Winds at that level can act to provide additional ingredients and moisture needed for heavy rainfall.

This is a long winded way of saying that the meteorology that’s showing up right now backs up the idea that we could see some heavy rainfall tonight.

The question, as always, is can the ingredients actually come together in such a way to allow this to transpire. I really don’t know. These are fickle, tricky situations, so there’s always a chance a few things don’t happen and you end up with a couple isolated showers and storms and that’s that. But, if things do come together, we could be talking about repetitive showers and storms for some areas.

So, for most of the area tonight, let’s just call it a few showers or a storm possible. Some folks will see nothing. Others some heavy rain for a time. Totals of a quarter inch to an inch. 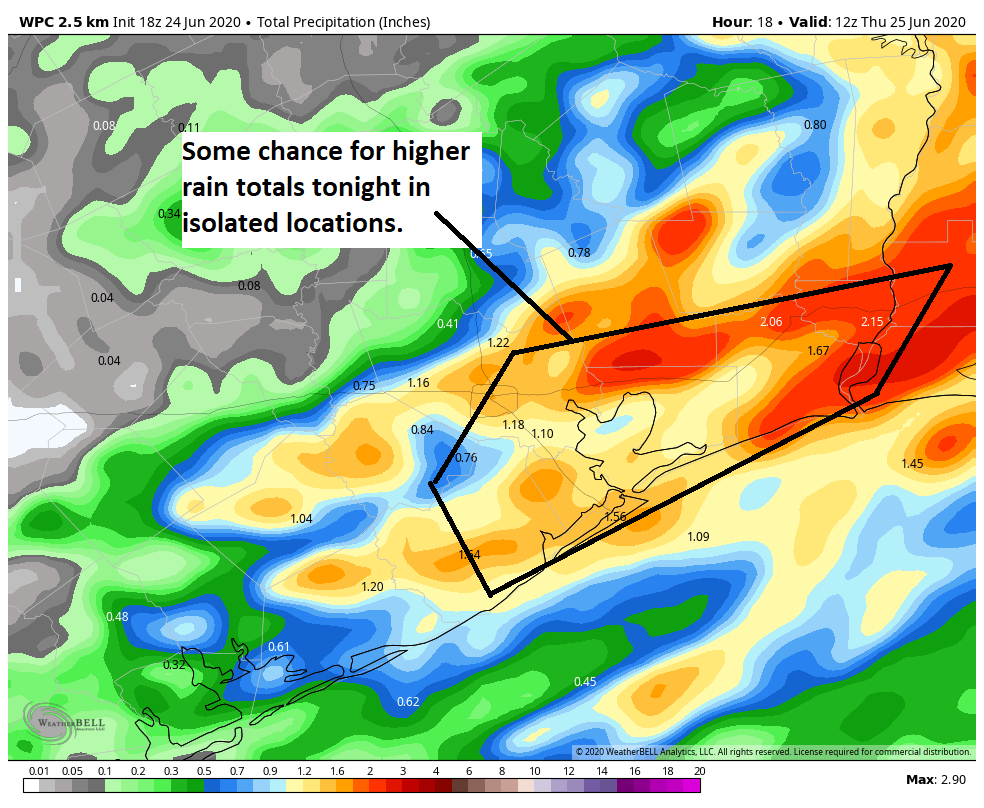 NOAA’s rainfall forecast through Thursday morning at 7 AM shows better odds of heavier rains east of Houston. Most places will just see some sporadic showers, but a few may see some more sustained, heavier rainfall. (Weather Bell)

Put a pin over downtown Houston and if you go south of there and east of there, you stand the chance of seeing perhaps some more sustained rainfall. In those places, I would say your odds of seeing a quarter inch to inch of rain are higher than northwest of Houston. There may also be a few isolated locations that see as much as 2 to 4 inches of rain or a bit more in a worst case scenario. The odds of that happening are not high, but as I laid out above, the ingredients are certainly in place. If I had to focus on an area tonight for the highest risk of this it would be from Baytown to Beaumont.

Anyway, we just wanted to provide some situational awareness for you this evening. Be safe!

Good morning. Houston’s wet pattern will continue through the work week, although the most organized heavy rainfall should wind down over the course of this morning after a storm system pushes through the area. Please take care if you have cause to be out and about this morning before conditions should improve later today.

Moisture continues to move in from the Gulf, combining with an upper-level storm system to bring heavy rains to the metro area on Wednesday morning. The heaviest rains are generally to the south of the city now, and this mess should slowly begin to slide generally eastward, exiting the area entirely by 9 a.m. or 10 a.m. In the meantime, these storms should put a manageable 1 to 3 inches of rain down for most of the metro area—with the heaviest rains coming and lingering near the coast. 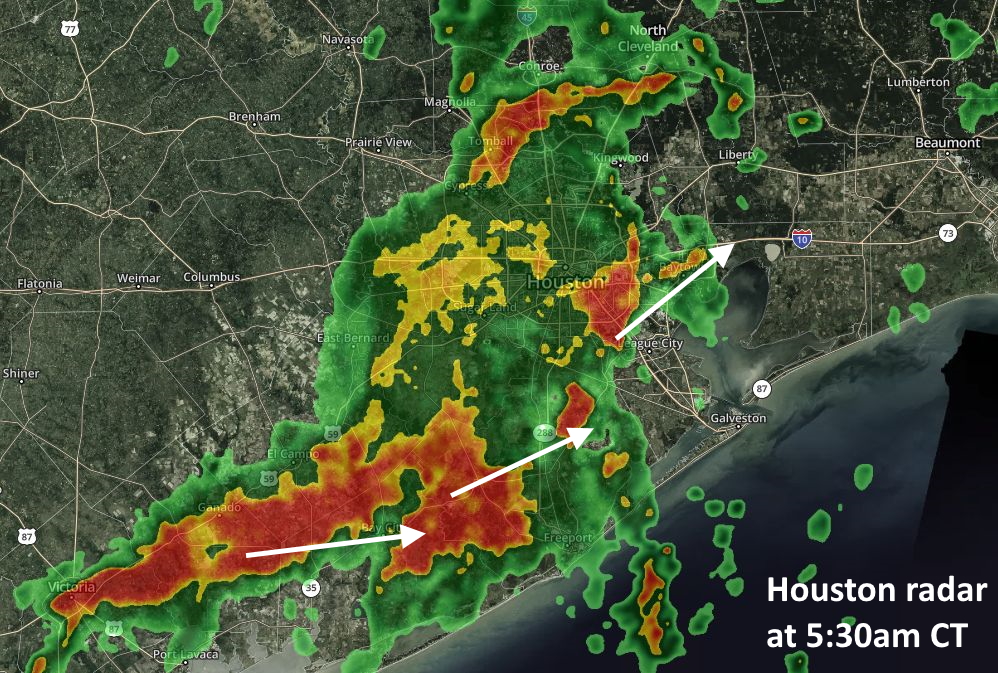 Storms are rotating around an upper-level low on Wednesday morning. (KKTV)

Although this will end our Stage 1 flood event, the rain won’t be over. Even as the storm system rotates away from Houston, additional moisture will be pulled inland and more showers will likely develop this afternoon. We’re not sure about this, because the atmosphere should be somewhat stabilized after this morning. In any case, storms this afternoon should be less organized. Highs today will likely only reach the mid-80s with cloud cover and rain.

Healthy rain chances continue on Thursday, with a higher likelihood of moderate-to-heavy rain along the coast where moisture levels should be highest. Accumulations should be less than on Wednesday, however. Temperatures should remain in the upper 80s for most with cloudy skies.